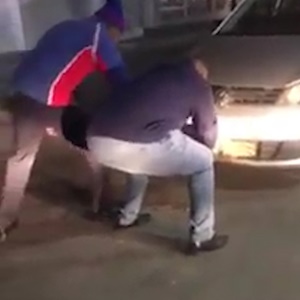 Aardwolf being removed. (Screengrab via News24)

A Vryburg driver and a petrol attendant were shocked and surprised to find an aardwolf tucked away in the grill of a VW Polo on June 20.

Daniel Phathadi from the Engen Vryburg Convenience Centre noticed the animal in the vehicle's grill at around 20:00. The car's skittish driver was too afraid to remove it, which he at first thought was a monkey.

The two got to work, prising the animal from the car.

"I thought it was a monkey. I was scared. When we pulled it out, it looked like a dog," Phathadi told News24.

Once removed, the aardwolf rolled on the ground - seemingly disoriented - before running off.

Dr Karin Lourens from the Johannesburg Wildlife Veterinary Hospital told News24 the animal's size and black-tipped tail fitted the description of an aardwolf.

A member of the hyena family, aardwolfs are harmless creatures that live off termites and ants.

"Despite the fact that the aardwolf looks dangerous, it actually isn't," the SPCA's Ellie Potgieter told News24.

"They are awesome little creatures, that don't even grow up to 1m in height," she said.

Lourens gave drivers, who find themselves in a similar situation, the following advice: "Drive to a quiet area, switch off your car and wait for the aardwolf to get out by itself."

"No matter what situation you are in with an animal, if you are unsure what to do, you can contact the Johannesburg Wildlife Veterinary Hospital 24 hours a day on 071 248 1514," she said. (Video credit: MIKI via Facebook.)

We live in a world where facts and fiction get blurred
In times of uncertainty you need journalism you can trust. For 14 free days, you can have access to a world of in-depth analyses, investigative journalism, top opinions and a range of features. Journalism strengthens democracy. Invest in the future today. Thereafter you will be billed R75 per month. You can cancel anytime and if you cancel within 14 days you won't be billed.
Subscribe to News24
Related Links
WATCH: 2.5m black mamba 'knocks' on sliding door in Verulam, KZN
Next on News24
PODCAST | The Story: DNA evidence crucial in Krugersdorp gang rape case