WATCH: 'We are not going anywhere, Olievenhoutbosch is our home' - illegal land occupiers 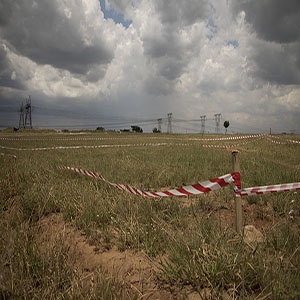 Land invaders tape their pieces of land in Olievenhoutbosch in Midrand

Land invaders in Olievenhoutbosch in Midrand were adamant on Monday afternoon that they would not be forcibly removed by the government or the police.

People had made their way into the area, along the R55 and west toward Diepsloot and into Mnandi, early on Friday morning, March 9. By Saturday afternoon, they had occupied large tracts of land; each piece was marked with red-and-white barrier tape.

Police and residents had removed markers in certain areas on Monday.

On Monday afternoon, Jack Kgosana had allocated to himself a piece of ground, measuring 15m by 25m.

We live in a world where facts and fiction get blurred
In times of uncertainty you need journalism you can trust. For only R75 per month, you have access to a world of in-depth analyses, investigative journalism, top opinions and a range of features. Journalism strengthens democracy. Invest in the future today.
Subscribe to News24
Related Links
WATCH | Malema: Land without compensation non-negotiable
WATCH: Land expropriation without compensation: What needs to happen to amend Constitution
Next on News24
WATCH | Mamma Delft keeps matriculants motivated with daily breakfast

Lekker Saturday for 2 Daily Lotto players!
Full list of lottery results
Lockdown For
DAYS
HRS
MINS
Voting Booth
President Ramaphosa has punted the idea of mandatory Covid-19 vaccinations for South Africans. This is:
Please select an option Oops! Something went wrong, please try again later.
The right thing to do. We desperately need more South Africans vaccinated to prevent further mutations and restore normality in our lives.
71% - 9501 votes
A risky strategy. Compulsory vaccinations may have unintended consequences and damage our rollout campaign.
29% - 3813 votes
Previous Results
Podcasts
PODCAST | The Story: The Omicron variant and what we know so far