The day started with funerals for some of the 158 people killed by Tuesday's monster blast, but turned to fury when the largest anti-government protest in months escalated.

With security forces focused on a large gathering at the Martyrs' Square protest hub, a group led by retired army officers snuck into the foreign ministry and declared the building a "headquarters of the revolution".

The stunt, which marked a new development in the strategy of a protest camp whose 17 October uprising had lost steam lately, was facilitated by the damage the port blast shockwave had inflicted on the building. But the takeover lasted barely three hours.

Large army reinforcements using rubber bullets and tear gas drove out the roughly 200 protesters, who only had time to chant celebratory slogans against the government and burn a portrait of President Michel Aoun. At one point, protesters had stormed or taken over four key official buildings.

We are officially at war with our government.

Separate groups of protesters also stormed the economy ministry, the Association of Banks in Lebanon and the energy ministry before being forced out by the army shortly afterwards.

The latter is the focus of particular anger from the population, which has in recent months been subjected to worse than ever power cuts due to the de facto bankruptcy of the state.

"They ruled Lebanon for 30 years, now Lebanon is ours," said one protester speaking on live Lebanese television broadcasts.

"We entered the energy ministry and we are here to stay." A protester runs with a flare while marching against Lebanese Army soldiers while demonstrating against the government in Beirut, Lebanon on 8 August 2020.
Getty Images PHOTO: Daniel Carde/Getty Images

The Association of Banks in Lebanon, another obvious target for protesters who have routinely nicknamed their rulers "the government of banks", was ransacked, an AFP reporter said.

By 22:30 (19:30 GMT) however, protesters had been dispersed and security forces deployed across the city, where the broken glass and rubble from Tuesday's disaster mixed with the smoking remains of a night of rage.

The rallies claimed a human toll too, with one police officer falling to his death following an "assault" by "rioters", the police said.

Dozens of people wounded during the violence also needed treatment in hospitals already bursting with the injured from Tuesday's blast and coronavirus patients.

On Sunday, French President Emmanuel Macron would host US President Donald Trump in a UN-backed virtual conference to drum up aid for crisis-stricken Lebanon.

Macron, the first world leader to visit Beirut after the explosion, has warned Lebanese leaders that the billions of dollars in available aid would not be forthcoming if the Lebanese state did not implement deep changes.

France also said it would charter a cargo ship to transport food, medicine and reconstruction materials to the country. 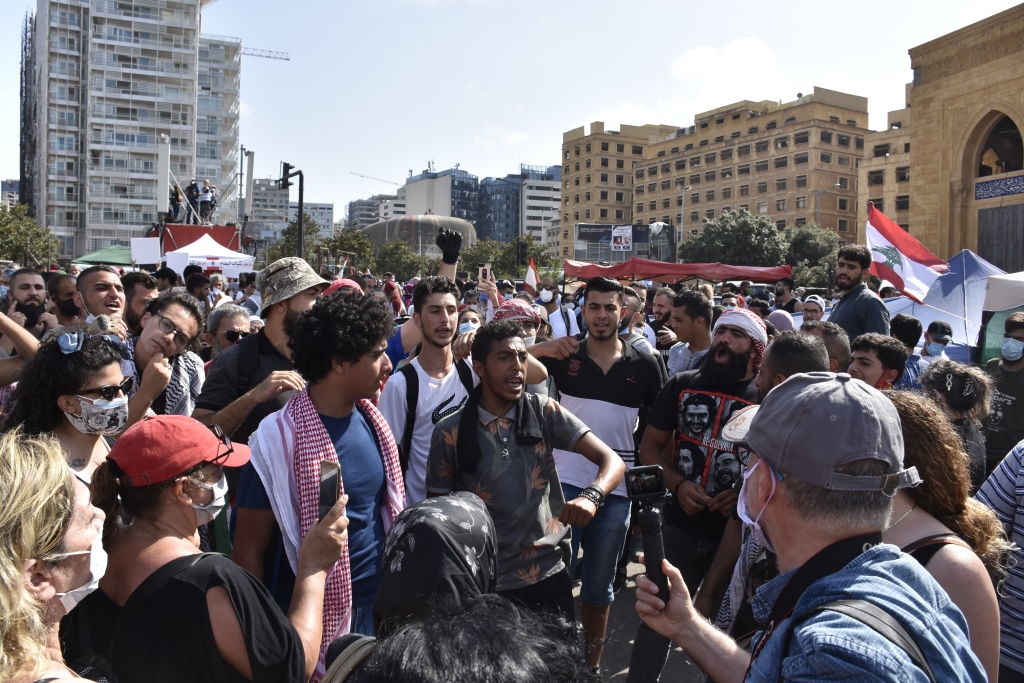 Thousands gather at the Martyrs' Square to protest the political figures and officials they blame for the deadly explosion at the Port of Beirut.
Getty Images PHOTO: Mahmut Geldi/Anadolu Agency via Getty Image

Under increased pressure from the street, which wants heads to roll over the Beirut port tragedy, and foreign partners exasperated by the leadership's inability to enact reforms, Prime Minister Hassan Diab's government was fraying at the edges.

A bloc of three MPs from an opposition Christian party resigned from parliament on Saturday, bringing to five the number of lawmakers to quit since the 4 August explosion.

Crippled by debt and the local currency's nosedive, and threatened by a spike in Covid-19 cases, Lebanon can ill afford international isolation, but its hereditary ruling class is digging its heels in.

'Prosecution of all the corrupt'

Many Lebanese have urged foreign powers not to funnel more money into what they say are thieving and incompetent hands.

"We call on all the anguished Lebanese people to take to the streets to demand the prosecution of all the corrupt," said Sami Rammah, the retired general who spearheaded the short-lived occupation of the foreign ministry on Saturday. Near the massive crater caused by Tuesday's explosion, whose shockwave was felt on the island of Cyprus, teams of Lebanese and foreign rescuers were digging through the rubble in a push to find survivors.

According to the health ministry, at least 158 people were killed and 6 000 were wounded by the blast, which in a few seconds levelled the port and sowed as much destruction in some areas as 15 years of civil war had done a generation ago.

Syrian authorities said over 40 Syrians were among the dead, though it was unclear if they were part of the Lebanese health ministry's tally.

The Netherlands also announced that its ambassador's wife had died on Saturday of injuries sustained in the blast.

We live in a world where facts and fiction get blurred
In times of uncertainty you need journalism you can trust. For only R75 per month, you have access to a world of in-depth analyses, investigative journalism, top opinions and a range of features. Journalism strengthens democracy. Invest in the future today.
Subscribe to News24
Related Links
Group of protesters take over Lebanon foreign ministry as protest flare up in wake of horror blast
Beirut blast: Death toll rises to 158 as police clash with disgruntled citizens
More than 60 still missing after Beirut mega-blast: ministry
Next on News24
US sets single-day record for Covid-19 cases during new surge with over 84 000 new infections