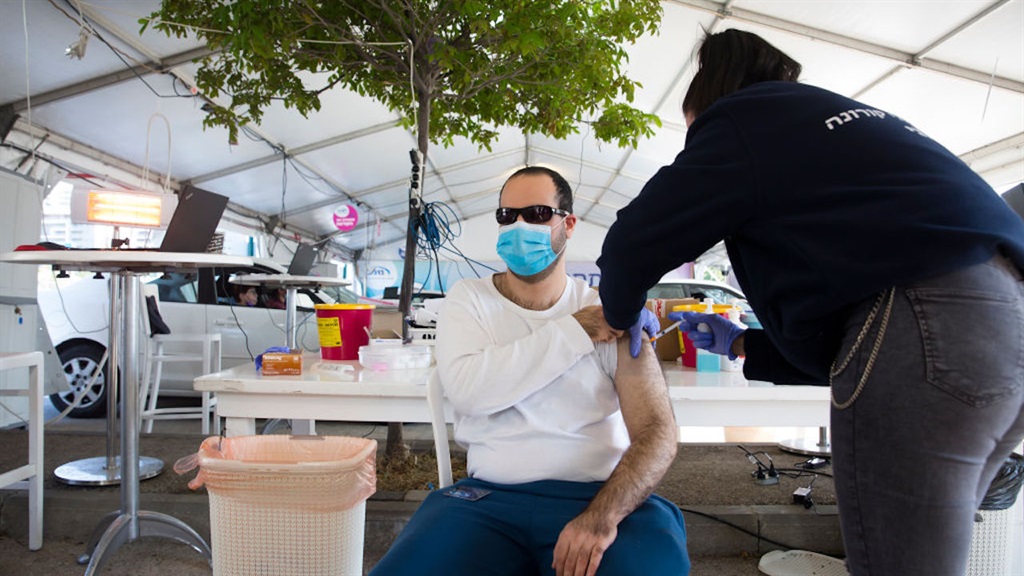 An Israeli man receives a coronavirus vaccine dose from medical staff at a Covid-19 vaccination centre on 31 December 2020 in Haifa, Israel. (Photo by Amir Levy/Getty Images)

The head of international relations in the Israeli Ministry of Health Dr Asher Salmon has said the cost of the Covid-19 vaccine is "ridiculously low" in comparison to the economic damage brought on by national lockdowns.

"Just to mention this understanding that is important to everybody – the price of [the] vaccine [is] so ridiculously low in comparison to the terrible economical damage of every day of national closure (sic)... [W]e have to find a way to vaccinate the whole world," he said.

"We will not get rid of this without vaccinating every society and every community of the world and all of us should do the best of taking it (sic)."

Salmon was responding to a question from a journalist on the cost of the vaccine paid by the country during a virtual briefing on the vaccination campaign in Israel on Thursday.

Israel has been praised in various international media reports for leading the world in vaccinating its population.

According to Vox News, Israel's vaccination rate is nearly 7 times that of America. The country reportedly gave vaccine shots to approximately 150 000 people per day over the past few weeks.

The campaign, which began in December, has seen more than 20% of Israel's population receive the first dose of the Covid-19 vaccine, the publication further reported.

READ | Will vaccines work against the new Covid variants? Scientists race to find out.

According to Salmon, Israel had its first confirmed case of Covid-19 at the end of February, though it started preparing to tackle the disease in mid-January when it first got information from Wuhan, China.

He added that the country began investigating the field of vaccines early and got its first initial quotes in April.

"It was clear for us that we have to prioritise [the] groups of individuals in the country to prioritise our plan of vaccination. We decided to start with medical personnel and at the same time to start immediately with vaccinating those above the age of 60," he explained.

Salmon cited many factors in its successful vaccination campaign, including media work and information.

READ | Vaccines due in weeks or months not yet Africa’s way out of pandemic, officials say

It was really clear that we have to prepare the ground and convince the public that vaccination is important, but rather also convincing them that we have enough data to support this operation, that these vaccines are safe, create good transparency of everything which is happening. It was not easy.

The country, which has 350 vaccination points, made use of technological tools to schedule appointments. Citizens have access to the Health Maintenance Organisation (HMO), which provides services to the entire population.

"There is an HMO app, which has the option of booking a vaccination session for every individual. For the elderly, these tools weren't easy so a call centre was used," Salmon explained.

When probed on the apparent success of Israel's vaccination campaign, he said: "[There are] two reasons: the fact that we are working as a multi-agency task force, where we are bringing to the table not only the health, the police, Ministry of Defence and many other services. We are a giving a lot of responsibility to the HMOs [that] are running the community.

"[And] two, it is the combination of good precise planning and keeping up space for flexibility," he said.

We live in a world where facts and fiction get blurred
In times of uncertainty you need journalism you can trust. For 14 free days, you can have access to a world of in-depth analyses, investigative journalism, top opinions and a range of features. Journalism strengthens democracy. Invest in the future today. Thereafter you will be billed R75 per month. You can cancel anytime and if you cancel within 14 days you won't be billed.
Subscribe to News24
Related Links
Covid-19 wrap: UK bans travel from 11 African countries, record deaths in US, Sinovac vaccine...
Israel bans SA visitors amid new Covid-19 variant concerns
Facebook removes anti-vaccine 'fake news' in Israel, government says
Next on News24
DEVELOPING | 3 dead, 6 hurt as Russia bombs Ukraine's Kherson