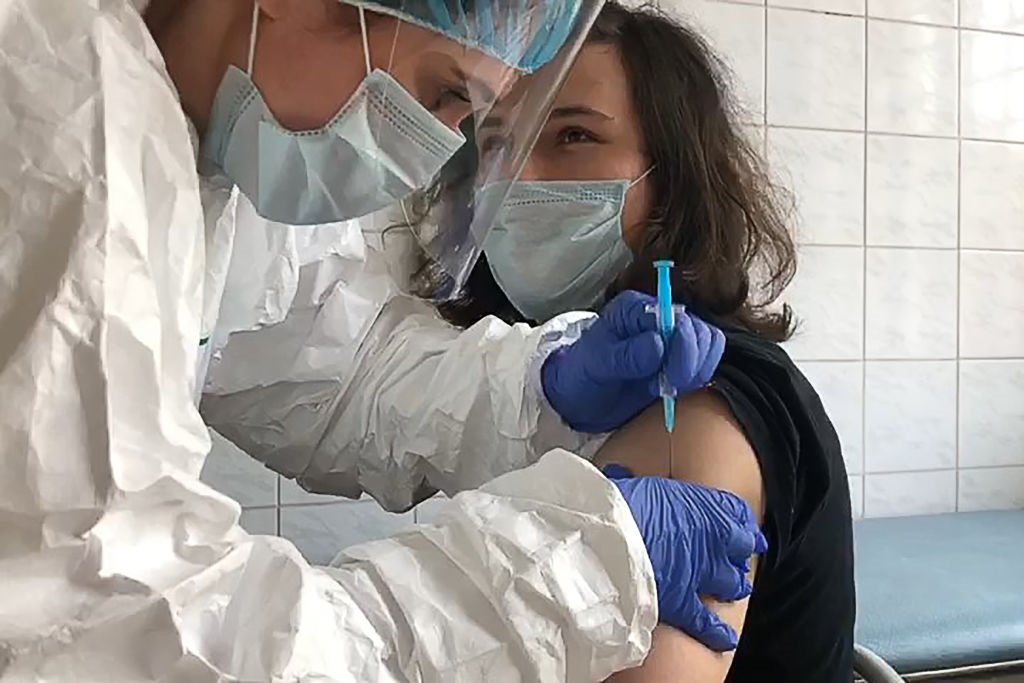 A volunteer receives a Covid-19 as part of clinical trials in Russia.
Sechenov Medical University Press Office\TASS via

A combination of eased restrictions, less strict rule-following in summer and increased testing explains the rising number of Covid-19 cases seen around Europe, the European chapter of the World Health Organisation (WHO) said Thursday, reports AFP.

Nevertheless, deaths have not kept pace even as countries around Europe have seen an increase in cases.

Richard Peabody, epidemiologist leading the High Threat Pathogens Team at the WHO Regional Office for Europe, insists "there is no suggestion of an overall change in severity (of the virus)."

Rather, the lower death rate can in part be explained by the disease spreading among young people, who are generally spared the most severe symptoms and suffer a lower mortality rate.

The WHO now fears people will become more lax about measures and recommendations aimed at curbing the spread.

"The key message is if you take... the pressure off the virus, then it will come back," he said calling on European governments to be mindful of the lessons learnt in the first months of the pandemic.

According to the WHO, nearly 3.7 million cases of Covid-19 have been recorded in Europe since the start of the pandemic, and 218 383 deaths.

AFP reports that Spain's Canary Islands said on Thursday it would ban smoking outdoors when social distancing cannot be guaranteed to curb the coronavirus, a day after Galicia took a similar measure.

The smoking ban will come into effect on Friday along with mandatory wearing of face masks in all public spaces, Canaries regional leader Angel Victor Torres said.

The Canary Islands, a tourism hotspot off northwest Africa, had been the only Spanish region where it was not obligatory to use face masks.

Officials in regions including Madrid and Andalusia said they were considering similar smoking restrictions.

A smoking ban in the northwestern region of Galicia, best-known as the destination for pilgrims hiking along the Camino de Santiago, came into force overnight.

The Galician law also forbids smokers from removing masks to smoke in public if it is not possible to maintain a distance of two metres between people, in what is believed to be the first such restriction in Europe.

Galicia and the Canaries are among the least-affected regions of Spain, the country with the highest number of infections in Western Europe.

AFP reports that Finnish health authorities recommended Thursday that people begin wearing masks in public places, after months of claiming there was insufficient evidence to justify their use.

Mika Salminen, director of health security at Finland's public health body THL, said "evidence of masks' effectiveness is not particularly strong" but "even small additions to our range of available options are justified."

After only a trickle at the start of the summer, Finland is now experiencing an increase, with 219 new confirmed coronavirus cases in the last fortnight.

However, the Nordic country still has one of Europe's lowest incidences of the virus according to the WHO.

Earlier in the pandemic, Finnish health authorities rejected the idea of a mask policy, insisting that wearing the face coverings could in fact exacerbate the spread of the virus if they were handled improperly.

The app was supposed to be the linchpin in Prime Minister Boris Johnson's plan for a "world beating" Covid-19 test-and-trace system that would control local flare-ups of the virus and allow the economy to reopen.

But it has been dogged by problems.

An earlier version developed by the National Health Service missed its May target, and in June the government abandoned the centralised technology it was pursuing in favour of a decentralised system developed by Apple and Google.

The revamped app will be trialled on the Isle of Wight off southern England, where a previous version was also tested, and by health workers before being rolled out in the east London borough of Newham to assess how it works at scale.

A national launch date has not been set.

The government said it was confident the new app would detect when a user had been in close proximity to somebody who had tested positive, with seven-out-of-10 contacts within 2 metres correctly notified.

"We've worked with tech companies, international partners, privacy and medical experts to develop an app that is simple to use, secure and will help keep the country safe," Health Minister Matt Hancock said.

The app records the duration and distance of contacts - for example on a bus - using bluetooth technology and alerts a user if one of their contacts later tests positive for Covid-19. All users remain anonymous and the health ministry stressed that "it tracks the virus, not people".

We live in a world where facts and fiction get blurred
In times of uncertainty you need journalism you can trust. For only R75 per month, you have access to a world of in-depth analyses, investigative journalism, top opinions and a range of features. Journalism strengthens democracy. Invest in the future today.
Subscribe to News24
Related Links
Covid-19 wrap: Polish draft bill allows breaking law to fight virus, UK in deepest ever recession
Covid-19 wrap: World reacts to Russia's vaccine, new cases spell uncertainty for elections in NZ
Covid-19 wrap: WHO doesn't know enough to evaluate Russia's vaccine, UK's pupils return to school
Next on News24
FACTBOX | US ships Covid-19 vaccines to SA: What you need to know about the coronavirus right now

Lekker Friday for two Daily Lotto winners!
Full list of lottery results
Lockdown For
DAYS
HRS
MINS
Voting Booth
Should Covid-19 vaccinations be mandatory for employees in workplaces?
Please select an option Oops! Something went wrong, please try again later.
Yes, it is the responsible thing to do
45% - 829 votes
No, vaccination should be an individual choice
44% - 808 votes
No, but those who are unvaccinated should have to work from home
11% - 202 votes
Previous Results
Podcasts
PODCAST | The Story: Why did SA's security agencies fail to avert the looting chaos?