Traders, self-employed workers, street vendors in the trade fair sector, protest in front of Montecitorio against the Government and the imposed closures in Rome, Italy.
Simona Granati - Corbis/Getty Images

Reuters reports that hospitals in many Iranian provinces are running out of capacity to handle Covid-19 cases, health authorities say, with novel coronavirus now killing around 300 people a day or one person every five minutes.

Authorities have complained of poor social distancing, and deputy health minister Iraj Harirchi said the pandemic could cause 600 daily deaths in coming weeks if Iranians failed to respect health protocols in the Middle East's hardest-affected country.

A caption that ran on state television news said an Iranian died of novel coronavirus every five minutes, a rate that corresponds to daily death tallies reported by the authorities of just above or below 300 over the past 20 days.

Health Ministry spokesman Sima Sadat Lari told state TV on Sunday that 32 616 people had died of the disease and the number of confirmed cases had reached 568 896.

Some experts have doubted the accuracy of Iran’s official coronavirus tolls. A report by the Iranian parliament’s research centre in April suggested that the coronavirus tolls might be almost twice as many as those announced by the health ministry.

The report said that Iran’s official coronavirus figures were based only on the number of deaths in hospitals and those who had already tested positive for the coronavirus.

Schools, mosques, shops, restaurants and other public institutions in Tehran have been closed since 3 October.

Reuters reports that European leaders warned of a bleak winter as resurgent Covid-19 infections forced countries to impose new restrictions to try to curb a second wave of the pandemic, with the United States and France setting new daily records for cases.

More than 42.9 million people have been reported to be infected by the coronavirus globally and 1 151 929 have died, according to a Reuters tally as of Monday afternoon, with the United States leading with the highest number of deaths and infections.

Word that a vaccine being developed by the University of Oxford and AstraZeneca Plc produced immune responses in both elderly and young people offered some positive news as autumn turns to winter in the Northern Hemisphere. Workers of the City Property Management Committee in Russia check compliance with the face mask requirement at a store during the Covid-19 pandemic.
Getty Images Sergei Konkov\TASS via Getty Images

In Europe the picture was unrelentingly grim as a string of countries reported record increases, led by France, which posted more than 50 000 daily cases for the first time on Sunday, while the continent passed the threshold of 250 000 deaths.

Governments have been desperate to avoid the lockdowns which curbed the disease at the start of the year at the cost of shutting down their entire economies. But the steady rise in new cases has forced them to tighten curbs.

Stay-at-home orders for Melbourne's five million residents will be lifted from midnight Tuesday into Wednesday while restaurants, beauty salons and retail stores will be permitted to throw open their doors.

Announcing the much-anticipated relaxing of restrictions, Victoria state Premier Daniel Andrews' voice cracked as he declared it an "emotional day".

"This has been a very difficult year. And Victorians have given a lot and I'm proud of every single one of them," he told reporters in Melbourne.

Reuters reports that Bulgarian schools will be allowed to switch to online studies, the education ministry said on Monday, as the Balkan country struggles to contain a new surge in coronavirus infections.

Bulgaria, like most of the European Union, is seeing a sharp rise in infections, with the total number of confirmed cases almost doubling to 37 889 since the start of October. 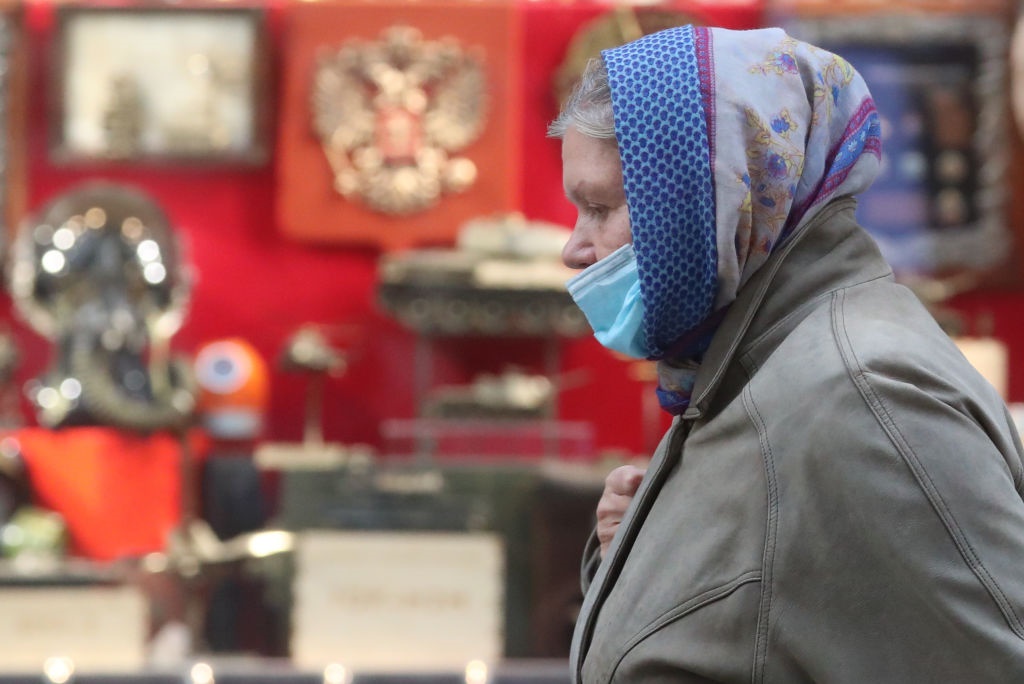 An elderly woman wears a face mask in Russia during the Covid-19 pandemic.
Getty Images Sergei Fadeichev\TASS via Getty Images

The ministry said school heads in areas with high numbers of infections, like the capital Sofia, could choose to switch to distance learning if they see a rising number of abstentions due either to infections or quarantines.

Reuters reports that Covid-19 infections rose by 17,440 over the weekend, Swiss health authorities showed on Monday, as the government considers tightening restrictions meant to slow the accelerating spread of Covid-19.

The total confirmed cases in Switzerland and tiny neighbouring principality Liechtenstein rose to 121 093, and the death toll jumped by 37 to 1 914.

Reuters reports that Italy will present a package of measures on Tuesday to support businesses hit by new restrictions aimed at reining in a second wave of Covid-19, officials said, at a time of mounting protests against the curbs across the country.

Rome on Sunday ordered bars and restaurants to close by 18:00 and shut gyms, cinemas and swimming pools to try to halt a rapid resurgence in the coronavirus that has jacked up daily infection rates to new records.

Demonstrators gathered in several cities during the weekend to protest against the closures and the nightly curfews imposed in some regions, with clashes breaking out in the southern city of Naples and in the capital Rome.

The cabinet was expected to meet on Monday or Tuesday to approve measures worth some 4.5-5 billion euros ($5.3-5.9 billion) for companies affected by the restrictions, including new funds for furlough schemes.

"We had invested a lot of money to comply with security protocols after the first virus wave. Many of us have never reopened and now they hit us again," said Paolo Graziani, owner of the pizzeria Inforno in Ostia, Rome's seaside neighbourhood.

Economy Minister Roberto Gualtieri said on Sunday the national tax agency would aim to pay out compensation by mid-November or the end of the year at the latest, but Graziani was sceptical.

Reuters reports that Russia's daily tally of new Covid-19 cases soared to a record high of 17 347 on Monday as the Kremlin warned the pandemic was beginning to inflict a greater toll outside the capital Moscow.

Authorities say Russia has enough hospital beds and medication to tackle the second wave of the coronavirus outbreak. But Kremlin spokesperson Dmitry Peskov said "extremely energetic" efforts from both the federal and regional governments were now needed to cope with rising case numbers.

"The situation is quite serious," Peskov told reporters on a conference call. "The epidemic has stricken the regions, it has gone east of Moscow."

Russian media reports suggest some regions are struggling to withstand the pressure on their health system.

Authorities in the capital have opened temporary hospitals, ordered businesses to have at least 30% of staff working remotely and directed the city's sprawling metro system to turn away commuters with high body temperatures.

We live in a world where facts and fiction get blurred
In times of uncertainty you need journalism you can trust. For only R75 per month, you have access to a world of in-depth analyses, investigative journalism, top opinions and a range of features. Journalism strengthens democracy. Invest in the future today.
Subscribe to News24
Related Links
Covid-19 wrap | Germany readies for vaccine before end of year, Poland restricts gatherings to 5
Covid-19 wrap | China to maintain ban on outbound tours, Germany issued travel warnings for regions
Covid-19 wrap | India to roll out paper test, US reports about 300 000 more deaths than expected
Next on News24
Covid-19: Two vaccines could be available in US before Christmas