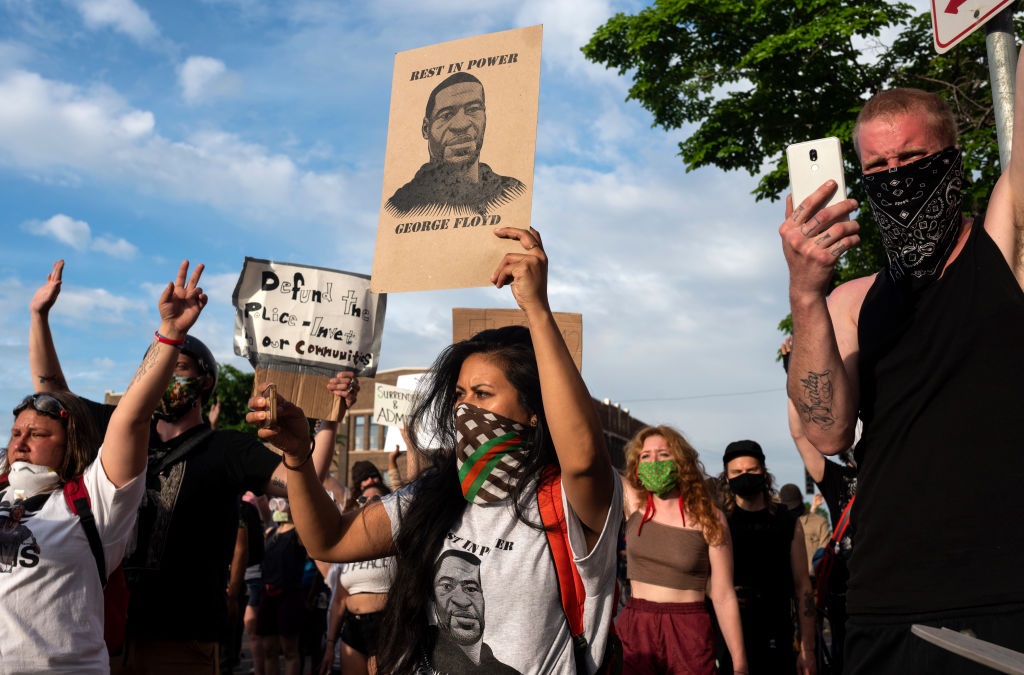 Protesters confront police outside in Minneapolis, US, in the wake of the George Floyd killing in May 2020.
Stephen Maturen/Getty Images

The jury in the high-profile trial of the Minneapolis police officer accused of killing George Floyd was shown the stomach-churning video on Monday of the death of the 46-year-old black man.

"Nine minutes and 29 seconds. That's how long that went on," prosecutor Jerry Blackwell said of the amount of time Minneapolis police officer Derek Chauvin spent with his knee on Floyd's neck.

In the video, the jury could hear Floyd, handcuffed and pressed to the pavement, moaning and gasping for breath while bystanders urged Chauvin to let up.

Chauvin, dressed in a gray suit with a blue tie, was at the defense table while the video was played and took occasional notes on a yellow legal pad.

Chauvin, a 19-year veteran of the police force, is charged with murder and manslaughter and faces up to 40 years in prison if convicted of the most serious charge - second-degree murder.

Blackwell said in his opening statement that the 44-year-old defendant was not following police procedure and acted callously.

"You will learn that on 25 May 2020, Mr Derek Chauvin betrayed his badge when he used excessive and unreasonable force upon the body of Mr George Floyd," Blackwell told the jury.

"That he put his knees upon his neck and his back, grinding and crushing him, until the very breath, no ladies and gentlemen, until the very life was squeezed out of him," Blackwell said in his opening argument.

The bystander video of Floyd's death sparked protests for racial justice and against police brutality across the United States and around the world.

Chauvin's trial has become a flashpoint for the Black Lives Matter movement and a test of police accountability.

"The whole world is watching," said Ben Crump, a civil rights lawyer and attorney for the Floyd family ahead of opening statements.

"Today starts a landmark trial that will be a referendum on how far America has come in its quest for equality and justice for all," Crump said.

Crump and members of the Floyd family then took a knee for the amount of time Chauvin was seen on video kneeling on Floyd's neck.

Blackwell made clear he was not trying to put all police on trial, but only Chauvin, who was fired from the Minneapolis police department.

"This case is about Mr Derek Chauvin," he said.

"We are going to ask that you find him guilty of murder in the second-degree, murder in the third-degree and manslaughter," he said.

Floyd's cause of death is expected to be the central issue in the case, and a key piece of evidence is likely to be the bystander-filmed video that went viral.

Crump said Chauvin's defense attorney is "going to try to assassinate the character of George Floyd."

"But this is the trial of Derek Chauvin, Let's look at his record," he said. "The facts are simple. What killed George Floyd was an overdose of excessive force."

Floyd died while Chauvin was arresting him for allegedly passing a counterfeit $20 bill.

Chauvin's attorney, Eric Nelson, told the jury that Floyd was under the influence of drugs at the time of his arrest and was resisting being taken into custody.

"You will learn that Derek Chauvin did exactly what he had been trained to do," Nelson said.

He urged the jury to ignore the politics and social issues surrounding the case.

"There is no political or social cause in this courtroom," he said.

Chauvin's trial is being held in a heavily guarded Minneapolis courtroom. Proceedings are expected to last about a month.

Police officers are rarely convicted in the United States when charges are brought against them.

They range in age from their 20s to their 60s and include a chemist, a social worker, an accountant and a nurse. Two are immigrants to the United States.

One is a grandmother, one is recently married and one is a single mother of two teenage boys.

A conviction on any of the charges will require the jury to return a unanimous verdict.

Nelson asked to have the trial delayed and moved out of Minneapolis because of the March 12 announcement that the city had reached a $27 million "wrongful death" settlement with the Floyd family but Judge Peter Cahill rejected the demands.

They are to be tried separately later in the year.