A Minneapolis judge on Monday warned that he may move the proceedings against four police officers charged in the death of George Floyd to a different venue and issue a gag order in a case that has drawn worldwide attention, local media reported.

During brief hearings for each of the four former Minneapolis police officers, Hennepin County District Court Judge Peter Cahill told their attorneys and prosecutors he is concerned that pretrial publicity may impede chances of a fair trial, local media reported.

"They are more than likely pushing this trial to a different venue if they (public officials) continue to do so," Cahill reportedly told lead prosecutor Matthew Frank. "They need to be aware of that."

Frank replied that the attorneys have no control over public officials, it was reported.

The 4 officers charged for the police killing of #GeorgeFloyd are due in court today. Their lawyers are asking the judge to reduce bail.

Derek Chauvin ($1M bond) and Tou Thao ($750K bond) are still in custody. The 2 others already posted bail, one after a crowdfund. pic.twitter.com/p9Cdn57g1z

One of the former officers, Derek Chauvin, 44, allegedly pinned his knee into Floyd's neck for nearly nine minutes on 25 May when he and the three other former policemen were arresting Floyd in a Minneapolis neighborhood. Floyd was later pronounced dead at a hospital.

The incident, caught on video by bystander, sparked massive protests against racial injustice and calls for police reforms. Floyd was allegedly approached by police for having counterfeit money.

Chauvin, who attended Monday's hearing via a video link, faces a second-degree murder charge. The three other officers, J. Alexander Kueng, Tou Thao and Thomas Lane, appeared in person and have been charged with aiding and abetting in the case. None of the four officers entered a plea on Monday.

At the next hearing, on 11 September, Cahill could decide whether the four officers will be tried together or separately. The first trial date was set for 8 March 2021.

Cahill is also considering whether cameras will be allowed in the courtroom.

Bail for Chauvin was earlier set at $1.25 million or $1 million under certain conditions, while for the other three it was set at $750 000-$1 million each.

Related Links
'I'll kill you like George Floyd' - doctor says Tshwane metro cop assaulted, throttled him
OPINION | When will Black lives really begin to matter in the USA?
Floyd's brother tells UN 'black lives do not matter' in US
Share
Next on News24
US formally starts its withdrawal from WHO 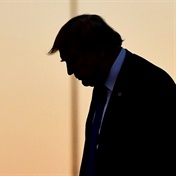 One person bags R343k in the Daily Lotto jackpot
Full list of lottery results
Lockdown For
DAYS
HRS
MINS
Voting Booth
Have you gone out to eat a restaurant since restrictions have lifted?
Please select an option Oops! Something went wrong, please try again later.
Yes I have
13% - 509 votes
No, but I plan to
16% - 631 votes
No, and I don't plan to
70% - 2707 votes
Previous Results
Podcasts
PODCAST | THE STORY: Will removing statues representing oppression remedy ills of the past?