Protesters in at least 12 United States cities defied curfews on Saturday night as outrage over police brutality and the death of George Floyd, an unarmed Black man, escalated.

Hundreds of protesters were still out in Minneapolis, Minnesota, where Floyd died in police custody on Monday, amid heavy police and US National Guard presence as an 8pm curfew began on Saturday.

"We don't need a curfew, we need change," said Mia, a 20-year resident of Minneapolis.

Going home would "(send) the wrong message that they can shut us up when they want to, and that's not the case here", Mia, who requested her surname be withheld, told Al Jazeera.

Protesters have promised to remain in the streets at least until all four officers involved in Floyd's death have been charged.

So far, only one officer - Derek Chauvin - has been arrested in connection to Floyd's death.

Chauvin, who is white, knelt on Floyd's neck for nearly nine minutes, even as Floyd pleaded "I can't breathe" and bystanders urged him to get off. People hold up their fists after protesting near the spot where George Floyd died while in custody of the Minneapolis Police in Minneapolis, Minnesota. (Kerem Yucel, AFP)

On Friday, he was charged with third-degree murder and manslaughter. The three other officers involved - identified as Thomas Lane, Tou Thao and J Alexander Kueng - have not been charged, angering protesters who say they all must be held accountable.

Saturday night's protest started peacefully with protesters chanting "I can't breathe", and "no justice, no peace" as they marched down the city's streets.

Meme Green was handing out water, chips, apples and other snacks to protesters with her young son.

He is a Black boy who is going to be a Black man. He needs to see the protest in a positive way.
Green

But as the curfew began, smoke started appearing on the horizon, with some confrontations between police and protesters.

For the first time in state history, Minnesota Governor Tim Walz fully mobilised the National Guard earlier on Saturday in an effort to quell protests which had rocked the city since Tuesday.

The National Guard said more than 4 100 citizen-soldiers and airmen had been deployed to the Twin Cities area, which includes Minneapolis. Protesters clash with police during a rally against the death of Minneapolis, Minnesota man George Floyd in Union Square in New York City. (Stephanie Keith/Getty Images)

"We are fully-integrated and unified with law enforcement, fire, Emergency Management Systems, and all state agencies to ensure the safety of our citizens," Major General Jon Jensen said at a news conference late on Saturday.

In addition to the National Guard, there was an increased law enforcement presence. Police used tear gas to disperse the crowds, and several arrests were made.

"It's absolutely critical that we come together to try to make sure that our babies can grow up in a world where they can walk outside or simply breathe without having to worry about dying," said Minneapolis resident Ashley Paulson. Protests continue to escalate in the wake of the murder of George Floyd as stores get looted. (Josh Edelson / AFP)

Similar scenes were seen nationwide and officials called in the National Guard and implemented curfews in an effort to quell protesters.

In New York City, several groups of protesters rallied throughout the city. While the protests remained mostly peaceful throughout the day, as the sun set, there were periodic scenes of violence. Police used tear gas and videos showed some protesters being thrown to the ground by officers.

WATCH | George Floyd killing: Protests and riots across US

Elsewhere, police vehicles and some buildings were set on fire following largely peaceful, but angry protests.

Reminiscent of other police killings

Demonstrators are angry not just over Floyd's death, but years of police killings and violence against unarmed African Americans. That especially rings true in Minnesota.

The next year, 32-year-old Philando Castile was killed by police during a traffic stop in a suburb of Saint Paul, which neighbours Minneapolis. Castile's girlfriend streamed the aftermath of the shooting live on Facebook. The officer involved was acquitted of manslaughter. 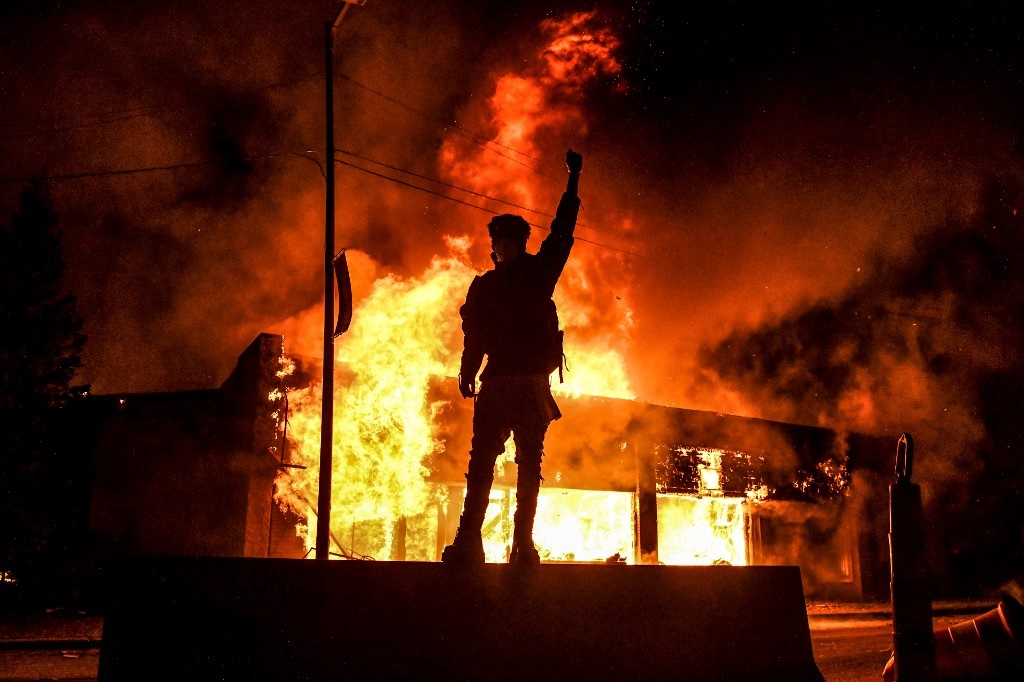 A protester reacts standing in front of a burning building set on fire during a demonstration in Minneapolis, Minnesota. (Chandan Khanna, AFP)

In 2015, protesters rallied for more than two weeks following the police killing of 24-year-old Jamar Clark in Minneapolis. No charges were filed against the officers involved.

Paulson said she has had to have some hard discussions with her five-year-old daughter.

We live in a world where facts and fiction get blurred
In times of uncertainty you need journalism you can trust. For only R75 per month, you have access to a world of in-depth analyses, investigative journalism, top opinions and a range of features. Journalism strengthens democracy. Invest in the future today.
Subscribe to News24
Related Links
George Floyd: Violence divides protesters, as 'chaos' grips Minneapolis
George Floyd killing: Police out in numbers as protests flare up across US
Officer Derek Chauvin charged with murder of George Floyd as unrest sweeps US
Next on News24
Haiti gang leader threatens to kill American hostages

Lucky Sunday for 3 Daily Lotto players
Full list of lottery results
Lockdown For
DAYS
HRS
MINS
Voting Booth
Children between 12 and 17 can now be vaccinated against Covid-19. As a parent I am:
Please select an option Oops! Something went wrong, please try again later.
Relieved, it's been a long wait to this point
50% - 2117 votes
A bit hesitant, and will wait to see how it goes
22% - 924 votes
Completely against my child getting the shot
28% - 1189 votes
Previous Results
Podcasts
PODCAST | My Only Story: Fiddling, sex jokes and flirting – another water polo coach exposed