Thousands gather at the Martyrs' Square to protest the political figures and officials they blame for the deadly explosion at the Port of Beirut.
Mahmut Geldi/Anadolu Agency via Getty Images

A group of protesters led by retired Lebanese army officers stormed the foreign ministry in Beirut Saturday and declared it the headquarters of the revolution.

The takeover, which was aired live on local TV, happened as most of the security forces' attention was focused on a tense demonstration against the ruling elite a few hundred metres down the road.

"We are taking over the foreign ministry as a seat of the revolution," said Sami Rammah, a retired officer who spoke through a loudspeaker from the ministry building's front steps.

"We call on all the anguished Lebanese people to take to the streets to demand the prosecution of all the corrupt," he said.

An explosion at Beirut port Tuesday that is widely blamed on the incompetence and corruption of the ruling elite killed at least 158 people, wounded 6 000 and made hundreds of thousands homeless.

Rammah, who stressed the protest camp was "not against one specific person but against a system that destroyed the country", urged the international community to boycott the government.

"We call all our Arab allies and other allied nations and the Arab League and the United Nations to consider our revolution as the real representative of the Lebanese people," he said.

His call came amid intense diplomatic activity in solidarity with disaster-struck Lebanon and on the eve of an international donor conference.

Four days since the blast, grief gave way to rage, with a large demonstration Saturday that was reminiscent of the unprecedented nationwide and cross-sectarian protest movement that erupted in October. 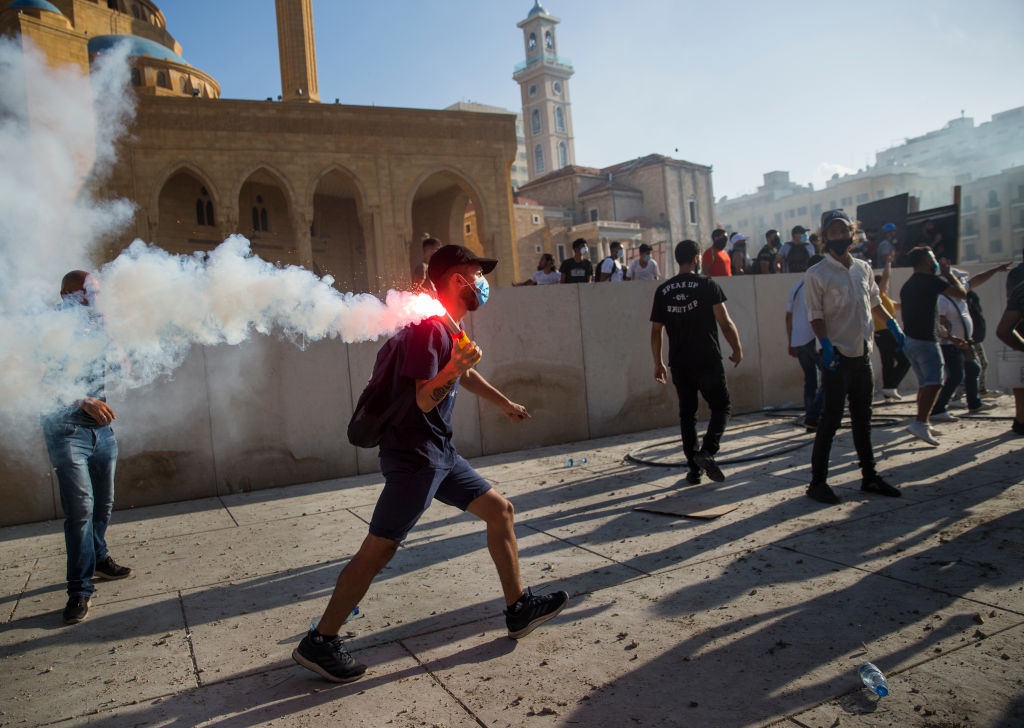 A protester runs with a flare that he will throw at Lebanese Army soldiers while protesting against the government.
Getty Images Daniel Carde/Getty Images

Around 200 people occupied the foreign ministry compound, which lies on an upmarket street in central Beirut.

Their entry into the ministry appeared to have been facilitated by the damage the historical building sustained in Tuesday's monster explosion.

Some of the protesters pulled the portrait of President Michel Aoun off the wall and smashed it on the ground, an AFP correspondent there said.

We live in a world where facts and fiction get blurred
In times of uncertainty you need journalism you can trust. For only R75 per month, you have access to a world of in-depth analyses, investigative journalism, top opinions and a range of features. Journalism strengthens democracy. Invest in the future today.
Subscribe to News24
Related Links
Beirut blast: Death toll rises to 158 as police clash with disgruntled citizens
More than 60 still missing after Beirut mega-blast: ministry
Beirut blast: Lebanon's leaders face rage, calls for reform after tragic explosion claims 149 lives
Next on News24
Moscow launches online registration for Covid-19 vaccination