Lebanon's prime minister announced his government's resignation on Monday, saying a huge explosion that devastated the capital and stirred public outrage was the result of endemic corruption.

The August 4 detonation at a port warehouse of more than 2 000 tonnes of ammonium nitrate killed at least 163 people, injured more than 6 000 and destroyed swathes of the Mediterranean capital, compounding months of political and economic meltdown.

In a televised address, Prime Minister Hassan Diab said he backed calls by ordinary Lebanese for those responsible for "this crime" to be put on trial.

Diab made the announcement after the cabinet, formed in January with the backing of the powerful Iranian-backed Hezbollah group and its allies, met on Monday, with many ministers wanting to resign, according to ministerial and political sources.

Diab said on Saturday he would request early parliamentary elections.

Demonstrations broke out again in central Beirut, with some protesters hurling rocks at security forces guarding an entrance leading to the parliament building, who responded with tear gas.

"The entire regime needs to change. It will make no difference if there is a new government," Joe Haddad, a Beirut engineer, told Reuters. "We need quick elections."

For many ordinary Lebanese, the explosion was the last straw in a protracted crisis over the collapse of the economy, corruption, waste and dysfunctional governance, and they have taken to the streets demanding root-and-branch change.

The information and environment ministers quit on Sunday as well as several lawmakers, and the justice minister followed them out the door on Monday. Finance Minister Ghazi Wazni, a key negotiator with the IMF over a rescue plan to help Lebanon exit a financial crisis, was set to resign, a source close to him said.

Lebanon's president had previously said explosive material was stored unsafely for years at the port. He later said the investigation would consider whether the cause was external interference as well as negligence or an accident. 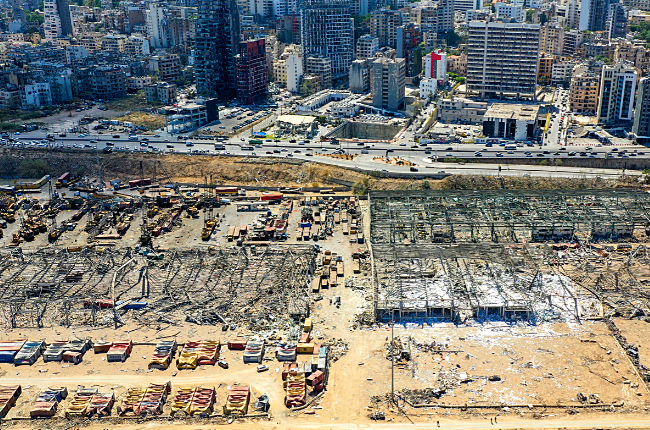 An aerial view taken on 9 August 2020, shows a general view of the port of Beirut, the damaged grain silo and the crater caused by the colossal explosion.
AFP The damaged grain silo and the crater caused by the colossal explosion of a huge pile of ammonium nitrate that had languished for years in a port warehouse, leaving scores of people dead or injured and causing devastation in the Lebanese capital.
AFP

The Lebanese army said on Monday that another five bodies were pulled from the rubble, raising the death toll to 163. Search and rescue operations continued.

The cabinet decided to refer the investigation of the blast to the judicial council, the highest legal authority whose rulings cannot be appealed, a ministerial source and state news agency NNA said. The council usually handles top security cases.

Anti-government protests in the past two days have been the biggest since October, when angry demonstrations spread over an economic crisis rooted in pervasive graft, mismanagement and high-level unaccountability. An international donor conference on Sunday raised pledges worth nearly $298 million for immediate humanitarian relief, but foreign countries are demanding transparency over how the aid is used.

Some Lebanese doubt change is possible in a country where sectarian politicians have dominated since the 1975-90 conflict.

"It won't work, it's just the same people. It's a mafia," said Antoinette Baaklini, an employee of an electricity company that was demolished in the blast.

What do you think of the Lebanese government's decision to resign in the wake of the Beirut blast due to 'endemic corruption' given allegations of PPE tender corruption against the South African government? Give us your thoughts in the comments below.
Related Links
Trump calls for Lebanon to hold 'transparent investigation' into blast
Furious Lebanese plan new protests over Beirut blast
Beirut blast: Electric night of Lebanon protests after devastating explosion claims 158 lives
Share
Next on News24
Biden blasts Trump plan to push for Supreme Court nominee ahead of election