Letter on US pullout from Iraq a 'mistake' 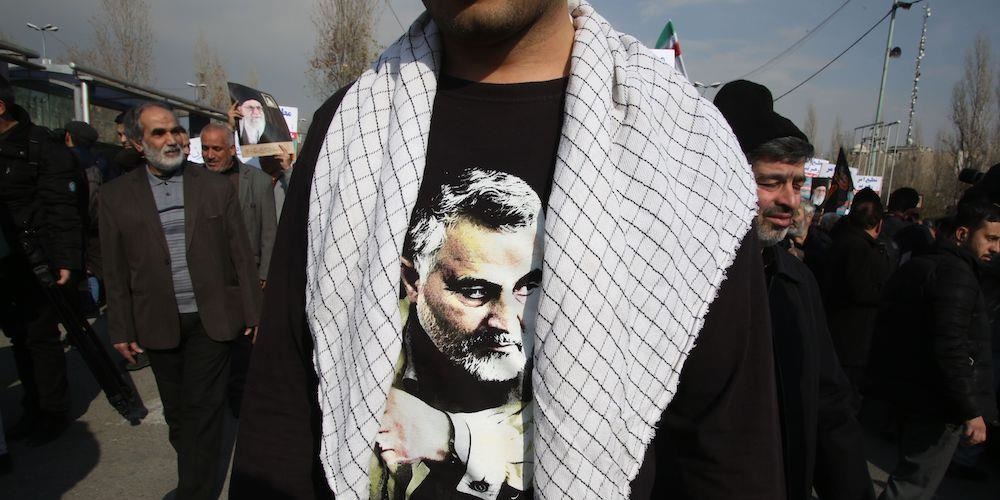 An Iranian protester wears a T-shirt with a picture of slain commander Qasem Soleimani in Tehran.
Atta Kenare/Getty

America's military strategy in Iraq was thrown into confusion Monday as the Pentagon admitted a letter from a general informing the Iraqi government of an imminent US troop pullout was sent by "mistake."

The latest developments came as a sea of black-clad mourners in Tehran paid homage to Qasem Soleimani, the head of the Iranian Revolutionary Guards' Quds Force who was killed in a US strike in Iraq on Friday.

US Brigadier General William Seely informed his Iraqi counterparts in a letter dated Sunday that American troops were preparing to leave Iraq.

"We respect your sovereign decision to order our departure," said the letter, whose authenticity was confirmed to AFP by both Iraqi and US defence officials.

Seely said the US-led coalition would "be repositioning forces."

"In order to conduct this task, Coalition Forces are required to take certain measures to ensure that the movement out of Iraq is conducted in a safe and efficient manner," said the letter.

READ | 'Down with USA': crowds in Iran mourn general killed by America

It said helicopters would be travelling in and around Baghdad's Green Zone where the US embassy is located as part of the preparations.

AFP could hear helicopters flying low over Baghdad throughout the night on Monday.

But Pentagon Joint Chiefs Chairman Mark Milley said on Monday the letter was a mere "draft" and "should not have been sent."

"It was a mistake, an honest mistake, a draft unsigned letter, because we are moving forces around," Milley told reporters in Washington.

US Defence Secretary Mark Esper said the letter was "inconsistent" with Washington's position and denied there had been a decision to leave Iraq.

The US drone strike that killed Soleimani, as well as Iraqi military commanders, has sparked fury in both Iran and Iraq, with Tehran vowing revenge.

Iraqi lawmakers on Sunday urged the government to oust all foreign troops from Iraqi soil.

Some 5 200 US soldiers are stationed across Iraqi bases to support local troops preventing a resurgence of the Islamic State group.

They make up the bulk of a broader coalition, invited by the Iraqi government in 2014 to help combat the jihadists.

The targeted killing of the 62-year-old Soleimani saw Iran step back even further from the already tattered 2015 nuclear accord with world powers.

In an escalating war of words that has heightened international concern and rattled financial markets, Trump threatened yet more "major retaliation" if Tehran hits back, including strikes on Iranian cultural sites.

Writing in all-caps on Monday, Trump tweeted: "IRAN WILL NEVER HAVE A NUCLEAR WEAPON!"

IRAN WILL NEVER HAVE A NUCLEAR WEAPON!

Iraq requested in a letter to the UN - seen by AFP - that the Security Council condemn the US drone strike, so that "the law of the jungle" was not allowed to prevail.

The operation represented "a dangerous escalation that could lead to a devastating war in Iraq, the region and the world," wrote the Iraqi ambassador to the UN, Mohammed Hussein Bahr-Aluloom.

The agreement had offered Tehran sanctions relief in return for curbs to prevent it acquiring nuclear weapons - but Trump's withdrawal in 2018 dramatically weakened the deal.

We live in a world where facts and fiction get blurred
In times of uncertainty you need journalism you can trust. For only R75 per month, you have access to a world of in-depth analyses, investigative journalism, top opinions and a range of features. Journalism strengthens democracy. Invest in the future today.
Subscribe to News24
Related Links
Pakistan insists it won't be dragged into US, Iran conflict, urges both sides to ratchet down...
Unravelling of the Iran nuclear deal: a timeline
Trump warns Iran of 'major retaliation,' threatens sanctions on Iraq
Next on News24
Race against the clock to build Trump's border wall