Mob storms US Capitol as Trump accused of 'coup'

Donald Trump's supporters stormed a session of Congress held Wednesday to certify Joe Biden's election win, triggering unprecedented chaos and violence at the heart of American democracy and accusations the president was attempting a coup.

Vowing not to be deterred, lawmakers resumed business after dark and the Senate soundly rejected the first of several expected challenges to Biden's win, with several Trump loyalists reversing course in the wake of the violence that drew condemnation around the world.

Egged on in an extraordinary rally across town by an aggrieved Trump, a flag-waving mob broke down barricades outside the Capitol and swarmed inside, rampaging through offices and onto the usually solemn legislative floors.

Security forces fired tear gas in a four-hour operation to clear the Capitol and police said at least one person was shot and killed, reportedly a female Trump partisan from California.

One Trump backer in jeans and a baseball cap was pictured propping a leg up on House Speaker Nancy Pelosi's desk, where a threatening note had been left, as throngs of others climbed onto risers set up for Biden's inauguration on January 20, holding a banner that read: "We the people will bring DC to its knees/We have the power."

Biden called the violence an "insurrection" and demanded that Trump immediately go on national television to tell the rioters to leave.

"Our democracy's under unprecedented assault," Biden said in his home state of Delaware.

"This is not dissent. It's disorder. It's chaos. It borders on sedition. And it must end now."

Trump soon afterward released a video in which he called on the mob to leave but stood by his unfounded claims of election fraud.

Sonya Fitzgerald, a 43-year-old Trump supporter from Florida, said on the Capitol steps: "You'll hear about this in the history books."

In a major step, social media companies pulled down Trump's video on charges it aggravated violence and Twitter temporarily suspended his account, warning the tweet-loving tycoon of a permanent ban if he does not conform to rules on civic integrity.

The chaos at the Capitol came a day after Biden enjoyed a new triumph, with his Democrats projected to win two Senate runoff seats in Georgia - handing the party full control of Congress and dramatically increasing Biden's ability to pass legislation, starting with new Covid-19 relief.

Historians said it was the first time that the Capitol had been taken over since 1814 when the British burned it during the War of 1812.

For more than two centuries, the joint session of Congress has been a quiet, ceremonial event that formally certifies the election winner - but Trump urged members of his Republican Party to reject the outcome. 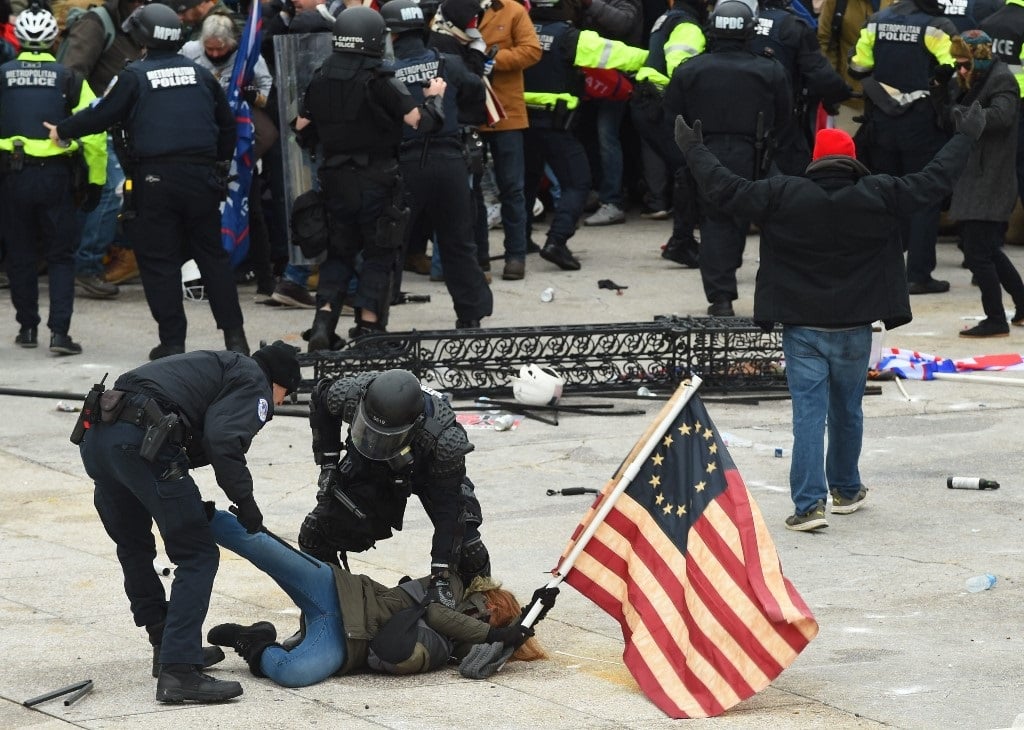 Police detain a person as supporters of US President Donald Trump protest outside the US Capitol on in Washington, DC.
AFP ROBERTO SCHMIDT / AFP

The Senate rejected the first challenge, to Biden's win in Arizona, with only six Republicans still objecting and an equal number having a change of heart.

"The events that have transpired today have forced me to reconsider. And I cannot now in good conscience object to the certification," said Senator Kelly Loeffler, one of two Georgia Republicans projected to have lost their seats Tuesday.

Republican Senate leader Mitch McConnell, closely aligned with Trump throughout his presidency, had tried to prevent the challenges and noted that the election results were not even close.

"The voters, the courts and the states have all spoken. If we overrule them, it will damage our republic forever," McConnell said shortly before the violence.

"If this election were overturned by mere allegations from the losing side, our democracy would enter a death spiral," he added.

But Senator Josh Hawley, who has taken the lead on the effort and is seen as a future Republican presidential aspirant, insisted on going ahead even after the mob attack.

"Violence is not how you achieve change," the 41-year-old senator said, insisting that he wanted to offer a "lawful process" to Trump supporters to assess their unfounded claims of fraud.

Senator Mitt Romney, one of Trump's most vocal critics inside the Republican Party, pointedly said that the best way to respect voters "is to tell them the truth."

"Those who continue to support this dangerous gambit," Romney said, "will forever be seen as being complicit in an unprecedented attack against our democracy."

With Democrats already in control of the House of Representatives, there was never any chance that Congress would overturn Biden's victory.

Democratic Senator Chuck Schumer, who is set to become majority leader after Tuesday's election victories, described the violence as an attempted coup and said it would be remembered in US history much like the Japanese attack on Pearl Harbor.

"This mob was in good part President Trump's doing, incited by his words, his lies," Schumer said, adding that Trump would bear "everlasting shame."

Former president Barack Obama called the violence "a moment of great dishonor and shame for our nation."

"But we'd be kidding ourselves if we treated it as a total surprise," Obama said, adding that it was "incited" by Trump, "who has continued to baselessly lie about the outcome of a lawful election."

Former president George W. Bush also did not mince words, denouncing lawmakers' "reckless behavior" and saying: "This is how election results are disputed in a banana republic - not our democratic republic."

Trump has only two weeks left in office but, with little on his public schedule for weeks and multiple reports he is losing his grip on reality, lawmakers renewed talk that his cabinet should remove him as unfit for office under the 25th Amendment to the Constitution.

"President Trump's willingness to incite violence and social unrest to overturn the election results by force clearly meet this standard," all Democrats on the House Judiciary Committee wrote in a letter to Vice President Mike Pence.

In an angry, rambling speech outside the White House before the violence, Trump urged his supporters to march to the Capitol and demanded that Pence, who ceremonially led the session, intervene to reverse their loss.

But Pence -- dutifully loyal to Trump for four years and quiet since the election -- said in a last-minute statement that he did not believe he had authority to intervene.

Thousands of Trump supporters headed to Washington at his urging in recent days, with downtown businesses boarding up in fear of violence and Mayor Muriel Bowser ordering a curfew Wednesday night.

"I can't say I respect our election process anymore," said Gail Shaw, 76, who drove down from New Jersey. "We will take our nation back."

Biden won in excess of seven million votes more than Trump in the November 3 election and leads him 306-232 in the state-by-state Electoral College count that determines elections, with Republicans unable to prove in court a single allegation of fraud.