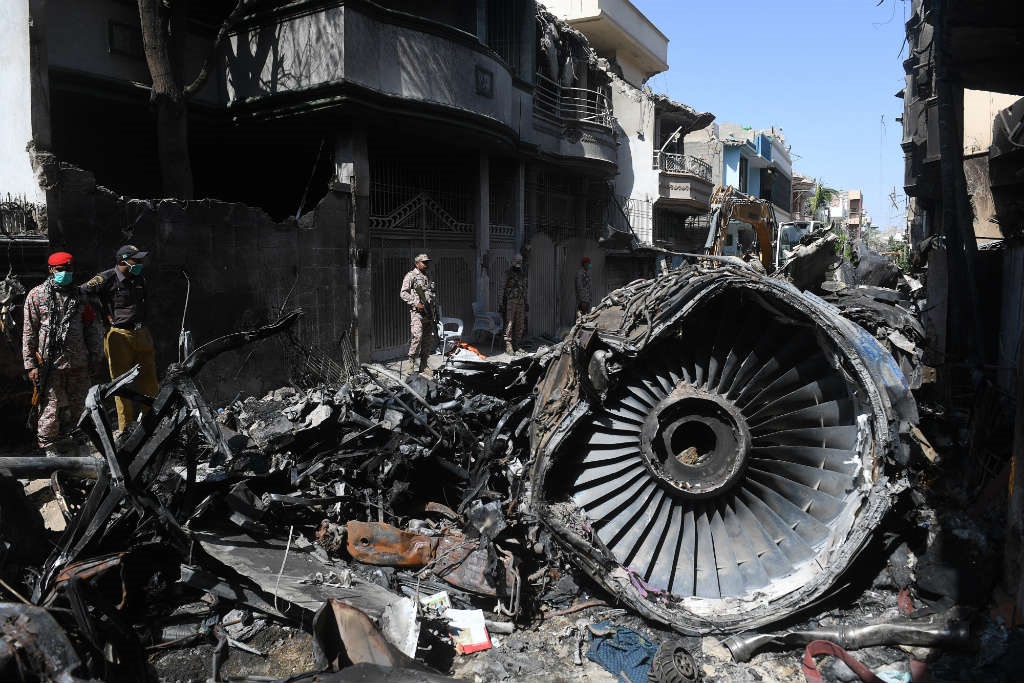 In this file photo taken on May 24, 2020, security personnel stand beside the wreckage of a plane at the site after a Pakistan International Airlines aircraft crashed in a residential area days before, in Karachi.
Asif Hassan/AFP

Islamabad – A plane crash which killed 97 people in Pakistan last month was because of human error by the pilots, who were discussing the coronavirus during the landing, according to an initial report released on Wednesday.

The Pakistan International Airlines (PIA) plane came down among houses on 22 May after both engines failed as it approached Karachi airport, killing all but two people on board.

"The pilot as well as the controller didn't follow the standard rules," the country's aviation minister Ghulam Sarwar Khan said, announcing the findings in parliament.

The minister added the pilots had been discussing the coronavirus pandemic as they attempted to land the Airbus A320 and had disengaged the craft's autopilot.

"Unfortunately, the pilot was overconfident," Khan said, adding that the plane was flying at more than double the altitude it should have been when he approached to land.

Standard flight operating procedures were then ignored by the pilots and the air traffic controller, resulting in an aborted crash landing that heavily damaged the plane's engines.

The aircraft then went down as it attempted a second landing, crashing into a residential area near the Karachi airport.

The Pakistani investigation team, which included officials from the French government and the aviation industry, analysed data and voice recorders.

The minister said the plane was "100% fit for flying, there was no technical fault".

Many passengers were on their way to spend the Muslim holiday of Eid al-Fitr with loved ones.

About 29 houses were badly damaged in the crash, the minister said during the parliamentary address, adding that the government would compensate residents for property losses.

Pakistan has a chequered military and civilian aviation safety record, with frequent plane and helicopter crashes over the years.

In 2016, a Pakistan International Airlines plane burst into flames after one of its two turboprop engines failed while flying from the remote north to Islamabad, killing more than 40 people.

The deadliest air disaster on Pakistani soil was in 2010, when an Airbus A321 operated by private airline Airblue and flying from Karachi crashed into the hills of Islamabad as it came in to land, killing all 152 people on board.

An official report blamed the accident on a confused captain and a hostile cockpit atmosphere.

PIA, one of the world's leading airlines until the 1970s, now suffers from a sinking reputation due to frequent cancellations, delays and financial troubles.

It has been involved in numerous controversies over the years, including the jailing of a drunk pilot in Britain in 2013.

We live in a world where facts and fiction get blurred
In times of uncertainty you need journalism you can trust. For 14 free days, you can have access to a world of in-depth analyses, investigative journalism, top opinions and a range of features. Journalism strengthens democracy. Invest in the future today. Thereafter you will be billed R75 per month. You can cancel anytime and if you cancel within 14 days you won't be billed.
Subscribe to News24
Related Links
'I saw fire everywhere' - Survivor recalls horror of Pakistan plane crash that killed 97
97 dead, two survivors in Pakistan plane crash
WATCH | Pakistan passenger plane with 98 on board crashes on homes, 40 bodies recovered
Next on News24
US charges Iranian in plot to murder former US security adviser John Bolton