Two people died in Italy and eight were missing in France on Saturday after storms, torrential rain and flash floods battered the border area, washing away roads and houses, cutting off whole villages and triggering landslips, as hundreds of rescuers raced to find stranded survivors.

Torrential rain of up to 50 centimetre and high winds crashed into the border area in the latest of a string of strong storms in recent years.

Storm Alex barrelled into France's west coast on Thursday bringing powerful winds and rain across the country before moving into Italy, where regions across the north suffered an onslaught throughout Saturday.

"I lost everything but we are alive," said Jennyfer, 29, from Roquebilliere in France's southern Alps.

"There must be one room left in my house," she said after she returned following evacuation on Friday to survey the damage wrought by the Vesubie river.

A volunteer firefighter died in Italy's Aosta Valley and a man was killed after his car was washed away in the river Sesia, about 100 kilometres (60 miles) further east. Italy had reported a large group of people missing after landslides hit the border area near the Col de Tende mountain pass in France.

But late on Saturday the Italian civil protection agency spokeswoman Mara Anastasi said 21 people had been found and evacuated by helicopter, including two Germans and their grandchildren.

An emergency spokesman in France said that around 40 people stranded on roads by the landslides had sheltered in an old train station and then been airlifted to safety.

Dozens of firefighters were trying to reach one Italian village by train after the road was shut.

In France, the army and hundreds of rescuers were deployed to search for the missing, including using helicopters to transport aid and evacuate people where possible.

AFP journalists who reached one of the worst-hit areas in the Vesubie valley saw roads that had been washed away by the waters leaving buildings teetering above the voids. This aerial view taken on 3 October 2020 shows the damage in southeastern France, after heavy rains and floods hit the region.
Valery Hache / AFP

"We have actually had houses wiped out," said Alpes-Maritimes prefect Bernard Gonzalez

Switzerland was also battered with record rainfall in some areas and powerful gusts, forcing the closure of roads and mountains.

French Prime Minister Jean Castex, who inspected the damage around the city of Nice by helicopter, said there were eight people officially designated missing.

But a great many more could not be contacted, he added.

"I do not hide from you our deep concern about the final outcome of this episode," he said, adding that the government had triggered its emergency plan for handling natural disasters.

"The situation is catastrophic in some communes," regional lawmaker Eric Ciotti told AFP.

Authorities in the Alpes-Maritimes region had been placed on alert Friday and around 12 000 people in three valleys to the north of Nice were without power early Saturday afternoon.

"We are thunderstruck," said Serge Franco, a resident of Roquebilliere, some 50 kilometres north of Nice, as rescue helicopters hovered overhead.

"We saw the (river) Vesubie burst its banks - everything was swept away, including part of the old iron bridge," he told AFP. 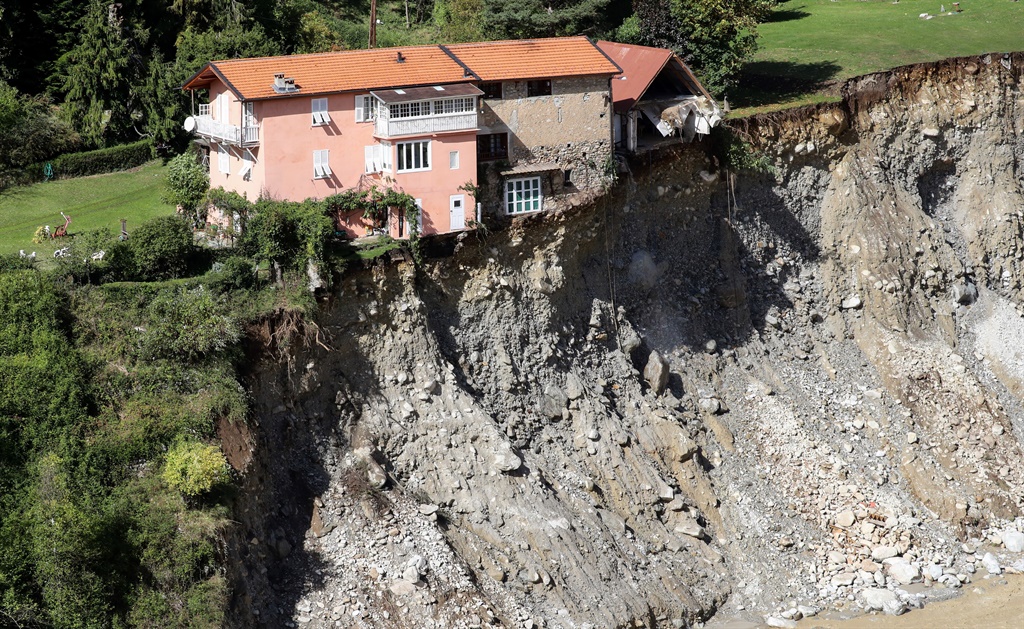 The extreme damage in a village of southeastern France, where heavy rains and flood hit the area, leaving many people missing.
Valery Hache / AFP

"My house is habitable but half of my land has been swept away," said another resident, Guillaume Andre. Evacuated overnight, he had returned to see the devastation after daybreak.

In Roquebilliere, the floodwaters swept away two elderly people with their house.

"The firefighters did not have enough rope, and even with our rope we could not reach the house, so it was too late to get to them and the house was suddenly swept away," resident Patrick Theus told AFP.

The head of Italy's Piedmont region said the storm was the most serious in those parts since a flood killed 70 people in 1994.

The mayor of the northern Italian city of Ventimiglia, Gaetano Scullino, meanwhile said "a disaster of this kind has not happened since 1958".

We live in a world where facts and fiction get blurred
In times of uncertainty you need journalism you can trust. For only R75 per month, you have access to a world of in-depth analyses, investigative journalism, top opinions and a range of features. Journalism strengthens democracy. Invest in the future today.
Subscribe to News24
Related Links
'Extremely dangerous' Hurricane Laura makes landfall in US, prompting 'unsurvivable' surge fears
4 people dead, millions without electricity as Tropical Storm Isaias pounds US east coast
Indonesia on edge as more downpours expected, flood toll hits 66
Next on News24
DEVELOPING | US inauguration: America enters final hours of Donald Trump presidency

Here are the winning Lotto and Lotto Plus numbers
Full list of lottery results
Lockdown For
DAYS
HRS
MINS
Voting Booth
Will you continue to use WhatsApp following the company announcing a change terms of service which would force users to share personal data?
Please select an option Oops! Something went wrong, please try again later.
Yes, the terms of service do not bother me enough to switch
53% - 8252 votes
No, I will be switching over to a new service
43% - 6811 votes
I've never used WhatsApp
4% - 620 votes
Previous Results
Podcasts
PODCAST | MISSING MATTHEW EPISODE 3: Decades of false starts add to a family's despair