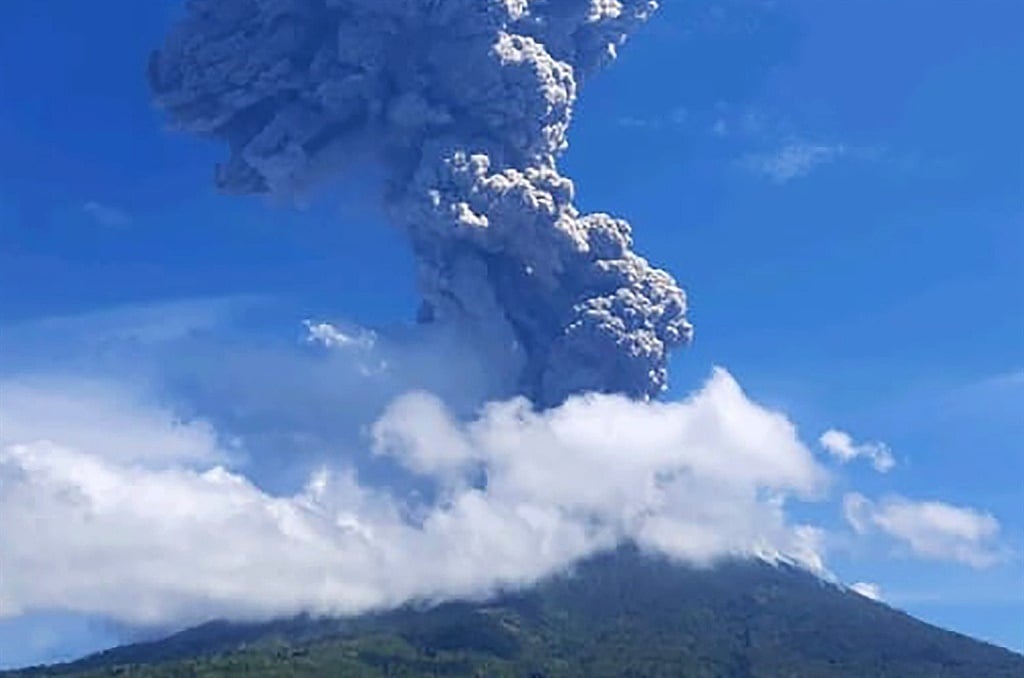 Indonesia's Mount Ili Lewotolok erupted on Sunday, belching a column of smoke and ash four kilometres into the sky, triggering a flight warning and the closure of the local airport.

There were no reports of injuries or damage from the eruption in a remote part of the Southeast Asian archipelago.

But authorities raised the volcano's alert status to its second-highest level as they warned of possible lava flows. Shot taken on 27 November 2020 after the Indonesia Geological agency raised the status alert for Merapi to the second highest ahead of a possible eruption.
Agung Supriyanto / AFP After the Indonesia Geological agency raised the status of alert for Merapi to the second highest ahead of a possible eruption, this photo was taken.
Agung Supriyanto / AFP

A two-kilometre no-go zone around the crater was also expanded to four kilometres, while flights were advised to steer clear of the area as volcanic ash rained down on East Nusa Tenggara's Wunopitu airport, which was temporarily closed.

"People are advised to not carry out any activities within a four-kilometre radius from the crater," Indonesia's geological agency said. Indonesia is home to about 130 active volcanoes due to its position on the "Ring of Fire", a belt of tectonic plate boundaries circling the Pacific Ocean where frequent seismic activity occurs.

In late 2018, a volcano in the strait between Java and Sumatra islands erupted, causing an underwater landslide that unleashed a tsunami which killed more than 400 people.

We live in a world where facts and fiction get blurred
In times of uncertainty you need journalism you can trust. For only R75 per month, you have access to a world of in-depth analyses, investigative journalism, top opinions and a range of features. Journalism strengthens democracy. Invest in the future today.
Subscribe to News24
Related Links
Evacuation crackdown ordered as Philippine volcano 'recharges'
Filipinos turn volcano's ash, plastic trash into bricks
PICS: Tens of thousands face uncertainty as Philippine volcano spews lava
Next on News24
Trump threatened to oust US officials if they did not overturn election results, documents show

Lekker Friday for two Daily Lotto winners!
Full list of lottery results
Lockdown For
DAYS
HRS
MINS
Voting Booth
Should Covid-19 vaccinations be mandatory for employees in workplaces?
Please select an option Oops! Something went wrong, please try again later.
Yes, it is the responsible thing to do
46% - 3682 votes
No, vaccination should be an individual choice
43% - 3482 votes
No, but those who are unvaccinated should have to work from home
11% - 855 votes
Previous Results
Podcasts
PODCAST | The Story: Why did SA's security agencies fail to avert the looting chaos?