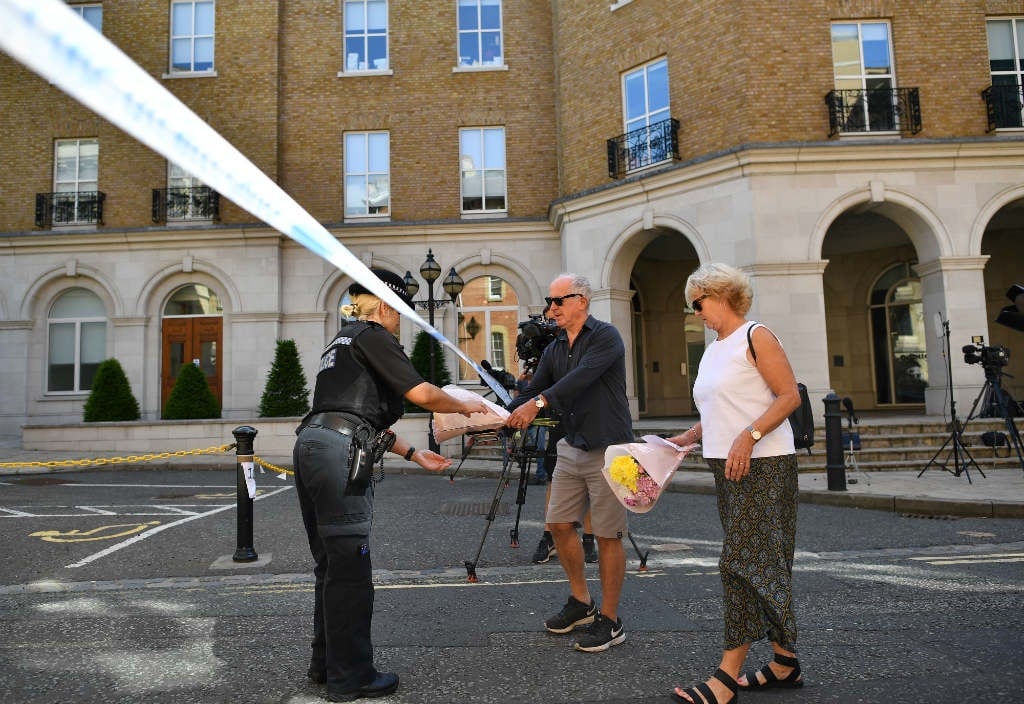 Members of the public pass flowers to a police officer to lay near an entrance of Forbury Gardens park in Reading, west of London, on June 22, 2020, the scene of the June 20 stabbing spree.
Ben Stansall/AFP

Britain's interior minister on Monday vowed tougher action against extremism after three people, including a US citizen, were stabbed to death in a park, the third terror-related knife attack in a year.

A 25-year-old man, widely identified as Libyan refugee Khairi Saadallah, was arrested near the scene of Saturday's attack in Reading, west of London, and was being held under counter-terrorism laws.

The incident has raised concerns about the early release of offenders from prison, after reports he had recently been freed from jail for non-terror offences.

It has also triggered questions because he was said to have been known to the security services.

Thames Valley Police said one of the victims was a local teacher, James Furlong. Another was his friend Joe Ritchie-Bennett, originally from Philadelphia, reports said.

US Ambassador to Britain Woody Johnson offered condolences to everyone affected. "To our great sorrow, this includes an American citizen," he wrote on Twitter.

In November last year, a convicted jihadist on parole was shot dead by police after stabbing five people - two fatally - near London Bridge in central London.

Armed officers then shot dead another assailant who stabbed and injured three people in the Streatham area of south London, in February.

The Streatham attacker had also been released early from a terrorism conviction and been under "active surveillance".

Both incidents prompted the government to move to tighten legislation on the early release of the most serious offenders, including those convicted of terrorism.

In a statement to parliament, interior minister Priti Patel hailed the unarmed police officer who tackled the suspect to arrest him, and another who gave emergency first aid to victims, as "heroes".

"They are the very best of us," she told lawmakers.

But she said the security services faced an increasingly tough job in tackling the "complex, diverse and rapidly changing" threat of "poisonous extremist ideology", including from "lone actors".

"Swift justice will be done. Victims will be supported. And if further action is needed to stop terrorists in their tracks, this government will not hesitate to act," she added.

Witnesses to the attack in Forbury Gardens, central Reading, described seeing a lone assailant walking through the park shortly after 19:00 on Saturday, and stabbing them at random.

The attacker looked as if he had put his hands "in a big bucket of red paint", one said.

British media said Saadallah briefly came to the attention of the domestic intelligence agency MI5 last year and was said to have planned to travel abroad, reportedly to Syria.

But he was not deemed to be a substantial risk. His mental health is understood to be a factor for investigating officers.

Patel said she could not give more details because of the police investigation but said that since 2017, 25 terror plots, including eight from right-wing extremists, had been foiled.

"On any given day, they (the security services) make a series of calculated judgments and decision on how best to protect our citizens and country, based upon the intelligence that they gather," she added.

Mark Rowley, a former assistant commissioner for specialist operations in London's Metropolitan Police, said Saadallah would have been one of thousands of people on MI5's watch list.

Some 3 000 people are under investigation at any one time but there are up to 40 000 people who have come up on the radar in relation to extremist ideology, he told BBC radio.

"To spot one of those who is going to go from a casual interest into a determined attacker... is the most wicked problem that the services face," he added.

"People must remain vigilant," he told the BBC.

We live in a world where facts and fiction get blurred
In times of uncertainty you need journalism you can trust. For only R75 per month, you have access to a world of in-depth analyses, investigative journalism, top opinions and a range of features. Journalism strengthens democracy. Invest in the future today.
Subscribe to News24
Related Links
UK knife attack: Reading terror suspect was known to security services - reports
UK to overhaul terror sentences after London knife attack
Woman held after UK knife attack sparks terror fears
Next on News24
Covid-19: UK open to talks over vaccine waivers with US and others