People across Earth's northern hemisphere viewed an annular solar eclipse on Thursday with parts of Canada and Siberia privy to the best view of the celestial event.

The eclipse was partly visible to observers in North America, parts of Europe including France and the UK, and some of northern Asia.

In London, where the moon covered 20 percent of the sun as the eclipse reached totality, sky-gazers glimpsed the event through cloud cover.

Observers on the east coast of the United States were treated to a rare eclipsed sunrise. In this handout image provided by NASA, a partial solar eclipse is seen as the sun rises behind the Capitol Building on June 10, 2021 in Arlington, Virginia. (Photo by Bill Ingalls/NASA via Getty Images)
Getty Images The sun rises next to the Statue of Liberty during an annular eclipse on June 10, 2021 in New York City. (Photo by Gary Hershorn/Getty Images)
Getty Images

In northern Canada, northern Russia, northwest Greenland and the North Pole, the sun was 88 percent obscured by the moon.

Many live stream views from various locations broadcast on YouTube were also subject to cloud cover.

However, those with maximum visibility - and the necessary protective eyewear - would have seen the moon's silhouette ringed by the sun for a few minutes of the two-hour event.

Ahead of the eclipse, experts warned people not to try and look at the sun directly, even through the clouds. A partial solar eclipse is seen behind the Crimea and Indian Mutiny memorial outside Westminster Abbey on June 10, 2021 in London, England. (Photo by Chris J Ratcliffe/Getty Images)
Getty Images "Retinal burns can be irreversible," reminded the Paris Observatory's Florent Delefie before the event.

Some observers used pieces of cardboard perforated with a hole to watch the eclipse as a shadow projected onto paper, posting images on social media.

The eclipse was the first annular - meaning "ring-like" - eclipse of 2021 and the 16th this century. 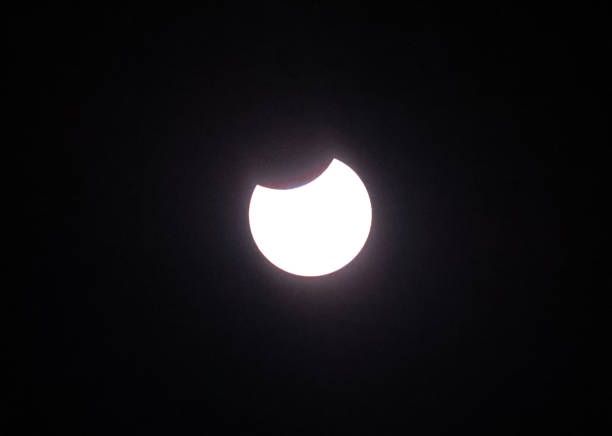 North Rhine-Westphalia, Bielefeld: A small part of the sun is covered by the moon during a partial solar eclipse. Photo: Friso Gentsch/dpa (Photo by Friso Gentsch/picture alliance via Getty Images)
Getty Images A partial solar eclipse is seen over the Houses of Parliament on June 10, 2021 in London, England. (Photo by Dan Kitwood/Getty Images)
Getty Images

Annular eclipses occur when the diameter of the moon visible from earth is less than that of the sun, leaving a "ring of fire" visible around its silhouette.

A total solar eclipse occurs when the moon completely blocks the sun's disk, momentarily plunging a portion of the Earth into complete darkness.

The next total solar eclipse will occur on 4 December, but will only be visible from Antarctica.