"Our goal is to attempt to add context, and now we have capabilities to do that," he tweeted.

The company sparked an outcry for briefly restricting US President Donald Trump's re-election campaign's Twitter account after it posted a video that referred to the New York Post story on Thursday.

US Senate Judiciary Committee Chairman Lindsey Graham and Republican senators Ted Cruz and Josh Hawley said on Thursday the committee would vote on Tuesday on sending a subpoena to Dorsey.

The Hacked Material Policy was introduced in 2018 to discourage the spread of private information following hacks and unauthorized exposures.

We live in a world where facts and fiction get blurred
In times of uncertainty you need journalism you can trust. For only R75 per month, you have access to a world of in-depth analyses, investigative journalism, top opinions and a range of features. Journalism strengthens democracy. Invest in the future today.
Subscribe to News24
Related Links
Twitter briefly restricts Trump campaign account, Republicans decry company's actions
Combative Donald Trump insists pandemic almost over, Joe Biden says he did 'nothing'
US Supreme Court allows Trump to wind down census early
Next on News24
Canada extends international travellers ban as Covid-19 cases rise 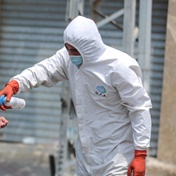