US envoy: Syria's Assad is war criminal but US may need him 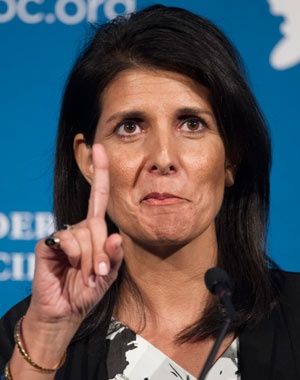 United Nations - US Ambassador Nikki Haley says Syrian President Bashar Assad is "a war criminal" who has been an obstacle to peace for years - but she says the United States isn't ruling out cooperating with him to defeat the Islamic State extremist group.

Haley told a news conference on Friday that what Assad has done to the Syrian people "disgusting."

She echoed the Trump administration's declaration on Friday making clear that the US focus is on defeating IS. She said last week it wasn't pursuing a strategy to push Assad out of power.

Haley said Friday the US focus is on negotiations in Geneva aimed at ending the more than six-year Syrian conflict, though that could change.

"Right now Assad is not our number one person to talk to," she said.

We live in a world where facts and fiction get blurred
In times of uncertainty you need journalism you can trust. For only R75 per month, you have access to a world of in-depth analyses, investigative journalism, top opinions and a range of features. Journalism strengthens democracy. Invest in the future today.
Subscribe to News24
Related Links
EU sees no future for Assad in Syria: foreign ministers
UN: Syrians trapped in besieged areas face horrific threat
Number of Syrian refugees passes five million: UN
Next on News24
Catholic Church apologises to Canada indigenous peoples for school abuses

3 bag the jackpot in the Daily Lotto
Full list of lottery results
Lockdown For
DAYS
HRS
MINS
Voting Booth
Have you ever purchased a fake luxury/designer item?
Please select an option Oops! Something went wrong, please try again later.
Yes, I believed it was authentic
7% - 225 votes
Yes, I didn't want to spend that much money on the original item
20% - 668 votes
No, I always shop at reputable stores
14% - 464 votes
No, I don't wear designer clothing
60% - 2008 votes
Previous Results
Podcasts
PODCAST | The Story: Spotlight on filicide - what triggered Lauren Dickason? And how to get help