WATCH | At least 45 dead in Germany as storms ravage Europe The village in the district of Ahrweiler is largely destroyed and flooded after the storm with high water (photo taken with a drone). (Photo by Boris Roessler/picture alliance via Getty Images)

Heavy rains and floods lashing western Europe have killed at least 45 people in Germany and left many more missing, as rising waters led several houses to collapse on Thursday.

Rhineland-Palatinate and North Rhine-Westphalia (NRW) states were the worst hit in Germany by the deluge, which has caused rivers to burst their banks and threatens to bring down more homes.

At least 18 bodies were recovered in the region around the western town of Ahrweiler alone, a police spokesman told AFP. Local officials had earlier reported up to 70 people missing.

Farther north, the district of Euskirchen in NRW reported 15 dead.

Desperate residents sought refuge on the roofs of their homes as helicopters circled above to rescue them from the rising waters.

Pensioner Annemarie Mueller, 65, looking out at her flooded garden and garage from her balcony, said her town of Mayen had been completely unprepared for the destruction.

Where did all this rain come from? It's crazy.

"It made such a loud noise and given how fast it came down we thought it would break the door down."

Chancellor Angela Merkel said she was "shocked" by the devastation and thanked the "tireless volunteers and emergency service workers" at the scene.

NRW leader Armin Laschet, who is running to succeed Merkel in September elections, cancelled a party meeting in Bavaria to survey the damage in his state, Germany's most populous.

"We will stand by the towns and people who've been affected," Laschet, clad in rubber boots, told reporters in the town of Hagen.

Four of the dead were in the municipality of Schuld south of Bonn where six houses were swept away by floods, a police spokesman in the city of Koblenz said.

Several other bodies were recovered from flooded cellars across the region. 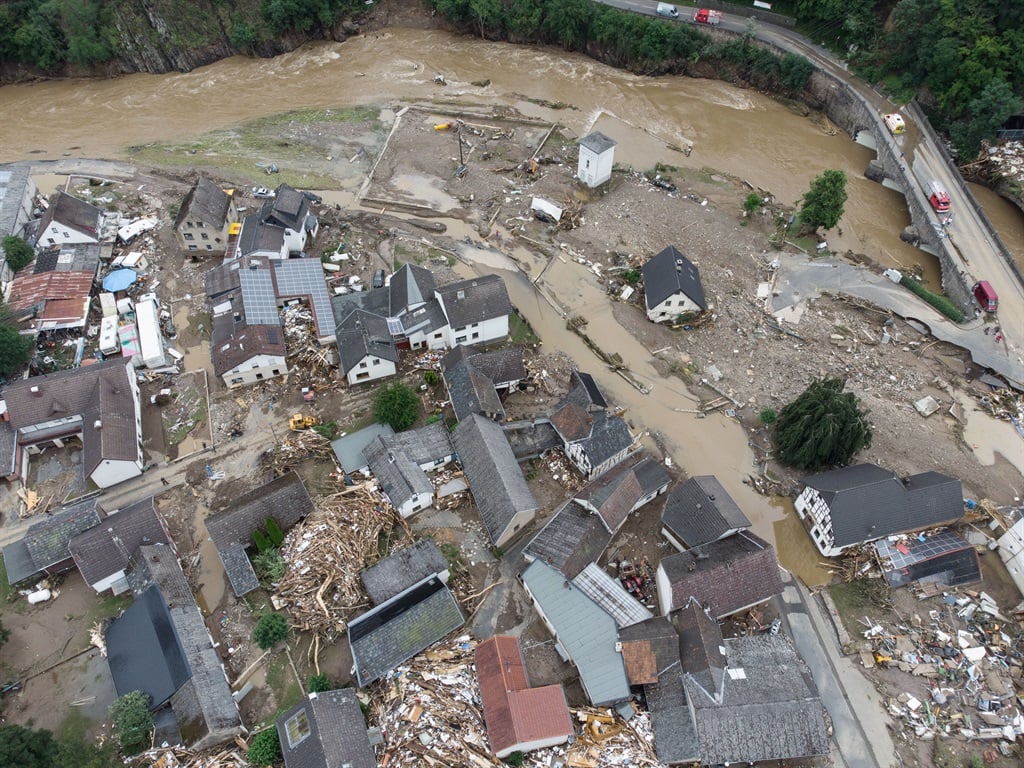 The village in the district of Ahrweiler is largely destroyed and flooded after the storm with high water (photo taken with a drone). In the process, the flood has washed branches and rubbish into the interior of the village, where they are piling up. At least six houses were destroyed by the floods. Photo: Boris Roessler/dpa (Photo by Boris Roessler/picture alliance via Getty Images)

The environment ministry in Rhineland-Palatinate warned it expected floodwaters on the Rhine and Moselle rivers to rise with more rainfall.

Emergency workers struggled to evacuate people in endangered buildings and two firemen were killed Wednesday in the line of duty in the towns of Altena and Werdohl.

Police set up a crisis hotline for reporting missing loved ones and residents were asked to send in videos and photos that could help them in the search.

Regional official Juergen Pfoehler urged people to stay home "and, if possible, go to higher floors" of their houses.

The German military deployed some 400 soldiers across the two affected states to assist in rescue efforts.

In the city of Leverkusen, a power outage triggered by the storms led to the evacuation of a hospital with 468 patients.

City authorities reported that after intensive care patients were moved to other facilities overnight, the other wards would have to be cleared in the course of the day.

Belgium has also seen several days of heavy rain that has caused rivers in the French-speaking region of Wallonia to burst their banks. Four were reported dead.

The provinces of Liege and Namur were especially affected, with the resort town of Spa completely flooded. In the town of Chaudfontaine, daily Le Soir reported that nearly 1 800 people had to evacuate.

The country's Infrabel rail network said it was suspending services in the southern half of the country, given the risks to travel.

The southern Dutch province of Limburg, which is bordered by Germany and Belgium, also reported widespread damage with rising waters threatening to cut off the small city of Valkenburg west of Maastricht.

Local news footage showed small rivers of water flowing through the scenic city centre's streets and at least one old age home had been evacuated.

Officials also closed off several roads including the busy A2 highway, while fears remained that water from heavy rains in Germany and Belgium would push up river levels as it reached the Netherlands.

Meanwhile the Luxembourg government set up a crisis cell to respond to emergencies triggered by heavy rains overnight as Prime Minister Xavier Bettel reported "several homes" had been flooded and were "no longer inhabitable".

We live in a world where facts and fiction get blurred
In times of uncertainty you need journalism you can trust. For only R75 per month, you have access to a world of in-depth analyses, investigative journalism, top opinions and a range of features. Journalism strengthens democracy. Invest in the future today.
Subscribe to News24
Next on News24
'Openness and honesty' of Russia parliamentary vote most important thing for president - Kremlin

Lucky Sunday for 2 Daily Lotto players
Full list of lottery results
Lockdown For
DAYS
HRS
MINS
Voting Booth
With the Springboks losing their last two matches against Australia, how concerned are you?
Please select an option Oops! Something went wrong, please try again later.
Very concerned! Something is not right ...
59% - 1398 votes
I'm not worried. Every team has a bad game. The Boks will bounce back.
17% - 402 votes
It's too early to tell. Let's see how they go against the All Blacks.
24% - 576 votes
Previous Results
Podcasts
PODCAST | My Only Story: Teen's suicide reveals shadowy ring of predators at top SA schools