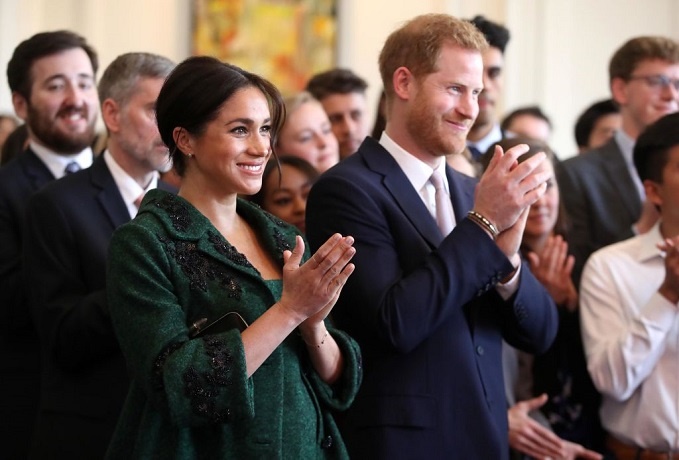 The Duke And Duchess Of Sussex Attend A Commonwealth Day Youth Event At Canada House.

The royal baby was born yesterday (6 May) at 5.26am, weighing just over 3 kilograms and according to his father, the little guy is "absolutely amazing."

Addressing the press for an official announcement, Harry was every bit the proud dad as he described what every first-time father feels.

"As every father and parent will ever say, you know, your baby is absolutely amazing, but this little thing is absolutely to-die-for, so I'm just over the moon," he said, clearly ecstatic.

This afternoon, His Royal Highness The Duke of Sussex shared the news of the arrival of his and the Duchess’ first born child. Their son was born early morning on the 6th of May, 2019 and weighs 7lbs and 3oz. Their Royal Highnesses thank you for your support and kindness during this exceptionally joyful time in their lives as they welcome their baby boy.

Meghan and Harry have yet to decide on a name and "as planned" the public will only catch a glimpse of the new royal addition in a couple of days.

True to their word, the couple only announced the birth several hours after their baby boy was born, and have not presented the child to the public as William and Kate had done with each of their children.

Their decision to keep the birth private has caused quite a stir among royal watchers, and the speculation leading up to the birth had seriously taken on a life of its own.

Questions ran rampant, usually along the lines of, do they deserve a private birth? Why has Meghan forgone royal protocol? Why does she get to choose a home birth? Is there anything private about being a royal?

Other than securing Meghan's spot as Google's Most Searched Woman for a second year running, it's really none of our business.

We recently published a tongue-planted-firmly-in-cheek article, speculating (yes, we're guilty too) about Meghan’s reasons for keeping the details about her birth private, and if we had to summarise the overwhelming response from our readers in just one sentence it would be:

Here's some of the feedback we received:

"If you look at the way celebrities do their baby announcements and birth announcements it is always sooo [sic] private.  My thought is she still thinks like a celebrity and not a Royal." - Yolandi

"As a human, never mind being a royal, she has all the right in the world not to show off her baby now. Everybody should just be patient, and stop obsessing about this so much!" - Najma

What are your thoughts on Meghan and Harry changing the tradition set by Princess Diana? Tell us and we could publish your comment. Here's why new moms , public figure or not, need privacy.

Sure, in so many ways, being royal and keeping things private is a privilege, even so, when talking first-time parenting, privacy is not so much a right, but rather a need.

What the medical community has to say

In 5 top tips for day 1 with your newborn baby, Paediatrician Dr Britta McLaren stresses the importance of rest and even cautions keeping visits from family members to a minimum.

"No doubt you will be excited to show your new baby to family and friends, but plan some time to get some rest as well," she advises.

In Baby’s first outing: When is it the right time to take your newborn out in public for the first time? Writer Pearl Rantsekeng spoke with both medical and cultural experts alike, and found "the medical consensus is that for the first six to eight weeks of the baby’s arrival, new parents should exercise caution about taking their newborn to crowded places."

Since their immune systems aren't fully developed yet, keeping your newborn away from public spaces is advised.

Beyond the medical, cultural views also play a role in guiding a new mother's decision to take her baby out in public.

According to the University of Zululand's Professor Jabulani Maphalala, it's not uncommon for Zulu moms to remain indoors for a month, during which time certain rituals are performed.

"There are ‘izintelezi’ and ‘izinyamazane zakubo’, traditional concoctions that the child is given to drink.

"By the time the baby goes out to meet the world the family is sure that his immune system is strong enough to withstand any kind of illness that he might be exposed to in public,” he told Pearl.

In Latin America, this period is 40 days long and referred to as La cuarentena, and in China, moms traditionally do not go outside for 30-days and this phase is called Zuo yuezi.

If a family member or friend has just given birth and you're not quite sure what the protocol should be, we've laid out a few ground rules to follow. And as far as Meghan and Harry go, our readers could not be more right, we need to stop obsessing and remember that royal or not, this is Meghan and Harry's first baby, and they more than deserve their right to celebrate in private. Besides, when have the Royals ever denied the public a good photo op?

What are your thoughts on Meghan and Harry changing the tradition set by Princess Diana? Tell us and we could publish your comment.

We live in a world where facts and fiction get blurred
In times of uncertainty you need journalism you can trust. For 14 free days, you can have access to a world of in-depth analyses, investigative journalism, top opinions and a range of features. Journalism strengthens democracy. Invest in the future today. Thereafter you will be billed R75 per month. You can cancel anytime and if you cancel within 14 days you won't be billed.
Subscribe to News24
Related Links
WATCH: While we await the arrival of Royal Baby Sussex, enjoy these throwbacks of an adorable...
Lord Arthur, Lady Diana and 63 other potential names Harry and Meghan might settle on for their...
Parent like the royals: 3 ways the Duchess of Cambridge gets Princess Charlotte to listen
Next on Parent24
'A flexible routine': Sleep coaches share six ways to soothe newborn sleep struggles