‘Our baby had a flat head’ 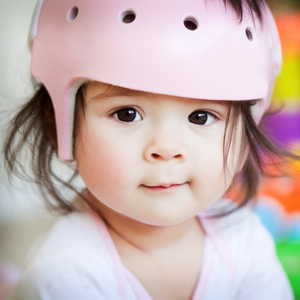 cute girl with helmet
When Pretoria-based Gerard and Bronwyn Kohler found love and decided to marry, it was only a year before their son, Connor, was born.

Other than the typical changes that being new parents brings on, the couple soon discovered that something was not quite right with Connor. ‘As a baby, Connor had a favourite side to sleep, and we indulged him because we really had no idea that it could lead to problems,’ explains Bronwyn, who first noticed at 5 months that Connor’s head was becoming flat on one side. ‘It happened within a space of a few weeks, literally…’ she remembers.

Despite trying to reposition Connor during sleep and awake time, there was no improvement in his head shape. ‘We saw 4 doctors and even consulted one of the top craniofacial surgeons in the country and none of them could, or wanted to, help Connor. In fact, more than one doctor told us just to grow his hair or put a hat on him,’ Gerard says.

Because the condition that Connor had, which is called positional plagiocephaly or Flathead Syndrome, is not considered life threatening, until recently it was not something that many local doctors considered worthy of intervention.

‘We discovered that there was treatment available internationally in the form of a specially designed helmet that would help our son’s head to grow into a more natural shape, but nothing was available locally,’ says Gerard.

The desperate couple were lucky enough to be sponsored by their parents to take Connor to Germany to a clinic where he was measured up and fitted with his own specially made helmet within 48 hours.

‘It was amazing to have gone from an attitude of total nonchalance to efficient and compassionate care for our baby,’ says Bronwyn, clearly relieved that they were able to make a difference for their son.

Within 3 months of wearing his helmet, Connor’s head saw a 95% correction to a more natural shape and today he’s a typically developing, happy little toddler. ‘It’s really important to get treatment before 5-7 months of age, the earlier the better, because this is the time that a baby’s head grows most rapidly, allowing for the helmet to do its job of gently guiding the head back into shape,’ says Gerard.

Once Gerard and Bronwyn had helped their son, they turned their attention to changing perceptions and support within South Africa. ‘We were lucky enough to have our story printed in a local magazine and we received many contacts from other parents who were in a similar situation,’ explains Gerard.

From that point Gerard has not only started an ad hoc support group, but he has also designed and launched a specially designed pillow that will reduce the risk of babies developing plagiocephaly in the first place.

Gerard not only offers support and information, he also helps financially destitute families to get the help that they need, “It means that he actually goes and fetches them from their home, drives them to the local government hospital, sees the doctor and tries to raise funds to pay for the specialised helmet,’ Bronwyn says, proudly.

‘The most important thing for parents to remember is to alternate their baby’s sleeping position, give their baby lots of tummy time, and if they do develop this condition, they must act quickly and never accept that they must simply grow their baby’s hair,’ says Gerard.

For more information or support, contact Gerard Kohler on 072 187 1779 or email bestforbaby@mweb.co.za

Did your baby have Flathead Syndrome? How did you get help?

We live in a world where facts and fiction get blurred
In times of uncertainty you need journalism you can trust. For 14 free days, you can have access to a world of in-depth analyses, investigative journalism, top opinions and a range of features. Journalism strengthens democracy. Invest in the future today. Thereafter you will be billed R75 per month. You can cancel anytime and if you cancel within 14 days you won't be billed.
Subscribe to News24
Related Links
The safest sleep position
Baby got a flat head?
Special needs: you can do it!
Next on Parent24
Infant Illnesses | Spotlight on adenovirus

Read more on:
healthsafetybaby
Events
Sasol is looking for bursars for an all-inclusive bursary for 2023 - Apply now