Is baby-led weaning really a good idea for my baby? Experts give their advice 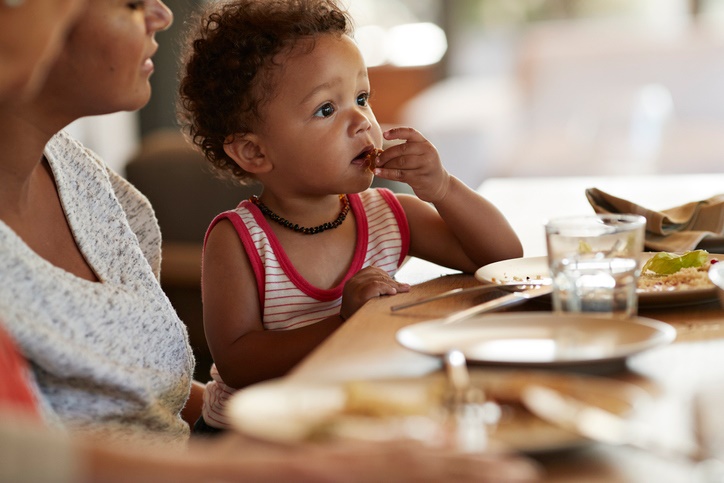 Your baby will let you know when it's time for solids. (Klaus Vedfelt/Getty Images)

For many parents, giving their baby a piece of toast or a stick of celery as a first meal would be absolutely out of the question.

But this is precisely what baby-led weaning is. It is giving your child suitably sized food portions and letting her feed herself instead of spoon-feeding her puréed food. The term was coined by Gill Rapley, a UK-based author, midwife and health visitor.

It was first used in the book Baby-Led Weaning, which Gill co-authored with Tracey Murkett.

According to Gill, the idea came about so that parents wouldn't have to prepare separate meals just for their babies and could feed them whatever the family ate.

Parents usually start this as soon as their babies can sit upright and support their heads. This is around six months, which is the age the World Health Organisation suggests that babies be introduced to solid foods.

At this age, babies are able to grasp things to put into their mouths. Gill says many parents who have older kids have discovered baby-led weaning by accident. Their babies simply helped themselves to food from someone else's plate.

"For many years, parents have been encouraged to give their babies finger foods from six months to encourage them to develop chewing skills."

"The mistake that has been made is that most people assumed babies needed purées before they could move on to finger foods. But babies don't prepare for chewing food by sucking purée from a spoon – the best way to develop chewing skills is to practise them," Gill explains.

ALSO READ | Play, movement and loads of love: How to boost your child's early brain development

Baby-led weaning is based on babies' natural development and allows them to move on to solid food when they are ready and to explore food instinctively with their hands and their mouths. Babies also learn to eat safely.

Handling food helps them to learn how much to put into their mouths. Babies also get to practise their dexterity and hand-eye coordination by gripping foods of different sizes and textures, giving them confidence and helping their development.

Gill believes that by feeding themselves, babies learn to enjoy and trust their food, because each taste and texture is separate, rather than puréed together.

"Babies can decide what to eat from the food offered and how much to eat. What's more, babies develop healthy appetite control that allows them to eat at their own pace. Deciding when they've had enough may even help to reduce the risk of obesity and eating disorders later on," she says.

In addition to this, Gill believes that babies who lead their own weaning are usually introduced to a wide range of healthy foods, which makes it more likely that all their nutritional needs are met.

They may also be less likely to choose unhealthy foods when they are older. She maintains that with this type of feeding, mealtime battles and picky eating in toddlerhood are also less likely because babies are in control of what they eat.

"With no need for games or persuasion, mealtimes are relaxed and enjoyable for the baby and her parents," she says.

She adds that babies can also copy their families' mealtime behavior, so they learn what's expected, and how to eat different foods, share, wait their turn and make conversation.

ALSO SEE | The effect of Covid-19 on the food system: 'The cost of feeding a child increased by 5%'

"Mealtimes have a positive impact on family relationships, social skills and language development too. Best of all, meals are quick and easy to make. And – provided the parents' diet is healthy – they can easily adapt their meals for their baby too. Eating out is easier too because there's no need to take separate food along for the baby," she says.

"But like most new ideas and trends, it may not always be completely practical. This is why we advocate a modified version of baby-led weaning, where the parent has some control but at the same time, the baby has her own bowl of softly steamed whole food too."

While, Kath supports the concept behind baby-led weaning, she stresses that it should by no means be regarded as the only way to feed your baby. "I agree with Gill that we need to stretch parents to go beyond the comforts of puréed food – many feed them much for far too long," she explains.

"But this does not mean it's necessarily the way to go for all parents and might not work for every family."

Only if it suits you

"What I would suggest, then, is a combination," she says. "Start with the puréed stuff and then move onto the finger foods at about seven months, combining the two at mealtimes too."

From about nine months onwards, start moving slowly from the purées and toward full-on baby-led weaning. This approach should also suit your family's daily eating habits. If you're the type of family that eats spicy foods, like curries or takeaways, baby-led weaning is not a good option, as you'll have to provide alternative meals for your baby anyway, Kath explains.

The idea of sitting down as a family and all enjoying pretty much the same healthy meal together is, of course, wonderful. But, as Kath points out, we need to make peace with the fact that it's not always practical.

Babies generally need their dinner quite early, like at around 1700, when the rest of the family is not hungry yet and maybe not even at home yet either. For this reason, she suggests that "a good idea is to try to introduce baby-led weaning on the weekend, when you are all together".

There's also more time and flexibility over the weekend, which isn't a bad thing because you need quite a bit of patience with the baby-led weaning system, especially at first. As Kath reminds us, it's about allowing your baby to basically play with her food, and if you want anything to go in, it's going to take time.

One last thing to remember, if you're considering this option, is that it's going to be messy. Very messy.

1. Breathe through the mess! Spread a clean mat under your baby’s chair to protect the floor – and so you can hand dropped pieces back to her.

2. Don't expect your baby to eat much at first. Many babies eat small amounts for the first few months. It may help to think of mealtimes as playtimes in the beginning.

3. Keep it enjoyable. That way your baby will be keen to try new foods and look forward to mealtimes.

How do we get started?

Sit your baby upright, facing the table, either on your lap or in a highchair. Make sure she is steady and can use her hands and arms freely.

Offer, rather than give, your baby food. Put it in front of her or let her take it from your hand so that the decision is hers.

Start with foods that are easy to pick up. Thick sticks or long strips are best at first. Introduce new shapes and textures gradually, so that your baby can work out how to handle them.

Include your baby in your mealtimes whenever you can. As far as possible – as long as it's suitable – offer your baby the same food as you are eating, so that she can copy you.

Choose times when your baby is not tired or hungry so she can concentrate. Mealtimes at this stage are for play and learning. She'll get all her nourishment from her milk feeds.

Carry on offering breast or formula as before, as they are still your baby's main source of nutrition until she's a year old. When your baby needs less, she will reduce milk feeds herself.

Offer your baby water with meals, so she can drink if she needs to.

Don't hurry your baby along or distract her while she's handling food. Allow her to concentrate and take her time.

Don't put food into your baby’s mouth for him or try to persuade her to eat more than she wants to.

We live in a world where facts and fiction get blurred
In times of uncertainty you need journalism you can trust. For 14 free days, you can have access to a world of in-depth analyses, investigative journalism, top opinions and a range of features. Journalism strengthens democracy. Invest in the future today. Thereafter you will be billed R75 per month. You can cancel anytime and if you cancel within 14 days you won't be billed.
Subscribe to News24
Related Links
Are you supporting your children and parents financially? You are not alone, and here are some tips
PICS | From daddy-daughter goals to hair goals this fierce duo is taking over the internet
Fun with colour: Help your little one master colour before she goes to Grade R
Next on Parent24
'A flexible routine': Sleep coaches share six ways to soothe newborn sleep struggles