It can often be pretty difficult to convince a determined two year old to quit nappies.

To avoid this conflict, many families are adopting a different approach to toilet training, one that is more commonly used in other parts of the world, including China, parts of Africa, India, and South and Central America.

It involves starting toilet training from birth by following the child’s cues.

Instead of using nappies, children learn to go in an appropriate receptacle from two weeks old. Babies are placed on the toilet or some other suitable place (such as a cup, a potty, a bucket or even the ground) after a meal or when they show signs of wanting to eliminate.

If the baby does this right, it is rewarded with food or affection.

As far back as 1977, researchers suggested,

Research shows this process can help babies quickly learn to eliminate in a convenient place.

It works through two way communication between the caregiver and the infant. Caregivers follow the infant’s cues and can also signal to the baby to eliminate.

How effective is it?

Some argue, based on this cultural difference, that babies are aware of their need to eliminate from birth. Others suggest that infants prefer to be dry and would rather not be left in a dirty nappy.

It is this preference that makes elimination communication easy.

One study found that children who used this method (from 33 days) were toilet trained by five months of age.

In this study, the parents noted the child’s signal to eliminate and held the infant’s back to the caregiver’s chest while sitting over a toilet.

While the baby eliminated, the caregiver used vocal signals to reinforce the behaviour.

Usually these signals are a “psss” sound for urine and a different sound for faeces (we’re trialling this method and using a “plop” sound).

Cultural and social differences around nappy use

Some parents prefer disposable nappies, which are said to reduce nappy rash – a red and inflamed rash around the nappy area, caused principally by wetness and bacteria or yeast – and other skin conditions including eczema. 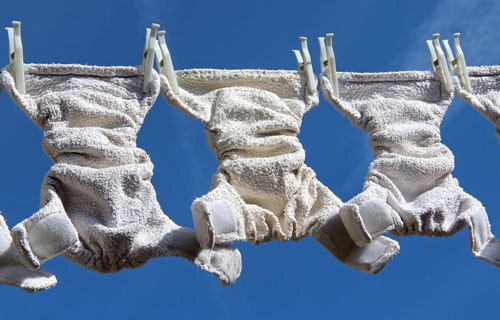 Some parents prefer to use reusable nappies. iStock.com

There are two types: two-part nappies that often have an insert and an outer, waterproof, layer; and all-in-one nappies that combine the inner absorbent layer with the waterproof outer layer.

Parents also need nappy liners. But cloth might not be as environmentally responsible as many parents believe.

There is evidence of major environmental issues including the water and pesticides used in cotton farming, the principal ingredient in reusable nappies.

The need for cleaning products, hot water and constant washing may also be environmentally damaging. Cloth nappies generally soak through more quickly than disposables and need to be changed more often.

What’s more, the care-giver’s labour is not cost neutral and may not be factored into the evaluation of cost and benefits of reusables.

Toilet readiness is usually considered a developmental milestone, where bladder and bowel control is linked to maturation.

For toilet training to be successful, children must be able to walk to the toilet after recognising the need to eliminate, manage clothing, eliminate fully, clean, manage clothing again and flush.

Over the last 80 years, Western families have been increasing the age at which they toilet train, from less than 18 months 40 years ago, to between 21 and 36 months today.

Starting toilet training at 18 months may be related to medical advice.

Thinking about when to start toilet training has shifted since the early 20th century.

In the 1920s, for instance, 12 months was considered suitable. By the 1960s, the advice was later than 18 months. Researchers suggest changes may be due to parents’ work schedules, convenient disposables and a more liberal approach to parenting.

Children with special needs may take longer learning to use the toilet.

The relationship between caregivers and babies is complex. It may be that, with careful observation of infants’ cues, parents can learn to understand their child’s needs.

We are certainly hoping so in our family to avoid buying nappies for three more years and cleaning up after inevitable misses.

Rebecca English, Lecturer in Education, Queensland University of Technology. This article was originally published on The Conversation. Read the original article.

Would you try the Elimination Communication method? What potty training method are you following, and how has your experience been so far? Got any funny potty training stories you'd like to share? Tell us by emailing to chatback@parent24.com and we could publish your letter. Do let us know if you'd like to stay anonymous.

Sign up for our weekly newsletter to receive Parent24 stories directly to your inbox.
We live in a world where facts and fiction get blurred
In times of uncertainty you need journalism you can trust. For 14 free days, you can have access to a world of in-depth analyses, investigative journalism, top opinions and a range of features. Journalism strengthens democracy. Invest in the future today. Thereafter you will be billed R75 per month. You can cancel anytime and if you cancel within 14 days you won't be billed.
Subscribe to News24
Related Links
Potty training made easy
Simplify potty training with these toys for boys
Dry through the night
Next on Parent24
'A flexible routine': Sleep coaches share six ways to soothe newborn sleep struggles