What SA parents could expect if we banned disposable nappies 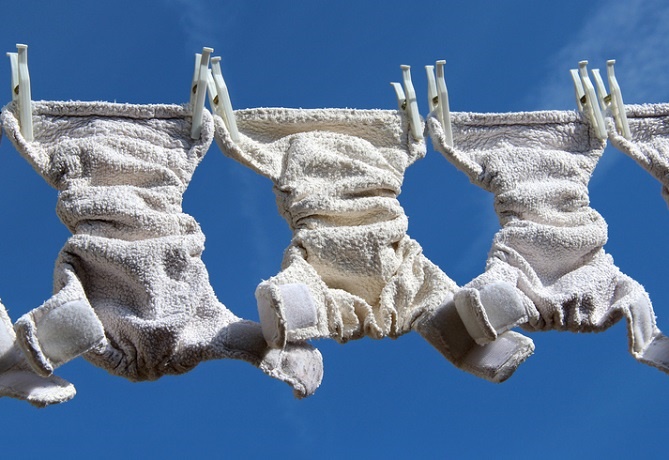 Ever stalked the streets the night before bin day, searching for half-empty bins to dump their surplus dirty nappies? Ya, cloth nappy parents don't have that problem.

As our cousins from down under ponder all the ways the recent ban of disposable nappies in one Pacific island country, Vanuatu, may play out in their part of the world, we wonder what this might look like on our shores. Kelly Dombroski paints the picture of what society would be like without disposable nappies.

This year, the small Pacific Island nation of Vanuatu announced a plan to ban disposable nappies, as well as other throwaway items such as plastic bags.

While some commentators praised the move, others worried about what the alternatives might be, and how this might affect household workloads, particularly for women.

Although most landfill waste in Australia and New Zealand consists of building waste, disposable nappies make up a significant percentage of household waste entering landfill – Australia uses an estimated 3.75 million of them every day.

Many urban parents find that a week’s worth of nappies barely fits into their kerbside bin, especially for families with two children in nappies.

I’ve certainly met these parents stalking the streets on the evening before bin day, searching for half-empty bins to dump their surplus dirty nappies.

But this is not the only problem: nappies are a significant source of contamination in the waste stream. Infant faeces are a source of live vaccine, bacteria such as E. coli, and many other hazardous contaminants.

The correct procedure is to scrape faeces into the toilet before disposing of the nappy. But let’s be honest – the whole attractiveness of disposable nappies is not having to do this, especially while out and about.

Are you a cloth nappy parent? What's your biggest motivation? Share your story with us, and we could publish your mail. Anonymous contributions are welcome.

Lessons from a bygone age

So what is the alternative? Obviously, before disposable nappies, parents had to use cloth nappies. In Australia, the standard was the fluffy terry cloth folded into a triangle; in New Zealand, the flat flannelette folded differently for boys and girls.

Traditional cloth nappies were much less absorbent, and therefore had to be changed about 15 times per day, before being washed, dried, and folded for next time. It’s no coincidence that this practice dates to an era when households typically featured a stay-at-home mother.

In recent years, modern cloth nappies have emerged, with more absorbent designs that require less frequent changing. They use modern materials such as microfibre, microfleece, polyurethane laminate, and fabrics derived from bamboo.

These nappies may be snug in design, pleasing to the eye, and less prone to leaks. They also require less water for laundry, because they can be put straight into a washing machine rather than being soaked as traditional nappies were.

Yet, as Ni-Vanuatu commentators have already pointed out, these designs are not necessarily suitable for tropical climates or warmer weather due to the use of non-breathable fabrics. These fabrics might also encourage nappy rash and other related problems for babies’ delicate skin.

Also see: Toilet training from birth? Yes, it is possible

The search for alternatives does not need to be limited to Oceania, however. My research with families with young infants in northwestern China examined a practice known as ba niao, or “holding out to urinate”.

This method of infant hygiene involves very limited use of nappies, meaning laundry can feasibly be done by hand.

Briefly, it involves learning the signals and timing of a baby’s patterns of poop and pee, then holding them out over a basin, toilet or potty for them to release, nappy-free.

Caregivers look for signs such as squirming, pushing, fussing, stillness, and other forms of more direct communication that precede an “elimination”.

As babies get older and begin to walk, they can be taught to urinate in Chinese-style squat toilets or other appropriate places, with the help of pants with a hole cut out of the crotch.

In colder parts of China, this is done by using several layers of pants, each with a hole, so babies do not have to be undressed. Caregivers tuck nappy-cloths made from old sheets or other soft rags up into the waistband of the pants, to be quickly and easily removed when a baby seems ready to “go”.

If the caregiver misses the signal, the small, light cloth can be easily handwashed and dried on a balcony or radiator. If the caregiver is not near a toilet, the baby may even be held out over the ground or tiles, and urine cleaned up with a mop.

For faeces, babies are encouraged into a regular routine through a large morning feed of milk, and patient “holding out” until the morning elimination is done.

If the baby’s bowel movements are less predictable, perhaps due to illness, some families use disposable nappy pads, tucked in the same way as the traditional nappies, but more as a backup for missing a signal rather than relying on it.

Households without indoor toilets also use this method, including families who live in their shop and rely on public showers and toilets for hygiene.

This method is used by rich and poor families alike. Research by disposable nappy producers Proctor & Gamble estimated that Chinese consumers of disposable nappies use only one per day – or more accurately, per night.

Even those who can afford disposable nappies tend to eschew them in favour of ba niao during daylight hours. Besides a lot less laundry, the reported benefits include less nappy rash, earlier toilet independence, and less crying and fussing.

Read more: Toilet training from birth? It is possible

Is this a realistic practice for countries seeking to quit disposable nappies? It may seem far from westernised norms, but my research has also analysed the content of Australian and New Zealand-based web forums and Facebook groups, with collectively around 2,000 members.

These caregivers, mostly mums, are trying to work out the best way to introduce a similar practice to everyday life here, too.

They are inspired by the fact that this is possible in other parts of the world, and may indeed be a key to reducing the laundry load. And if they’re not quite ready to quit disposable nappies altogether, they might at least give up the weekly raid on the neighbours’ rubbish bins.

Are you a cloth nappy parent? What's your biggest motivation? Share your story with us, and we could publish your mail. Anonymous contributions are welcome.

We live in a world where facts and fiction get blurred
In times of uncertainty you need journalism you can trust. For 14 free days, you can have access to a world of in-depth analyses, investigative journalism, top opinions and a range of features. Journalism strengthens democracy. Invest in the future today. Thereafter you will be billed R75 per month. You can cancel anytime and if you cancel within 14 days you won't be billed.
Subscribe to News24
Related Links
John Legend encourages dads to be more involved in diaper duty
Why are there still no baby-changing tables in men's toilets? This dad is not letting it slide
Is it really nappy rash?
Next on Parent24
Infant Illnesses | Spotlight on adenovirus