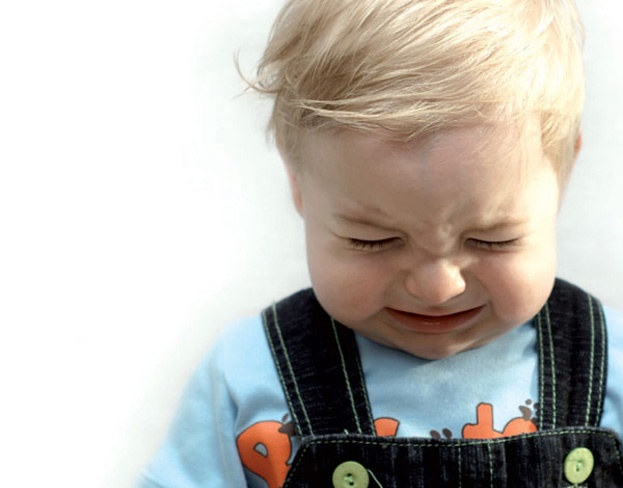 When your one-year old starts throwing himself on the floor in a fit of rage, it doesn’t mean that the
terrible twos have come early or that your child is advanced in his development. What it means is that you have a perfectly normal one-year-old who is acting just as he should be.

He can’t talk, sometimes he can’t walk yet, and in general, there’s just a whole lot of stuff that he can’t do, which leaves him feeling understandably frustrated. As a result, he expresses himself by either screeching, screaming, crying or packing the whole lot into one mighty tantrum that will leave you fearing the worst for the years to come and wondering what happened to your sweet baby.

“Most of the problems that you might experience with your one-year-old are tied up with language skills,” explains Sister Ann Richardson, author of popular book Toddler Sense.

A lot of one-year-olds aren’t mobile yet. They understand a lot of what’s going on around them, but they don’t have the means to communicate or interact as they might want to. The one-year-old also doesn’t quite understand why you’re taking stuff away from him – or perhaps even why a ball might be rolling away from him – and will get absolutely furious if this happens.

Obviously though there are things that your babies simply aren’t allowed to play with – valuable items such as your cellphones, and dangerous items too, such as glass vases or plug points – and your child will not be able to have everything he wants (a lesson we all learn at some point or another). So what do you do?

Reading lots of picture books and teaching your child to point at what he wants – basic things such as a bottle or a piece of fruit – can be helpful in terms of encouraging communication. A baby walker– not to be confused with a walking ring – that he can use to get around before he masters the art of walking on his own can be useful in the transition phase too.

If you take an item away from your baby, the best thing to do is to replace it with something else, but you need to ensure that it doesn’t come across as if you’re rewarding your baby for taking what’s not his or what could be dangerous. That being said, every baby out there knows the difference between an iPhone and a popup Fisher Price one!

“The answer, then, is to not give your baby your cellphone in the first place, and he will eventually learn that he can’t have it, and there won’t be a tantrum every time you try and take it away from him. If you don’t want him to play with something of yours, don’t give it to him,” Ann says Seems
simple enough.

“I’m a mom too, and I know how easy it can be to give in, but I really think it’s important to set ground rules from early on and be consistent,” she explains. “Toddlers thrive on rules, and the earlier you set them, the better.”

“No tantrum deserves an audience,” Ann says. “Which means the best thing to do if your baby has thrown himself on the floor is to walk away and ignore it – as long as he’s safe, obviously. He will quickly learn that a tantrum doesn’t get your attention.” This means it’s hardly worth throwing a
tantrum anyway.

As hard as it may be, don’t give your baby a treat to appease a tantrum, as he will see this as a reward, and you’ll teach him that all he needs to do to get something nice is throw a tantrum.
When all is said and done, try not to stress about your one year-old, and go with the flow as much as possible.

No age is an easy age, and as with everything that is parenting and baby related, the bad is accompanied by so much good too. Try to focus on that as much as you can.