Babies should be able to have opportunity to be “in charge” of how much they eat.

How babies are fed is often a topic of hot discussion. It’s known that babies should be introduced gradually to solid foods at around six months old.

But in recent years, another question has arisen: should parents be spoon-feeding babies special pureed baby foods or could they just join in with the family and feed themselves from the very start?

Known as baby-led weaning, parents who follow the method believe it has lots of benefits for their baby, such as encouraging them to eat a range of foods and stay a healthy weight. Research suggests that babies who feed themselves are less likely to be fussy and more likely to eat a wider variety of food. But what about their weight?

This is potentially because as long as babies have some opportunity to be “in charge” of how much they eat, they may be better able to eat according to what they need rather than how much food a caregiver might encourage them to eat.

Previous research into the impact of solid foods and weight has not really explored how the other part of a baby’s diet – their milk feeds – might play a role.

Indeed, solid foods should only be part of a baby’s diet. Babies who are between six and 12 months should still be getting lots of energy from breast or formula milk. In fact, at six to eight months old, babies only need less than 200 calories a day from solid foods.

Research with older children shows that using a “responsive feeding style”, where lots of healthy options are offered but parents don’t put too much pressure on how much children eat, is associated with a healthier weight and more varied diet. Children are better able to listen to their own hunger cues and don’t crave foods that are “banned” so much – meaning they are less likely to overeat.

Research with younger babies shows that being “responsive” during milk feeds also matters. For example, bottle fed babies who are fed responsively – with parents looking for cues they are full – drink less than those who are encouraged to finish a bottle. 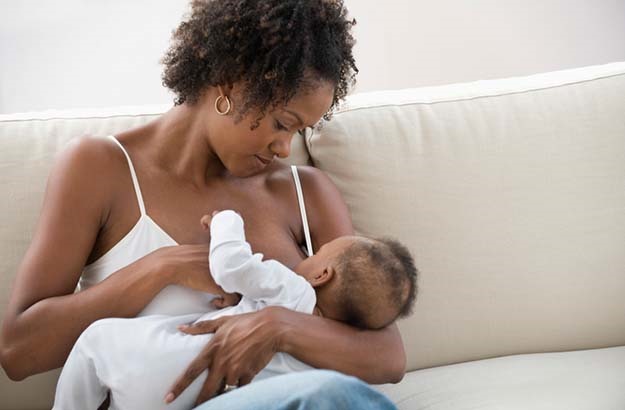 Breastfeeding might make responsive feeding easier as you cannot see how much a baby has drunk, so you have to trust they will feed if they are hungry. It’s also difficult to persuade a baby who doesn’t want to breastfeed to do so. But if you are bottle feeding you can see how much is left and might worry that baby needs to finish the bottle.

This might explain why babies who are breastfed are more likely to be able to control their appetite as toddlers and are less likely to be overweight.

Decisions around feeding babies are complicated and some mothers might face challenges breastfeeding or worry about giving their baby solid foods. But the good news is that most babies, unless there is a particular medical worry about their growth, should be able to have opportunity to be “in charge” of how much they eat.

If you are bottle feeding, try not to worry too much about when and how much your baby feeds. Instead, try “paced” or “responsive” feeding, where smaller amounts of milk are made up and you watch carefully for signs your baby is full.

To do this gently, offer your baby the bottle by stroking their lip and wait for them to show they are ready –- they will open their mouth if they are hungry. Pause regularly and stop when your baby starts to show signs of being full, such as turning their head or pushing the bottle out. Don’t try to encourage them to finish the bottle.

If you are spoon-feeding, let your baby set the pace of the meal. Offer them small spoonfuls and, again, pause in between, looking for signs they have had enough such as turning their head or pushing lots back out. Don’t try to persuade them to finish a jar or eat too quickly. Feeding themselves allows babies to be more in control of the pace and amount they eat. iStock

Remember, guidelines suggest that however you feed your baby you can give them finger foods from the start of weaning. Try foods such as soft cooked sticks of parsnip, broccoli or yam, flakes of fish or toast fingers. Cut food into pieces large enough for them to pick up, so that the food sticks out of the top of their fist. But make sure you avoid foods that could snap off in your baby’s mouth such as hard apple slices or raw carrot sticks or small hard foods such as nuts or popcorn.

Some babies might not eat much at first when they self-feed, but don’t worry. Remember, the experience of learning to eat is important too. Letting babies play with food, feeling its texture and learning how it tastes is all part of their development – just put a mat down and try not to worry too much about the mess!

We live in a world where facts and fiction get blurred
In times of uncertainty you need journalism you can trust. For 14 free days, you can have access to a world of in-depth analyses, investigative journalism, top opinions and a range of features. Journalism strengthens democracy. Invest in the future today. Thereafter you will be billed R75 per month. You can cancel anytime and if you cancel within 14 days you won't be billed.
Subscribe to News24
Related Links
Wits tested baby food sugar levels in South Africa, and their findings are alarming
Pregnant women and babies can be vegans – careful nutrition planning is key
No, giving your baby solid food early won't help them sleep better
Next on Parent24
WATCH | Cardi B reveals her four-month-old son is already speaking