The daddy phase: when mom feels left out 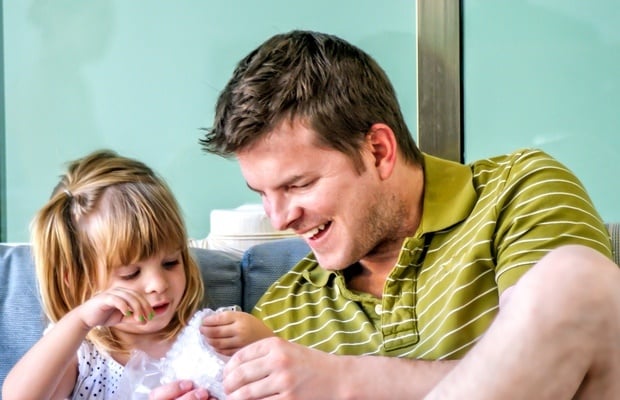 (This article first appeared in Your Baby, Mar/Apr 2014)

The stubbornly uttered phrase of, “Daddy do it, not Mommy!” is familiar to many parents of little ones, and it’s hard not to take it personally. But it’s good to know it’s quite common.

While each situation is unique and dependent on the role of the parents, at some stage toddlers do begin to prefer one parent over the other, and often the father figure takes preference. It’s natural to feel sensitive about this.

Educational psychologist Carol Jamison reiterates that parental preference is not manipulation, but a way of exercising the beginnings of “own choice” as part of the attachment process.

It’s common to hear them demand for dad when it comes to bathing, feeding, putting on shoes or playing. But a few weeks later mom could be back in favour.

“A baby’s social and emotional development is affected by the quality of their attachment to their caregiver. A baby is initially attached to the mom as she is usually the primary caregiver. However, an attachment with the father figure usually complements the relationship the child has with their mom,” says clinical psychologist Tarryn Kelly.

As a baby moves into the toddler phase, she starts to realise she is a separate individual from her mother, and other caregivers, like the father, then become more interesting. Clinical psychologist Robyn Jacobs explains that this stage is connected to toddlers developing a healthy sense of independence, which sees them asserting choices wherever they can.

“This phase of development is linked to object permanence and separation anxiety (part of the developmental theory of Jean Piaget). While in some ways it does have to do with the developing frontal cortex of the brain, which allows the child to make more connections, the theory and phase are part of social and emotional development. This Daddy Phase is largely a recognition of how some children work through their development,” she says.

Tarryn agrees that there are different phases of attachment and each is related to cognitive and physical development.

“For example, a toddler who has developed confidence and independence has the physical and cognitive capacity to understand that ‘although mom is not with me right now, I know she will return and be there later.’ The level of cognitive and physical development of a toddler allows them to have what we call an internal representation of the attachment figure, which allows them to feel secure enough to explore other relationships,” she says.

The age and stage

The phase can start as early as six to eight months and continues until around age two – when object permanence is fully established. “Separation anxiety is most common from ten to 18 months. But new research is saying Piaget’s theory underestimates the development of the toddler mind.

Also, phases of favouring one parent over the other come and go throughout the toddler and preschool years. It doesn’t necessarily last the entire time your child is a toddler,” says Robyn.

It’s a completely normal part of growing up and while most common in the toddler stages, favouring one parent over another can happen at other stages of childhood too, depending on the emotional and developmental needs of the child at the time.

The psychological reasoning behind dad becoming the flavour of the month is a healthy representation that your child is independent, has developed a sense of self and is ready to develop other relationships. “Dad plays a big role in this as he helps the child negotiate her way around separating from mom and gaining this sense of independence.

By choosing dad as the favourite, your child is testing her developing autonomy and control. If parents can manage their own emotions around this (even though it might be very difficult for the excluded parent), it can be a very positive and necessary part of their development and wellbeing,” says Tarryn.

She explains that traditionally the maternal role is more involved in practical and nurturing aspects, whereas dads add the dimension of play to their child’s world. Fathers engage differently with the child, which can also add an element of fun to the relationship that the child enjoys. This doesn’t mean that it’s easy to deal with from the newly relegated sidelines.

But Carol suggests that if you’re feeling seriously rejected to remember that in actual fact it’s a sign of healthy development, and a good bond between father and child from which healthy relationships can grow, as well as shared roles of parenting.

Has your child ever chosen daddy over you? How did you remedy the exclusion? Send us your comments and stories to chatback@parent24.com We might publish your response, please inbox us should you wish to remain anonymous.