Do as I say... not as the President does 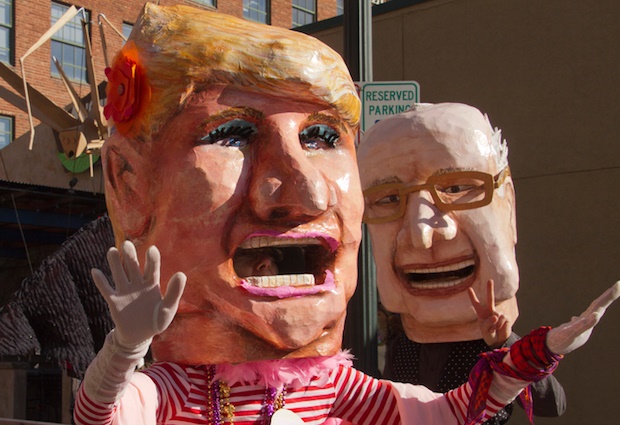 We spend hours, days, years, hammering the same messages into our kids' heads. In our household, we teach our girls these three golden principles: manners, respect, gratitude.

Things get tricky, of course, when they're old enough to follow the news and see a president discredited and ridiculed – and yet we teach them to have respect for the office of presidency, at least.

Read: How do you talk about Mr President in front of your kids?

Moving abroad it's no different. Following the US presidential election campaign was like watching kids during recess at primary school.

Let's be clear: Hillary Clinton is no angel and former staffers have described her mean temper and bully tactics. But shall we, on this historical day, focus on the new president of the United States and respectfully ask him to start behaving.

If you don't like someone, let it go. If someone insults you, have the grace to respond calmly and walk away. Getting involved in a spat just creates a circle of viciousness, and who wants to be in the centre of a hurricane all the time? Rather use that energy to do your homework.

President Donald Trump has beef with people, South Park-style. He calls them names and insults them in such a juvenile way that if he were my eight-year-old kid, I'd revoke all TV privileges for a year (something tells me this will hit him hard).

Case in point: TV star Rosie O'Donnell, known for being outspoken, once called Trump a "snake-oil salesman". I know, that's name-calling. How does he react? By jumping into the ring, calling her a "fat pig", "loser", "disgusting" and "a degenerate". Intelligent riposte for a 71-year-old.

In this video clip below, he responded smugly, "Rosie O’Donnell is disgusting, both inside and out. I mean look at her, she’s a slob…" And again (he likes repeating insults): "Rosie is a slob. She’s crude, she’s tough, she’s arrogant, she’s pushy, she’s disgusting. In certain ways she’s a degenerate." Funny how he can "tell it like it is", but when you're his enemy, you're tough, arrogant and pushy.

The clincher was when he said: "The nice part about me, I’m not running for office. When people attack me, I attack them back." Yeah, that may now become an international problem, sir.

This was recorded by The Entertainment Tonight show on CBS Television in 2006 (name-calling isn't the only bad manners he displayed here, as we'll see later):

Schadenfreude is not nice. Even though that girl laughed when you fell in gym class, if her boyfriend dumps her, we don't air punch.

When Rosie's magazine closed down, Trump was delighted: "I loved it, I gloated about it, because I like to see bad people fail. She’s basically a disaster... I’d fire Rosie, I’d look her right in that fat ugly face of hers and say Rosie, you’re fired."

Sigh. We parents work hard to teach our kids that men and women are equal. We tell them they're beautiful, to respect their and other people's bodies, and that they're worth more than their appearance. Unfortunately, seemingly half of America agrees with Trump that it's okay to brag about groping women by the "pussy". About a contestant on Celebrity Apprentice, he even quipped, "It would be a pretty picture to see her on her knees." What?

In the above clip about Rosie O'Donnell, who is lesbian, he said, "She’s very lucky to have her girlfriend and she’d better be careful or I’ll send one of my friends over to pick up her girlfriend. I mean why would she stay with Rosie if she had another choice?”

4. We play fair and apologise

Things don't always go our way. And when we screwed up, going on the assault just makes things a hundredfold worse. Own up, that's what we tell our kids.

But Donald doesn't like being on the losing side. When he's reminded of things he's blurted out, he calls it unfair. Famously, he butted heads with Fox News Channel's Megyn Kelly in a Fox News GOP debate in August last year.

Megyn asked Trump about his calling some women "fat pigs, dogs, slobs, disgusting animals". He brushed it aside by saying, "I don’t have time for total political correctness... It’s fun, it’s kidding, we have a good time… what I say, I say. If you don’t like it, I’m sorry." Sorry, not sorry.

Here's the clips of the debate and back-and-forth afterwards:

Is it necessary to repeat everything you hear even if it will hurt feelings? Or worse, do you make up stories and spread them specifically to hurt feelings? No, we don't do that.

Back to the clip where Trump blasts Rosie O'Donnell. He blurts out to national television something he claims Rosie's TV boss had said to him over the phone. "Barbara [Walters] will eventually fire Rosie. She can’t stand Rosie. Now, Barbara is going to deny that, and I don’t care. I mean, maybe, Barbara will never speak to me again. She didn’t TELL me to keep it quiet or I would never have revealed that..."

Humility is hard to learn, so we start with this one very young. "We're so proud of you for winning the XYZ, honey, and feel free to tell Gran and Gramps. But don't go about telling everyone because it can make them feel bad, and you're so much more than just a medal. You're kind and a great friend."

Trump has yet to learn this lesson. He's like the boy telling everyone he can wee his name in the snow. The Braggadocchio goes around bragging about his fortunes, the value of this or that development, and the amount of money he says he has given to charity. If that's true. Which brings us to...

Why shouldn't we lie? Because for one, we'll be caught out and look silly. When you're older, your reputation is at stake. More importantly, as my dad taught me, lies are like a crack in a sheet of ice: with each lie the crack widens and widens until the ice sheet breaks in two and drifts apart. People stop trusting and believing you.

Fact-checkers found that during one debate, Trump lied no fewer than 16 times.

One day he'll boast that a development is worth $50 million, another he'll claim it's worth no more than $1.5 million to minimise his tax liability. Oh and the world's top newspaper journalists cannot find any evidence of the vast amounts of charitable donations Trump says he's made.

This article by the Guardian has a fantastic line-up of Trump lies, from fibs to whoppers.

Don't copy your friend's homework, don't take your phone into exams, don't switch tests. Cheating is wrong, and it can even get you expelled.

By now it's common knowledge that "self-made" billionaire Donald Trump hasn't been paying taxes. And boasts about it too. When Hillary Clinton calls him on it during a presidential debate, he smirked, "That makes me smart." Watch it here:

What is so smart about not paying taxes? If you're now the guy in charge of getting people to pay their taxes?

If I'm talking to you or someone else, or I'm on the phone, you wait till I'm done. Interrupting irritates people, it doesn't give them time to present their point, and it's downright disrespectful.

Trump doesn't like to wait though. He's a busy man and he'd rather talk than think:

Also read: Are today's kids ruder than we were?

10. We don't use wing guys to sort out our problems

Reasoning skills are acquired early on (ask any parent of a six-year-old bargaining for ice cream). But there's always that one guy at school that surrounds himself with the burly buddies. The bully, the Biff Tannen (incidentally, this Back to the Future character was based on the actual Trump – true story). He's the one taunting others but as soon as the heat is on him, he turns to his muscled friend to intimidate the other gang and make the problem go away.

Here Trump doesn't like what reporter Jorge Ramos, a Mexican with legal US residence status, is asking him during an open session with the press, so he cuts him off. The journo won't be shut up, however, so Trump has him thrown out. Unbelievably, outside, Trump's aides hurl racist abuse at Ramos, saying he should "go back to his country". Watch:

Talking an issue through, going to the bottom of a dispute and digging deep to see why we react as emotionally as we do – that's the stuff of maturity.

Do I really have to explain this? Just no. Go to your room. How is this acceptable?

Teaching our kids we're all equal, that we should have respect for all people, and be humble and grateful for our own abilities... that's what human beings should have evolved to by now.

Ha. Here Trump pulled the "I won't come to your party unless you give me your lunch money" tactic. Also known as extortion. He was lined up for a CNN debate, but later said he'd pull out unless CNN paid him $5 million to do so.

The reality is, Donald Trump is president of the US now, and in South Africa we have our fair share of leadership problems too. What to do? Let's resist mocking, ridiculing and name-calling those leaders, as easy and tempting as it may be, and instead focus on how we as families can help others and make the world a better place. That could include serving others, voting differently, or petitioning, or protesting. But joining the fracas only divides us further and lowers our standards. The world needs higher standards right now.

How do you teach your kids values when they're surrounded with friends and role models who may not espouse your family's values? Send your comments to chatback@parent24.com for possible publication.

Other Trump stories you may enjoy:

Trump as president: What this will mean for women all over the world

What will Trump's new presidential ride be?

Trum and Hillary-inspired foods that will make you lol

'Homecoming': Saffas are expecting Samuel L Jackson in SA following the US Election

Donald Trump: a brief history of the most controversial presidential candidate in history

How Trump is leading America by the nose: Part 1

How Trump is leading America by the nose: Part 2

How Trump has already made the world an uglier place

We live in a world where facts and fiction get blurred
In times of uncertainty you need journalism you can trust. For only R75 per month, you have access to a world of in-depth analyses, investigative journalism, top opinions and a range of features. Journalism strengthens democracy. Invest in the future today.
Subscribe to News24
Related Links
How do you talk about Mr President in front of your children?
"Mom, Donald Trump is a bully!"
Donald Trump calls breastfeeding lawyer ‘disgusting’
Next on Parent24
'Easily influenced by what they see': We asked local experts if Instagram Kids is a good idea

Read more on:
donald trumphillary clintonus 2016 electionsmanners
Events
FREE | Struggling with infertility? Join this Q & A and have your questions...