Dealing with anger in children 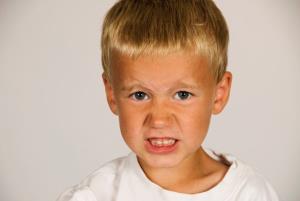 Anger is a fundamental emotion felt by all people. When it gets out of control however, anger is destructive. The natural way to express anger is to respond with aggression. It is the instinctive response to perceived physical or verbal threats, but responding aggressively in every threatening situation is not healthy.

In early childhood, children begin to master the ability to suppress physically aggressive impulses (pushing, hitting, pinching, biting, yelling) when they are angry. Preschool-aged children are learning to identify basic emotional states in themselves and others with the use of words. It is common to see young children resort to physically acting out (throwing toys, pushing or hitting a parent or peer) as they are still becoming accustomed to using words to exepress their feelings.

As children age, they develop more sophisticated language skills and begin to be able to take the perspective of others. They develop empathy and are better able to understand the effect their actions and words have on others. By the end of primary school, children should mostly be able to express angry feelings verbally as opposed to physically.

In order to effectively respond to angry or aggressive children, we need to have some ideas about what may have triggered an outburst. Anger may be a defense to avoid painful feelings or it may be associated with failure. It may be related to feelings of isolation or anxiety about situations over which the child has no control.

How parents respond to emotional situations has a significant effect on how well children learn to cope with their emotions. Teach children that all feelings are acceptable, but not all behaviour is acceptable. For example, it’s all right to feel frustrated, but it’s not all right to hit, kick or grab as a way of expressing that feeling.

Every time your child must deal with angry feelings is a teachable moment. If you noticed that your child remained calm during an anger-provoking situation, point out this observation and give him a lot of praise.

In dealing with angry children our actions should be motivated by the need to protect and to reach, not by a desire to punish. Parents and teachers should show a child that they accept his or her feelings, while suggesting other ways to express the feelings. It is not enough to tell children what behaviours we find unacceptable. We must teach them acceptable ways of coping.

Parents and teachers should be aware of the powerful influence of their actions on a child’s or group’s behaviour. Good discipline includes creating an atmosphere of quiet firmness, clarity, and conscientiousness, while using reasoning. Bad discipline involves punishment which is unduly harsh and inappropriate, and it is often associated with verbal ridicule and attacks on the child’s integrity.

A child about to use a toy or tool in a destructive way is sometimes easily stopped by an adult who expresses interest in having it shown to him. Be ready to show affection. Sometimes all that is needed for any angry child to regain control is a sudden hug or other impulsive show of affection.

You can ease tension through humor

Kidding the child out of a temper tantrum or outburst offers the child an opportunity to “save face.” However, it is important to distinguish between face-saving humor and sarcasm, teasing, or ridicule.

Occasionally a child may lose control so completely that he has to be physically restrained or removed from the scene to prevent him from hurting himself or others. This may also “save face” for the child.

Physical restraint or removal from the scene should not be viewed by the child as punishment but as a means of saying, “You can’t do that.” In such situations, an adult cannot afford to lose his or her temper and unfriendly remarks by other children should not be tolerated.

Limits should be clearly explained and enforced. Children should be free to function within those limits. Tell the child that you accept his or her angry feelings, but offer other suggestions for expressing them. Teach children to put their angry feelings into words, rather than fists.

Learning to cope with angry feelings is part of growing up

While some children easily learn to moderate their tempers, others may require more direct guidance and practice. If your child is having difficulty learning skills to calm themselves down when they are angry or has regular episodes where they are unable to stop themselves from being physically and/or verbally aggressive, your child may need the intervention of a mental health professional.

A handful of children will direct their angry impulses towards themselves and may engage in self-harming behaviour such as head banging, cutting and suicidal gestures. This requires immediate attention from a professional.

We live in a world where facts and fiction get blurred
In times of uncertainty you need journalism you can trust. For only R75 per month, you have access to a world of in-depth analyses, investigative journalism, top opinions and a range of features. Journalism strengthens democracy. Invest in the future today.
Subscribe to News24
Next on Parent24
'Easily influenced by what they see': We asked local experts if Instagram Kids is a good idea