By Jennifer Crocker
Share
Many years ago, ‘when dinosaurs roamed the earth’, as my son would say, my mom handed me a book called something like ‘What every girl should know’, a bulky package of Dr White’s sanitary towels and a sanitary belt. Yup, I was pre-pubescent just before stick on pads became all the rage.

I devoured the book from cover to cover and hid the bulky packages in my cupboard, right at the top where no one ever went.

Nothing happened for a while. I got my first training bras (Triumph in lemon and white) and put up with the horror of boys sliding their fingers down my back to see if I was wearing one. I washed them myself because I didn’t want to embarrass our domestic worker (don’t think it would have phased her that much, actually) and waiting for the red tide that would announce that I was a woman.

Eventually the great moment happened. Not in the privacy of my home, but in hospital where I had just had surgery on both my knees and was encased up to my thighs in plaster of Paris. I nervously told the dear sweet old lady (she was probably 30) who was sharing my room what had happened and a nurse came and presented me with some pads. I waited in quaking dread for my mom to arrive to share the news with her. Her response was prosaic, ‘have you got any cramps?’

‘Lucky you,’ she said and brought in my own pads.

I had joined the club, but being a good waspy family not a great deal was made of it.

The one thing that did change was that my mother upped my pocket money so that I could buy my own supplies. Which was great as it went up to R12, a fortune in those days.

Came the day that I ventured forth to the local supermarket to buy my first packet of non-Dr Whites I found myself in the aisle where the damn things were stored. New Freedom had hit the scene and I desperately wanted to get rid of the belt.

It took me over two hours to buy the things. I walked past them casually and slip my eyes up and down the shelves, I went off to look at the vegetables, I went back again and almost reached out, went off to check the frozen foods. This went on for a long time. In fact I am surprised I wasn’t had for being a potential shop
lifter. Eventually I bought them, saddled up my bike and rode home, convinced everyone could see the bright pink letter emblazoned on my foreheard.

Skip forward a few decades and I have two daughters on the brink of puberty. Casually they hopped in the car the other day and told me that the “lady from Lillets” had been around to give the Grade 6s a talk about periods, how to use their various products, what to expect and how young girls could use tampons.

A lively discussion ensued in the car about the relative merits of both. I told them the story of how I had decided tampons were a better idea than pads and had holed up in my mom and dad’s bathroom for about an hour with a jar of Vaseline until I managed to get one of the damn things in. Obviously (and this, dear reader, might be too much information) not far enough because I remember the ride to the local cinema on my trusty bike being rather painful. My mother tactfully never asked why an industrial size tub of Vaseline had vanished along with several tampons.

My daughters, on the other hand, were raring to go. Grace the pragmatic decided we need to go to Clicks to buy pads “just in case”. There was a discussion about the small pack Hannah had got filled with information and a pad and two teeny tampons, which she offered to give to me. Sadly I told her that after three children I thought they would fall out so she might as well keep them.

In the shop they spent ages looking at the packages and deciding which ones they wanted. They carried them to the till and I paid for them.

Of course I have spoken to my girls about periods before, they know what happens and so they were prepared. But I don’t hold any grudges against my mom for being a ‘70s mom who let us get on with it ourselves.

At least I know that they are prepared and unashamed. The next big test will be to see if we can get their brother to go in and buy them for us all... although that might be taking things a bit far.

Meanwhile I live in hope that menopause will hit me before their periods start so that we can afford to pay for all the protection that will be needed around the house.

How much do you talk about menstruation with your children, male and female?
Read more by Jennifer Crocker

We live in a world where facts and fiction get blurred
In times of uncertainty you need journalism you can trust. For only R75 per month, you have access to a world of in-depth analyses, investigative journalism, top opinions and a range of features. Journalism strengthens democracy. Invest in the future today.
Subscribe to News24
Related Links
‘I knew I’d conceived'
The parenting of politics
Smelly mom loses cool
Next on Parent24
Why art should be part of your child's routine 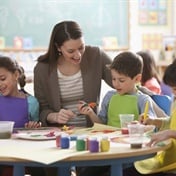