Amelia was diagnosed on her 7th birthday after her leg became swollen at a sports summer holiday club in August 2017.

A schoolgirl who beat bone cancer after surgeons performed a rare surgery that turned her foot into her knee has wowed medics and her family - by being more active than ever before.

Little Amelia Eldred loves dancing, trampolining, roller skating, bike riding and even playing football - despite at one point never knowing if she would even be able to walk again.

Amelia, from Tamworth, Staffs, has even danced so much that her prosthetic leg SNAPPED - and she was forced to order a replacement.

The nine-year-old was diagnosed with osteosarcoma in August 2017, which led to her having to have rotationplasty surgery – which is when the knee and part of the leg is amputated and the foot and heel joints re- attached back-to-front, to create a new knee joint.

Fast forward two years and the brave little girl has recovered from surgery, is in remission of her bone cancer and is living a more active lifestyle than most children her age.

She rides donkeys, dances, high lines, plays football, roller skates, goes on lengthy bike rides and jumps on trampolines, and does all of this with a prosthetic leg and a back-to-front foot where her knee used to be.

Amelia’s mum, Michelle, 46, a civil servant, said: “Amelia is a really amazing little girl, you would never of thought she had been through what she has done.

“She shows her leg off with pride, and never batted an eye at having to have the procedure done in the first place.

“We told her that rotationplasty was an option and Amelia made her decision after watching a girl on YouTube who had the same operation and is now a dancer Amelia said she wanted to be like her. “As she went into surgery, the last thing she said was ‘bye bye tumour, see you loser!’

“She is proud of her leg and proud to show it and explain what she has had done. She will challenge any unkind words as she feels it is her superpower.

“She was always such an active girl, she loves everything outdoors, she loves dance, athletics, sports and playing outside.

“It’s quite a controversial procedure that she had, you definitely double take at it if you have never seen it before because her foot is backwards.

“As a family, we knew that she had a much higher chance of a long and fulfilling life if the procedure went well.

“Because it went really well, she can do everything she loves, and now it’s even better because each activity is a new challenge for her.

“One thing we know for sure is that she’s too driven to let her prosthetic get in the way of everything she likes doing, and she proves it to us every single day.”

Amelia was diagnosed on her 7th birthday after her leg became swollen at a sports summer holiday club in August 2017. Michelle said: “She had an x-ray two weeks later after the swelling didn’t go down, where a tumour mass was found that had fractured her left femur.

“I can’t put into words how I felt that day, my world just stood still, to think my daughter was about to embark on such a terrible journey in hospital was horrific.

“We were then referred to Birmingham Children’s Hospital, had an MRI, scans and a biopsy, then started chemo in September 2017.”

In November 2017, the tumour was showing no signs of getting any smaller, and their only options were a full leg amputation, or rotationplasty, followed by four more cycles of chemo and six months of additional cancer drugs.

Michelle said: “In the end we decided on rotationplasty because it’s what Amelia wanted.

Rotationplasty is a procedure where the leg is amputated high up the thigh, then the lower leg is reattached the wrong way around, meaning that the heel will work as a knee joint and the foot slips into a prosthetic.

“We kept it together because Amelia did, she was so positive and so unfazed by what was happening it kept us calm.

“We have always tried to keep things as ‘normal’ as possible after the diagnosis and tell Amelia that she can achieve anything she puts her mind to. 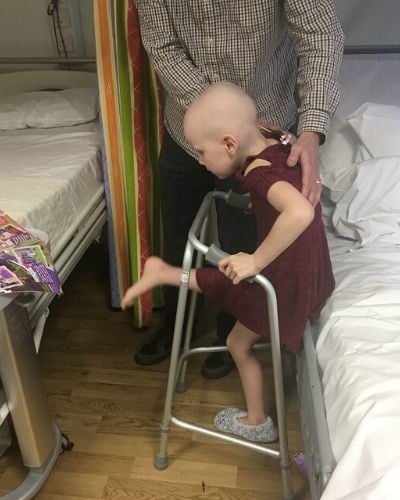 “We always encourage her to try new things and enjoy life to the full.”

Now, Amelia’s cancer is in remission and she has made a full recovery after her surgery and chemotherapy - although she will continue to have regular check-ups to make sure it stays that way.

She spends her weeks proving to herself that she can anything she sets her mind too and completes activities that most able-bodied children don’t.

Michelle said: “She’s just perfect, it has been such a difficult few years for us as a family, but she has just smiled throughout. “Looking back now we’re all so happy we opted for rotationplasty because now we see all of the things she can do as a result of it.

“She smiles and tells me that she can do anything if she works hard enough and also tells me that there ‘is nothing wrong with being different Mom, normal is boring!’

“We’re just to thankful that she’s ok, everything else is bonus."

Can you fall pregnant when you're already pregnant?

We live in a world where facts and fiction get blurred
In times of uncertainty you need journalism you can trust. For 14 free days, you can have access to a world of in-depth analyses, investigative journalism, top opinions and a range of features. Journalism strengthens democracy. Invest in the future today. Thereafter you will be billed R75 per month. You can cancel anytime and if you cancel within 14 days you won't be billed.
Subscribe to News24
Related Links
Heartwarming moment six-year-old’s classmates give him standing ovation after beating leukaemia
Local cancer survivor shares her miraculous pregnancy journey
Phumeza and Shota Mdabe speak out on their baby boy’s struggle with eye cancer and how they’ve...
Next on Parent24
Children's mental health and the digital world: how to get the balance right