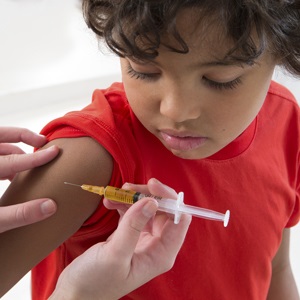 Rhett Krawitt is 6 years old and has been fighting leukaemia for 4 and half years. After numerous rounds of chemotherapy, last year he finally went into remission. But there's a new threat to little Rhett: measles.

With the recent measles outbreak at Disney it's suddenly a disease to worry about again. 59 cases have been reported and the number is continuing to grow. According to NPR "vaccination status is known for 34 of the California patients. State officials say that 28 were not vaccinated at all, one was partially vaccinated and five were fully vaccinated. Six of the unvaccinated were babies, too young to be vaccinated."

Because Rhett's immune system is still so weak from the chemotherapy he is unable to get his immunisations. He relies on herd immunity to keep him safe from communicable diseases. But in the county that he lives 6.45% of children have a "personal belief" exemption where they are still allowed to attend school without having been vaccinated.

Rhett's case is so sensitive that his father, Carl has asked his son's school to bar unvaccinated kids from attending the school. In a recent PTA meeting one of the teachers reminded parents not to send any food containing peanuts to school saying "It's really important your kids don't bring peanuts, because kids can die." Krawitt replied, "In the interest of the health and safety of our children, can we have the assurance that all the kids at our school are immunized?"And as you can imagine some parents were not impressed with his response.

I understand that there are parents who choose not to vaccinate their children, and while I don't agree with it at all, I'm not about to get into a fight with you about it. I've made my decision and I know that if my child does get the disease it will be a much milder version of it. But as Carl Krawitt says: "If you choose not to immunize your own child and your own child dies because they get measles, OK, that's your responsibility, that's your choice. But if your child gets sick and gets my child sick and my child dies, then ... your action has harmed my child." And that's not okay.

Disclaimer: The views of columnists published on Parent24 are their own and therefore do not necessarily represent the views of Parent24.
Do you believe in vaccinating your children?

We live in a world where facts and fiction get blurred
In times of uncertainty you need journalism you can trust. For only R75 per month, you have access to a world of in-depth analyses, investigative journalism, top opinions and a range of features. Journalism strengthens democracy. Invest in the future today.
Subscribe to News24
Related Links
Vaccinating young kids
Don't hesitate vaccinate!
Could your kid get measles?
Next on Parent24
WATCH | Animated educational video reminds kids how to protect against coronavirus (in isiZulu, Sesotho and English)