What if the princess didn't marry Prince Charming but instead went on to be an astronaut? What if the jealous step sisters were supportive and kind?

And what if the queen was the one really in charge of the kingdom? Illustrated by sixty female artists from every corner of the globe, Good Night Stories for Rebel Girls introduces us to one hundred remarkable women and their extraordinary lives, from Ada Lovelace to Malala, Elizabeth I to Serena Williams.

Empowering, moving and inspirational, these are true fairy tales for heroines who definitely don't need rescuing. 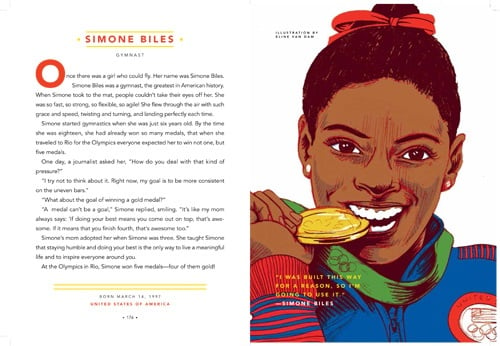 When we got this book to review, we were doing cartwheels at the office. Cartwheels! I've been coveting this book since it was but a Kickstarter dream and I was really chuffed to add it to my children's library.

They say you should never judge a book by it's cover, but I'm not going to lie, I 100% do and the cover of this book is beautiful. And it carries through to all the illustrations by the 60 different illustrators commissioned. I love how diverse and inclusive this book is with regard to race, religion and occupation.

From supermodels and activists to scientists and F1 drivers, there are women from ancient times right up to women who are still gracing us with their presence. Basically showing children that women can be anything they want to be. Notice how I say children and not girls, because boys can benefit from this narrative too. My son is the one that actually requests to read this most often but to be honest my daughter is only 8 months old and can't verbalise any requests yet. I also like the way the stories are told, they're all one page long and get the main points across so they're not too complicated for little ones but have enough info for older kids.

These aren't long stories, they're one page each but it's a nice way to expose your kids to many different women doing many different things. It can also be used as a springboard for learning about someone who piques your interest. And to be honest, I'm learning a lot too. For instance, I didn't even know there was a woman F1 driver!

Goodnight Stories for Rebel Girls is available at all leading bookstores for R385.

We're giving away two copies of this amazing book so head over to our competition page to enter the competition!

We live in a world where facts and fiction get blurred
In times of uncertainty you need journalism you can trust. For only R75 per month, you have access to a world of in-depth analyses, investigative journalism, top opinions and a range of features. Journalism strengthens democracy. Invest in the future today.
Subscribe to News24
Next on Parent24
Why is my 9-year-old still wetting the bed? How to treat and prevent nightly mishaps