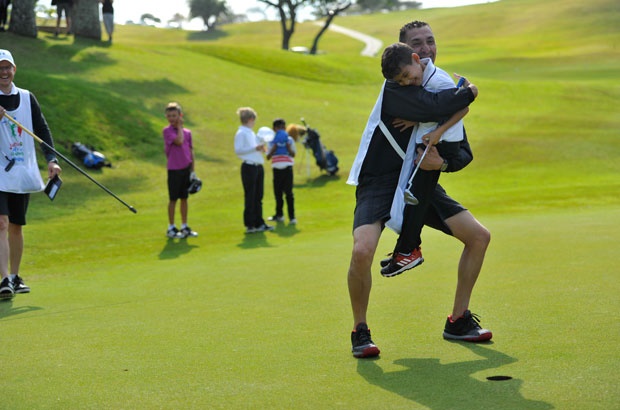 Not only did Traigh start playing at a similarly young age, hitting his very first ball while only a toddler, the golf prodigy played his first South African tournament at 4, and his first international tournament, the Junior Africa Challenge, at 7 – where he came ended in third place.

Traigh went on to place eighth at the Kids Golf World Championship in Malaysia last December, and since then has been touted as one to watch by the international golfing community.

Needless to say, the little boy is on a fast track to becoming SA’s next young golfing star with the upcoming two years already mapped out, including plans to take on the Australian, European and US Kids golfing tournaments. So where does the youngster get his talent from?

“It was definitely something he picked up from the family. We stayed with his grandparents who both played golf daily at Rondebosch Golf Course and looked after Traigh,” says mom Tiara Pathon, who adds that she also planted little seeds of encouragement in Traigh’s ears as a baby. "'You are the best golfer in the world’, ‘Who’s the best golfer in the world?’ to make Traigh believe this. And it’s worked,” she told Parent24.

Sport is big on both sides of the family, with dad David van Schalkwyk being a former professional soccer player (and currently, caddie to his son), and uncle Jerome Pathon a former American footballer. Older sisters Ammaarah is a ballet dancer, and middle sister Tara plays soccer.

Despite this, the family was surprised at what their child has accomplished, "I don’t think any of us realised actually how talented he is until he played the Junior Africa Challenge in San Lameer [Durban] last year August. He has overachieved since then and keeps surprising us. He doesn’t win every tournament but that’s not a bad thing as it teaches him good sportsmanship and how to work hard for what you want," the proud parents revealed. Traigh trains twice a week and play local competitions three times a month. But for all he has achieved, the wunderkind leads a very normal life. "Traigh loves school... and does well academically – his favourite subject is maths," say his folks.

"He also does everything kids do – plays marbles and hide and seek with his friends. He loves playing golf on his Play Station."

It's obvious that the entire family are dedicated to seeing Traigh succeed, and admits that keeping up with the financial side of things can be tricky.

"Golf is an expensive sport – we can’t always afford it but we try and keep up with what we can. Since he started playing we'd bought him second-hand clubs. Last Christmas we bought him his first new set after saving for a while."

The sponsorships are also noticing: Turkish Airlines sponsored their trip to the U.S. Kids Golf European Championship in Scotland, which took place from 29-31 May. Traigh once again impressed and was tied for 9th place, had an overall of 1 under par for the 3-day tournament. A score that was just 6 shots from 1st place! When asked about giving advice to parents with kids who are really dedicated to a sport or other passion, the parents had this to say:

"Nurture their talent and support them to be the best they can be. If it’s forced they will lose interest, so keep it fun and make sure they are enjoying it. Emotionally it can take a toll, so positivity is key. We're lucky with golf that today’s great golfers don’t always win every competition, and we watch all the golf tournaments to show Traigh how important every shot is and how it can make a difference."

Share your child's talents or achievements with the Parent24 team by emailing to chatback@parent24.com and we could publish your story.

We live in a world where facts and fiction get blurred
In times of uncertainty you need journalism you can trust. For 14 free days, you can have access to a world of in-depth analyses, investigative journalism, top opinions and a range of features. Journalism strengthens democracy. Invest in the future today. Thereafter you will be billed R75 per month. You can cancel anytime and if you cancel within 14 days you won't be billed.
Subscribe to News24
Related Links
10-year-old swimmer hopes to raise R2 million for Red Cross hospital in the upcoming Freedom Swim
8-year-old boy with a disability becomes successful wheelchair model
This 4-year-old boy actually read 100 books in one day
Next on Parent24
WATCH | 'We had to spend thousands': The funny reason Chrissy Teigen isn't a tooth fairy parent