IN PICS: From Russia, with love: stunning pics of kids playing soccer Local children play football on dirt pitches in a Soweto township on June 7, 2010 in Johannesburg, South Africa. The 2010 FIFA World Cup kicked off in South Africa on 11th June. (Photo by Cameron Spencer)

It’s been 8 years now and I still get nostalgic about walking through the streets of Cape Town's city centre and seeing entire families kitted out head-to-toe in all sorts of colours, walking along the fan walk to Green Point Stadium. I remember sitting in massive auditoriums with the most exhilarating atmosphere to watch the big games with people I would never have met otherwise, and I’ll never forget cheering along and breaking out in song every time Ronaldo scored one for Portugal. The 2010 Fifa World Cup was the most exciting and memorable time for many South Africans and I can’t help but wish I was in Russia for the 2018 games right now.

To be honest, it doesn’t really matter where we are – the excitement of the 2018 Fifa World Cup will have us coming together, whether it’s having a family braai to root for our favourite teams or playing soccer on the streets with friends. A young boy playing football in Hout Bay, Cape Town, South Africa around a puddle in the middle of a dirt pitch. (Photo by AMA/Corbis via Getty Images)

So in honour of the 2018 Fifa World Cup we thought we’d celebrate the sport that always seems to bring us together. From Russia, with love for the game, here’s a series of beautiful pictures of kids playing soccer around the world: 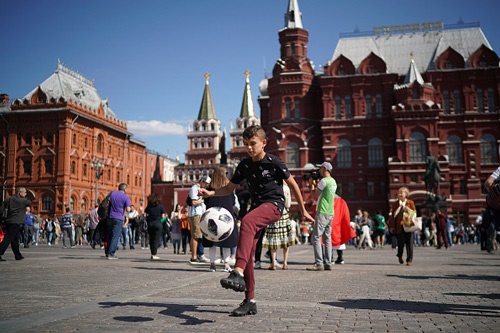 A young boy plays football and joins in the fun atmosphere of The World Cup near Red Square on June 15, 2018 in Moscow, Russia. Russia won the opening game of the tournament against Saudi Arabia 5-0. (Photo by Christopher Furlong/Getty Images) Children play soccer in front of the graffiti mural of the striker Gabriel Jesus of the Brazilian soccer team, on June 12, 2018 in São Paulo, Brazil. The painting was done by a group of artists to pay homage to the attacker who grew up in the area, the Jardim Peri neighbourhood that is one of the poorest neighbourhoods in the city of São Paulo. (Photo by Victor Moriyama/Getty Images) Boys play with a ball before the Group E match between Racing Club and Cruzeiro as part of Copa Conmebol Libertadores 2018 at Juan Domingo Peron Stadium on February 27, 2018 in Buenos Aires, Argentina. (Photo by Agustin Marcarian/Getty Images) Indonesian boys wear Indonesian corruptor mask to compete for a ball as they're playing mud soccer during the 7nd Indonesia National Independence day celebration in Yogyakarta, Indonesia on August 6, 2017. The Indonesian Independence day is commemorated every August 17th. (Photo by Nugroho Hadi Santoso/NurPhoto via Getty Images) A boy plays soccer in front of a mural of legend, Diego Armando Maradona, hand painted on wall with spray cans. (Photo by Paolo Manzo/NurPhoto via Getty Images) Muradil is celebrating with his teammate for scoring a goal on March 20, 2016. Meizhou of Guangdong Province is the hometown of soccer, and R & F Soccer School is a school that aims at “training a new generation of soccer king” and also the second largest soccer school in Guangdong Province. The school recruits small Uighur players from Xinjiang, and provides opportunities of learning soccer free for a vast majority of the small players. (Photo by Yuyang Liu/Getty Images) Young boys play soccer in the small village of Khuza, East Khan Yunis on April 11, 2016 in Gaza City, Gaza. Their homes were destroyed in major conflict in 2014. This year marks ten years since the beginning of the blockade on the Gaza strip. (Photo by Darrian Traynor/Getty Images) Uyghur students are celebrating a goal. June 4, 2016. Meizhou of Guangdong Province is the hometown of soccer, and R & F Soccer School is a school that aims at “training a new generation of soccer king” and also the second largest soccer school in Guangdong Province. The school recruits small Uighur players from Xinjiang, and provides opportunities of learning soccer free for vast majority of the small players. (Photo by Yuyang Liu/Getty Images) Adam Lallana of Liverpool's children playing on the pitch during the Premier League match between Liverpool and Middlesbrough at Anfield on May 21, 2017 in Liverpool, England. (Photo by Robbie Jay Barratt - AMA/Getty Images) Children play soccer in a downtown playground in front of the CN Tower in Toronto, Canada on May 6, 2017. (Photo by Gary Hershorn/Getty Images) A boy plays football on the shores of the Pacific Ocean in Kashima in the Ibaraki Prefecture. (Photo by Matthew Ashton/EMPICS via Getty Images) 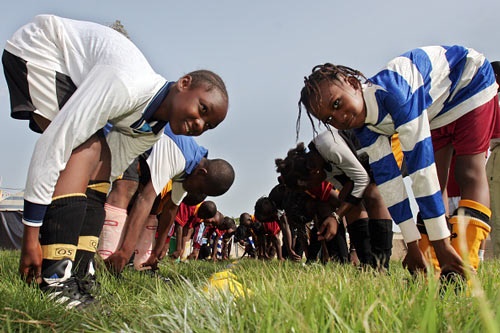 The children of AMPO orphanage do a warm up session before playing a game of get the cone with coaches from the Coaching For Hope project. Coaching for Hope is a project to raise awareness of HIV and AIDS through football. | Location: Ougadougou, Burkina Faso. (Photo by In Pictures Ltd./Corbis via Getty Images) Children play football in the street as they make their way to the MCG to attend the International Champions Cup match between Real Madrid and Manchester City at the Melbourne Cricket Ground on July 24, 2015 in Melbourne, Australia. (Photo by Scott Barbour/Getty Images) Boys play football in front the Palazzo di Giustizia courthouse as media members wait for the final verdict of the Amanda Knox and Raffaele Sollecito murder retrial on March 27, 2015 in Rome, Italy. The final verdict is assumed to be announced today. The court reinstated on January 31, 2014 in Florence the guilty verdicts against Amanda Knox and Raffaele Sollecito for the murder of UK student Meredith Kercher in 2007. The verdict overturns Knox and Sollecito's successful appeal in 2011 which released them after four years in jail. Meredith Kercher was murdered in her bedroom on November 1st, 2007 in Perugia. (Photo by Franco Origlia/Getty Images) A boy and girl play football in the Chacara do Ceu favela, or shantytown, on November 2, 2013 in Rio de Janeiro, Brazil. The favela was previously controlled by drug traffickers and is now occupied by the city's Police Pacification Unit (UPP). Football is a very popular pastime played throughout the shantytowns of Rio and all over Brazil. The UPP are patrolling Rio's favelas amid the city's efforts to improve security ahead of the 2014 FIFA World Cup and 2016 Olympic Games. (Photo by Buda Mendes/Getty Images) A young boy plays football in a Favela on June 7, 2013 in Rio de Janeiro, Brazil. (Photo by Laurence Griffiths/Getty Images) Two Marcelline nuns play a football match with boys involved in the Intercampus project at the end of a practice session on April 17, 2010 in Queretaro, Mexico. Since 1997, Inter Campus has implemented a flexible and long-term social cooperation programme in 25 foreign countries, assisted by 200 local instructors. The aim of the programme is to use the game of football as an educational tool to restore the right to play to 10 000 needy children. (Photo by Franco Origlia/Getty Images) Afghan children play soccer in front of the ruined Darul Aman Palace on November 8, 2012 in Kabul, Afghanistan. The Darul Aman, built in the 1920s, is a palace, which was set on fire during the Communist coup of 1978. It was damaged again as rival Mujahedeen factions fought for control of Kabul during the early 1990s. (Photo by Daniel Berehulak/Getty Images) 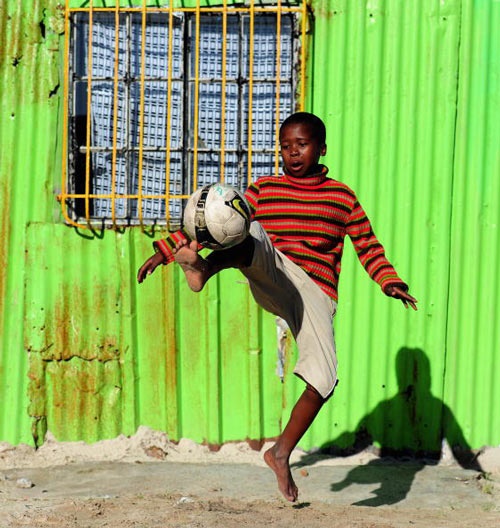 Young four and five-year-old children play a friendly game of soccer underneath colourful hanging paper lanterns at the Chogye Temple on May 15, 2010 in Seoul, South Korea. The game is known as the Little Monk Soccer Match and is part of the celebration surrounding '21 Days of Little Monk' which honours Buddha's birthday as well as the then upcoming FIFA 2010 World Cup. (Photo by Chung Sung-Jun/Getty Images) A young boy plays soccer on a dump in a Somali refugee camp on December 12, 2008 in Djibouti. The African town Djibouti is the starting point for the German frigate Karlsruhe. (Photo by Carsten Koall/Getty Images) Children play football in the street as a spectacular sunset brightens up the sky on October 23, 2006 in London, England. According to the Met Office, it has been the warmest extended summer period on record with the first half of October seeing temperatures about 3 degrees celcius above average. (Photo by Scott Barbour/Getty Images)

What do you remember most about the Fifa World Cup in South Africa? Tell us by emailing chatback@parent24.com and we may publish your comments on the site.

We live in a world where facts and fiction get blurred
In times of uncertainty you need journalism you can trust. For only R75 per month, you have access to a world of in-depth analyses, investigative journalism, top opinions and a range of features. Journalism strengthens democracy. Invest in the future today.
Subscribe to News24
Related Links
What your favourite soccer stars named their children
Instead of telling his son to toughen up, this dad taught his little man the importance of never...
David Beckham enjoys being a stay-at-home dad – and we have proof!
Next on Parent24
WATCH | Talented 11-year-old's football trick shots go viral

Read more on:
2018swc
Events
WATCH | 'He died at the school': Local experts unpack the issue of school bullying