Star Wars' John Boyega surprises school kids in PT class, shows them how to 'Train Like A Jedi' 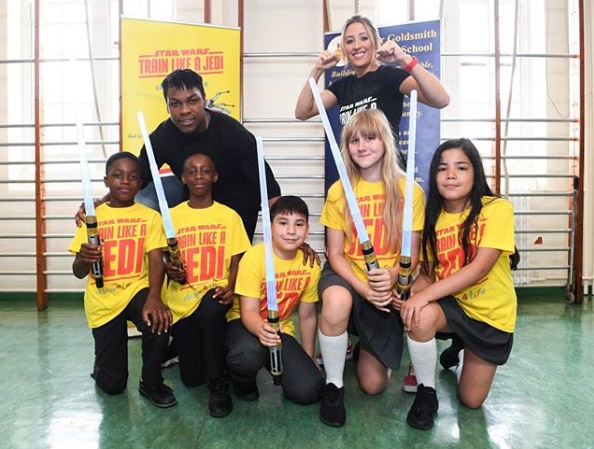 Much has been said about the importance of physical activity among children. The rate of childhood obesity is rising, urbanisation means kids often have less space to run around in, and our kids seem to have lost interest in the real world outside of their smart phones.

Also see: INFOGRAPHIC: Obesity is the nr 1 lifestyle disease in SA: Here's how to protect your family

Busy bodies actually help kids to learn better. The British Journal of Sports Medicine reported on a 2016 study by the University of Exeter, which showed that "a single session of moderately energetic physical activity has immediate positive effects on brain function, intellect, and academic performance."

Science Daily quotes Professor Craig Williams, Director of the Children's Health and Exercise Research Centre, Sport and Health Sciences at Exeter. "Over the 30 years we have been researching the health and well-being of young people, we have seen the accumulation of paediatric data across physiological, psychological, environmental and social issues." He stressed the importance of enhanced physical activity, "not just in schools but sports and recreational clubs, with the family, and even for those children with long-term illness. At all levels of society we must ensure that enhanced physical activity is put into practice."

But how do schools get all the kids, including the least sporty ones, to look forward to PT class and even inspire them to get sporty after hours?

Public Health England launched a national programme, Change4Life, to do just that. Partnering with Disney UK, they use Star Wars and its characters to spark excitement among the kids by showing them how to Train Like a Jedi.

So not only do I do taekwondo, I have now learned to #TrainLikeAJedi, with @change4lifeuk @DisneyUK Today I visited Oliver Goldsmith Primary School with @JohnBoyega to inspire the kids to be active, get moving and #TrainLikeAJedi

Perhaps they'll look forward to PT class next week... and who knows, some may even be inspired to see exercise in a different light (saber?) from now.

How do your kids feel about exercise in general, and PT class specifically? What do you think schools and parents can do to get our kids physically fit and enthusiastic about physical activity? Send your comments to chatback@parent24.com and we may publish them.

We live in a world where facts and fiction get blurred
In times of uncertainty you need journalism you can trust. For only R75 per month, you have access to a world of in-depth analyses, investigative journalism, top opinions and a range of features. Journalism strengthens democracy. Invest in the future today.
Subscribe to News24
Next on Parent24
WATCH | Talented 11-year-old's football trick shots go viral

Read more on:
exercise
Events
WATCH | 'He died at the school': Local experts unpack the issue of school bullying