Well-known television actress Chantal Stanfield and director Megan Furniss once again team up to bring the sequel to their hugely successful and uniquely South African comedy, From Koe'siestes To Kneidlach – With Kids!, to the Baxter Golden Arrow Studio from 22 December 2020 to 9 January 2021 at 20:15.

Written and performed by Stanfield (Getroud Met Rugby, Binnelanders) with music compiled by RJ Benjamin and produced by Kizara Kreative, this hilarious kosher comedy follows the bizarre, funny and true story of what happens when a girl from the Cape Flats falls in love with a Jew-ish boy from Joburg's East Rand.

She finds herself smack-bang in the middle of culture, heritage and traditions, vastly different from her own, while she shares and celebrates her very colourful background too.

From Koe'siestes To Kneidlach – With Kids! picks up a few years after the mixed-race-mixed-everything happy couple gets married and ride off into the Shabbat sunset. 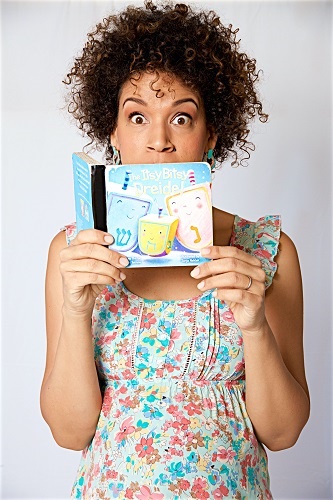 Now there's a 'beige' baby on the way with a myriad of cultural, religious and familial issues to navigate – from the minefield of beautiful names and their unfortunate companion nicknames from the Flats; a proud bossiekop dealing with her child's gladde hare (straight hair); celebrating Christmas and Hannukah while explaining barakat to the Jewish in-laws – to how to avoid getting mistaken for the nanny.

Along the way, audiences will meet interesting characters like the omnipresent voice of her mother, her gay best friend and nosy neighbours and several others. The journey between these two cultures, experiences and backgrounds is best illustrated in the metaphoric title From Koe'siestes to Kneidlach.

Koe'siestes are a traditional Cape Malay soft, sticky doughnut, lightly spiced with aniseed and cinnamon, dipped in syrup and covered with desiccated coconut. Kneidlach, also known as matzah balls, are dumplings made of matzah meal, eggs, water and fat, usually served in chicken soup, enjoyed as a staple on the Jewish Passover.

The mash-up of these two very different traditional delicacies make for perfect entertainment as Stanfield reminisces on love, life and examines everyone's cultural biases and issues.

The original production From Koe'siestes To Kneidlach premiered to great success in 2017 at the Theatre on the Square in Johannesburg, followed by a four-week season at The Baxter.

The media raved with The Star writing "…the narrative is so beautifully written that Stanfield has little trouble feeding the imagination of the audience" and My View saying, "… her first-person narrative in this true story [is] alternatively funny, deeply empathetic and critical… a joy from beginning to end." The Jewish Report agreed, "to hold the attention of an audience as a solo performer for an hour is no mean feat … Adroitly directed by Megan Furniss… a fun night out and an entertaining theatrical diversion."

All performances will be limited to fifty per cent capacity, with Covid-19 protocols in place as regulated at Level 1 during the national state of disaster. These will include the availability of hand sanitisers, tracking and tracing recorded, wearing of masks and physical distancing.

Patrons and audience members are advised to arrive at least an hour before the start of the performance to avoid delays. From Koe'siestes To Kneidlach - With Kids! runs at the Baxter Golden Arrow Studio from 22 December 2020 to 9 January 2021 with no performances on Christmas Eve, Christmas Day and New Year's Day.

Ticket prices range from R80 to R150 with discounted block bookings and student and pensioner prices at R110. Booking is through Webtickets on 086 111 0005, online at www.webtickets.co.za or at Pick n Pay stores.

Submitted to Parent24 by the Baxter Theatre Centre

We live in a world where facts and fiction get blurred
In times of uncertainty you need journalism you can trust. For 14 free days, you can have access to a world of in-depth analyses, investigative journalism, top opinions and a range of features. Journalism strengthens democracy. Invest in the future today. Thereafter you will be billed R75 per month. You can cancel anytime and if you cancel within 14 days you won't be billed.
Subscribe to News24
Related Links
'My best friend the butternut': Can children's comfort objects go too far?
Here’s how local non-profit organisations are bringing the joy of reading to South African children
The most wonderful time of the year: A parent's guide to a merry Christmas
Next on Parent24
Locals encouraged to tell their homegrown stories to ignite a love for reading

Read more on:
kidsfamilyparenting
Events
Locals encouraged to tell their homegrown stories to ignite a love for reading