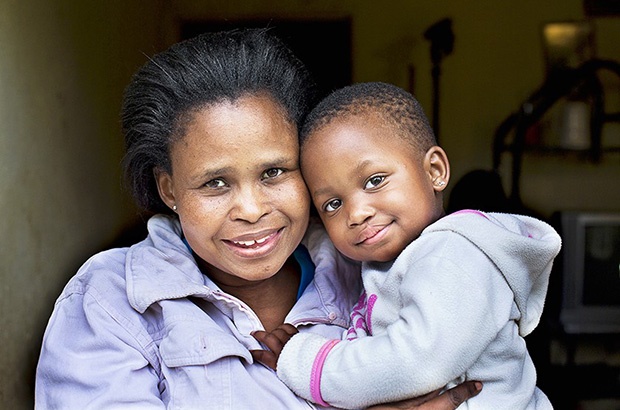 Olga with her daughter, Lungile, who received the 45-minute surgery through Operation Smile to correct her cleft lip.

Every three minutes, somewhere in the world, a child with a cleft lip or left palate is born.

One in every thousand babies born in Africa is born with a cleft palate or cleft lip.

But 2 billion people globally lack access to any surgical care to fix this, and only 4% of surgeries go to the poorest third of the global population. That leaves many children who do not receive reconstructive surgery, and who often suffer hearing loss, have difficulty breathing, speaking, eating and drinking, and subsequently suffer from malnutrition and other medical and psychological problems.

That’s where Operation Smile comes in.

This non-profit organisation was founded in the USA in 1982 and established itself with its first medical mission in South Africa in 2006. They provide free surgeries to repair cleft lip, cleft palate and other facial deformities in disadvantaged communities, and rely solely on qualified volunteers, including physicians, plastic surgeons, nurses, dentists, speech therapists, registry clerks and other medical and non-medical professionals to ensure that each medical mission is fully equipped and resourced.

Because quite simply, every child has the right to smile.

We spoke to Sean Robson, from Operation Smile South Africa, who told us all about Lungile and Tebatso, two past patients whose lives have been changed forever by the organisation.

There seems to be a stigma around those with cleft lip and cleft palate. So much so that Olga, mom to little Lungile, often found her community in Mpumalanga confused, even afraid, when her daughter, born with cleft lip, was around people other than family and friends. “People used to ask what was wrong with Lungile. We told them that she was born like this but when they asked, it made us feel bad,” explained Tebogo, Lungile’s older brother.

In 2015, Olga and Lungile were welcomed into the Operation Smile family and after a successful surgery, Lungile, once shy and withdrawn, had a completely new outlook on life. “Lungile loves to dance hip-hop, listen to Rihanna and play her brother’s musical instruments,” says Olga. And as for mom herself? “I used to be so stressed and thin. Now I am fat.” Lungile was born with a cleft lip.

Lungile, who received the 45-minute surgery through Operation Smile to correct her cleft lip in 2015, smiles a beautiful smile with her mother Olga.

Tebatso Magoro was also born with a cleft lip and, as a toddler, when word got out about a little boy with a facial deformity in their little Limpopo community, people reacted negatively. According to Ms. Makamela, a member of the community who went on to help Tebatso, children were particularly afraid of the little boy, and teachers eventually asked Tebatso’s mom to keep him home because he was making others uneasy.

This only made Tebatso volatile, angry and unhappy. The whispers and stares became a little too much for the then 4-year-old boy, who pressed Ms. Makamela to get him help through the organisation. So in 2009, Tebatso got his smile back. Tebatso was born with cleft lip. Here, he stands holding an image before his reconstructive surgery.

"Tebatso has blossomed into a well-spoken young man who likes nothing better than to play soccer with his older cousins and dreams of one day serving his community as a policeman," writes Sean Robson. "When he is shown a picture of himself before the surgery he doesn’t seem to recognise himself."

Ms Makamela is just one of the many volunteers, dedicating their lives to making children smile. Another is Leila Amien.

Leila Amien has been with Operation Smile since 2014, and while completing her studies, the 5th year medical student has already started making a difference, putting a smile on so many faces wherever she can.

She’s attended the Operation Smile International Leadership Conference and the Medical Mission to the Democratic Republic of Congo, and she has participated in numerous society activities to raise awareness of cleft lip and cleft palate, and to raise funds for corrective surgeries.

One such event is the Operation Smile five-a-side charity soccer tournament.

Leila explains, “It takes 45 minutes to perform one surgery to put a smile on the face of a child with a cleft lip or cleft palate – the same time it takes for one half of a professional football match.”

With three soccer tournaments under her belt, Leila has managed to raise R350 438, paying for 63 smiles, to be exact, at the cost of R5 500 each. This year she hopes to raise enough money to ensure 30 new smiles. On 29 September, Leila will be hosting another tournament at the Fives Futbol Courts at Century City. There will be 32 teams, 8 players (5 players with 3 subs), with players having to be 16 and over.

Entry fee will be R800 per team and to enter, teams must contact Leila Amien at leila.amien@gmail.com.

While there are prizes to be won, all proceeds will be donated to Operation Smile, and this includes that from corporate sponsors.

Whether you’re playing or not, it’s an event you won’t want to miss. And you can make a day out of it too, with plenty of food on sale and a lively atmosphere that’s sure to make you miss those 2010 World Cup days.

We live in a world where facts and fiction get blurred
In times of uncertainty you need journalism you can trust. For only R75 per month, you have access to a world of in-depth analyses, investigative journalism, top opinions and a range of features. Journalism strengthens democracy. Invest in the future today.
Subscribe to News24
Next on Parent24
'Powerfully emotional': The story of the boy born with his organs 'protruding from his body'