“My little FUPA and I feel like we are meant to be": Beyoncé reveals even the queen's post-baby body isn't what it used to be 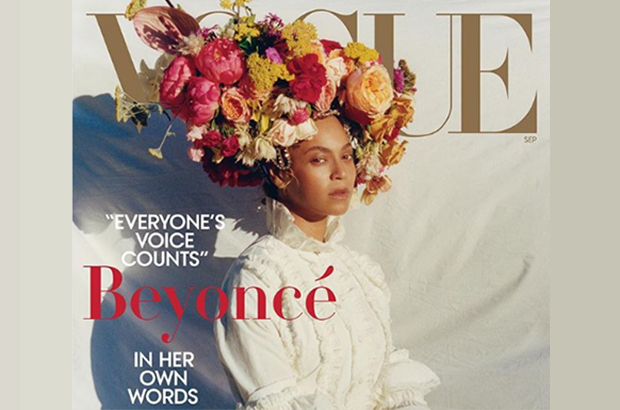 As women, lovers and mothers, we’re constantly trying to do our very best for the people we love. We're striving to shatter glass ceilings strategically placed to box us in and hold us down, forcing our bodies into skin-tight, tapered jeans that no longer fit like they did at 18, or pushing our bodies just a little further after it miraculously grew a full new life. But as strong as we are, and as exceptional as God has undoubtedly made our bodies, much like Beyoncé, we weren’t built in a day.

So even our (should-be) leader of the free world, the queen mother herself, admits to feeling the “crazy” pressure of the world on her shoulders. She revealed all in the latest issue of British Vogue, in her own words as told to Clover Hope, and the cover photo was shot by 23-year-old Tyler Mitchell – the first African American photographer to ever shoot a Vogue cover.

What we love most was her admission that Beyoncé is embracing her post-baby body.

“After the birth of my first child, I believed in the things society said about how my body should look," she said. "I put pressure on myself to lose all the baby weight in three months, and scheduled a small tour to assure I would do it. Looking back, that was crazy.

“I was still breastfeeding when I performed the Revel shows in Atlantic City in 2012. After the twins, I approached things very differently.”

This is as much about forming firsts as it is about leaving legacies. Here’s @beyonce by me for the September 2018 issue of American Vogue. Honored to have worked with such an icon.

The mother of three went into detail, explaining the complications during the birth of Rumi and Sir:

“I was 218 pounds [99kg] the day I gave birth to Rumi and Sir. I was swollen from toxemia [pre-eclampsia] and had been on bed rest for over a month. My health and my babies’ health were in danger, so I had an emergency C-section. We spent many weeks in the NICU… I was in survival mode and did not grasp it all until months later. Today I have a connection to any parent who has been through such an experience.

“After the C-section, my core felt different," she continued. "It had been major surgery. Some of your organs are shifted temporarily, and in rare cases, removed temporarily during delivery. I am not sure everyone understands that. I needed time to heal, to recover."

Beyoncé then describes her recovery.

“During my recovery, I gave myself self-love and self-care, and I embraced being curvier. I accepted what my body wanted to be. After six months, I started preparing for Coachella. I became vegan temporarily, gave up coffee, alcohol, and all fruit drinks. But I was patient with myself and enjoyed my fuller curves. My kids and husband did, too.

I think it’s important for women and men to see and appreciate the beauty in their natural bodies. That’s why I stripped away the wigs and hair extensions and used little makeup for this shoot.”

Other celebs have also embraced their raw beauty, with Christina Aguilera, for one, also having posed for Paper magazine, stripped of all makeup. Explaining the look she said, "I'm a performer, that's who I am by nature. But I'm at the place, even musically, where it's a liberating feeling to be able to strip it all back and appreciate who you are and your raw beauty."

And we can't ignore Chrissy Teigen's honesty when it comes to her body. After just giving birth to her baby boy, Miles, a little under 3 months ago, the former model also opened up on Twitter writing, "Instagram is crazy. I think it’s awesome people have killer bodies and are proud to show them off (I really do!!) but I know how hard it can be to forget what (for lack of a better word) regular ol’ bodies look like when everyone looks bonkers amazing."

She continued, "Also I don’t really call this “body confidence” because I’m not quite there yet. I’m still super insecure. I’m just happy that I can make anyone else out there feel better about themselves!"

Local celeb Roxy Burger has also commented on Instagram's power over us. Five months post-partum, she posted a picture with her gorgeous girl, Adrienne, along with her belly which she says is still "flabby AF" and wrote, "People are literally killing themselves over #TheGramSham – a snapshot of a fabulous life we think we should have. Or how we should look. Don’t forget: Instagram is literally a snapshot. It’s not the full picture. Love yourself! You’re doing a great job."

This is me 5 months postpartum. I manage to wash my hair maybe twice a week, dry-shampoo is my best friend, I’m getting limited sleep, my belly is still flabby AF, my boobs are riddled with stretch-marks and if I’m completely honest I’m struggling to balance work and Mom life. It’s tough. The reason I’m sharing this? Because it’s an honest reflection of motherhood and my current life. My friend @thejolurie posted some pretty epic words and challenged us to post something authentic on #YouthDay. Why? Because people are literally killing themselves over #TheGramSham - a snapshot of a fabulous life we think we should have. Or how we should look. Don’t forget: Instagram is literally a snapshot. It’s not the full picture. Love yourself! You’re doing a great job.

The flabby tummy is real, it's a thing and it's okay!

So in her interview Beyoncé also admits to having, and loving, her little FUPA (that Fat Upper Pubic Area you probably didn’t even know had a name that you get after having a baby) and every single one of her signature curves that are now all the more, I’m gonna say it, bootylicious.

“To this day my arms, shoulders, breasts, and thighs are fuller. I have a little mommy pouch, and I’m in no rush to get rid of it. I think it’s real. Whenever I’m ready to get a six-pack, I will go into beast zone and work my ass off until I have it.

But right now, my little FUPA and I feel like we are meant to be.

There are many shades on every journey. Nothing is black or white. I’ve been through hell and back, and I’m grateful for every scar. I have experienced betrayals and heartbreaks in many forms. I have had disappointments in business partnerships as well as personal ones, and they all left me feeling neglected, lost, and vulnerable.

Through it all I have learned to laugh and cry and grow. I look at the woman I was in my 20s and I see a young lady growing into confidence but intent on pleasing everyone around her. I now feel so much more beautiful, so much sexier, so much more interesting. And so much more powerful.”

"I look at the woman I was in my 20s and I see a young lady growing into confidence but intent on pleasing everyone around her," says @Beyonce in our September issue cover story. "I now feel so much more beautiful, so much sexier, so much more interesting. And so much more powerful." Inspired by @Beyonce's words, 11 women share the advice they would give their 20-something selves; tap the link in our bio to read. Photographed by @tylersphotos, fashion editor @tonnegood, Vogue, September 2018.

So yes, it's important to know that even Sasha Fierce herself, when it comes to motherhood and all its many challenges, isn't always grindin' til she owns it or slaying, trick.

In fact, in her own words – say it out loud and consider it a mantra:

“I am accepting of who I am. I will continue to explore every inch of my soul and every part of my artistry.”

How do you feel about your post-baby body now? Did you too feel pressure to get back to the way you looked before you had kids? How did you rise above society's expectations? Tell us your story by emailing chatback@parent24.com and we may publish it on the site.

Sign up to our weekly newsletter to receive Parent24 stories directly to your inbox.
We live in a world where facts and fiction get blurred
In times of uncertainty you need journalism you can trust. For 14 free days, you can have access to a world of in-depth analyses, investigative journalism, top opinions and a range of features. Journalism strengthens democracy. Invest in the future today. Thereafter you will be billed R75 per month. You can cancel anytime and if you cancel within 14 days you won't be billed.
Subscribe to News24
Related Links
Dad dons skin-tight leotard and dances to Beyoncé’s Single Ladies with his daughters
After watching this Beyoncé and Jay-Z video, you’ll wish you were part of the Carter family too!
Babymoon like Beyoncé
Next on Parent24
Who is liable when resource shortages harm mothers and children in public hospitals?

Read more on:
beyoncépost-baby bodytwinspre-eclampsia
Events
Sasol is looking for bursars for an all-inclusive bursary for 2023 - Apply now