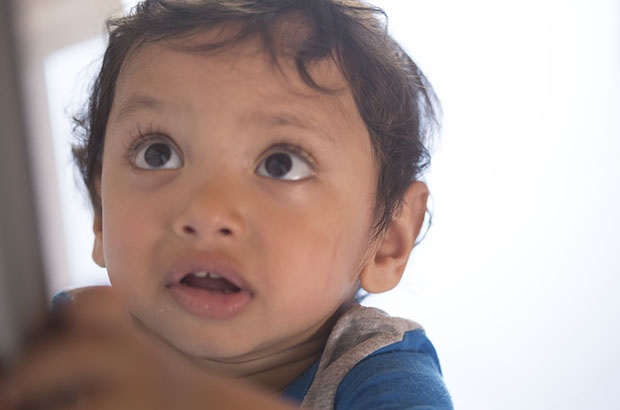 Ayaan Ahmed was diagnosed in 2016 with SCID – a rare genetic disorder that affects the immune system. Without a transplant, he wasn't supposed to live past 1 years old.
Bashiera Parker

In April 2016, Ayaan Ahmed was diagnosed with SCID when he wasn't even 8 weeks old yet. His mother, Shamaa Sheik, was told that without a bone barrow transplant within the following month, Ayaan wouldn’t survive past a year. I sat down with Shamaa in their Cape Town home. From his very first surgery to his most recent, this is the story of Cape Town’s very own "Bubble Boy".

I visited Shamaa Sheik on 5 April 2018. We sat in the kitchen because the dining room was still adorned with gift bags, the furniture rearranged after a birthday party. Mug in hand, she began telling me about her family, more specifically, Ayaan Ahmed.

“I woke up thinking about his birth today because I’m about to give birth again next month,” she said. “His birth was eclipsed, very quickly, when he got sick after two weeks.”

Ayaan had constant crying fits and he was “never a happy baby”, she said. So she took him to the hospital, where they initially recommended drops to calm him. But she'd thought, “I’ve had a child before and this just doesn’t look like a child who’s struggling to break winds.” So she kept pushing until they eventually took him in; she remembers the exact date: “It was 18 March. And we never left the hospital.”

Ayaan’s infection levels kept rising. But after numerous surgeries, from an exploratory lumbar puncture at 2 weeks to an emergency 7-and-a-half-hour surgery that saw the surgeons draining 25ml of pus and no fewer than 40 abscesses on his infant liver, he looked like he was finally on the mend.

She remembers seeing him after the surgery. “It was such a horrific sight – he was hooked onto a ventilator. You know those viral pics you see of children hooked up to machines and tubes? To actually see your own child like that is devastating. You panic when you see machines, beeping, not knowing what’s going to happen.

“I couldn’t even fathom the pain this baby must have been in. That surgery is what saved him. Had he not had that surgery, there’s no amount of antibiotics that would have saved him. The infection would probably have gone to other organs and then it would have just been the end of him. There were abscesses even inside the liver so no meds would have penetrated.”

Before long Ayaan's condition deteriorated once again, so the investigations continued. In April he was finally diagnosed with SCID (Severe Combined Immunodeficiency) – a rare genetic disorder that affects the immune system and makes him particularly susceptible to infections. After his diagnosis, Ayaan was put in strict isolation, and his parents could only interact with him if they were wearing gloves, masks and gowns.

Shamaa clutches her cup in her hands and continues. “As a business analyst you don’t labour on problems, you just look for solutions.” So when she saw his results on a clipboard in his hospital room, she googled and investigated possible interventions. “I saw he needed to have a bone marrow transplant and immediately thought the worst. I imagined somebody drilling into his bones.”

But one of the doctors explained that "transplant" was actually the wrong word – it’s more of a blood transfusion. Even so, it didn’t come without its challenges and hearing her child needed the transplant within the first 3 months of life in order to survive past a year was truly terrifying.

“It was more than likely that he wasn’t going to find a match. Your chances of finding a donor is 1 in 100 000 and in South Africa the registry has only about 72 000 donors. So already you’re at a disadvantage. Then, when you hone in on ethnicity and being mixed race, that genetic combination is near impossible to find.”

Shamaa was desperate for information – “starved”, she said. So she started looking into alternative therapies. Gene therapy, specifically.

After reading various journal articles, drawing up a timeline and meticulously finding more recent trials with higher success rates, all that was left was finding a facility willing to go ahead with the trial.

“Eventually I came across a hospital in Memphis, the United States, and they work on the premise of no family ever receiving a bill from them. They specialise in blood disorders and cancers and they had an open trial for SCID.” The hospital was St. Jude Children’s Research Hospital.

"It only works where a child lacks a matched stem cell donor and he needs to have a specific mutation on a specific gene, which Ayaan has," she explained.

After much back and forth, in March 2017, Ayaan was accepted into the trial, one that Shamaa described as “quite science fiction”. She chuckles when she thinks about the incredible therapy that took just 4 minutes to complete.

I was curious, so I tried desperately to grasped what she was saying:

"So what the doctors do is they remove a patient’s own bone marrow and run the stem cells through a cell separator machine. The machine isolates and removes certain cells, then the doctors find the specific gene that is defective. And we know exactly which gene that is because we had genetic testing done. And the doctors then treat these cells – his own stem cells – with a product that they created in their lab.

"They then take disabled HIV, where the disease-causing elements of the HIV virus is removed, and inject the modified genetic material into the vector, which then transports it to the rest of the body. And it corrects the genetic code."

But by October 2017, Ayaan had come off all his antibiotics. He was taking about 6 or 7 at the time. “He didn’t need it any more,” explains Shamaa. “And for the first time he was able to come out of isolation.”

Ayaan had lost his sucking reflex – he was unable to feed, eat, talk and interact with others while he was in isolation. Shamaa never gave up, but things weren’t always looking up.

While we sat there chatting, Shamaa would stop mid-conversation to tend to and sometimes reprimand Ayaan. He woke up after his nap and came to sit in her arms, he was playing with his toys, paraded around the house, got up to all sorts of mischief and played a little gargle game with his bottle, seeing how loudly he could go while we chatted. “Baby, I’m watching you!” she’d shout, turning to me again and saying, “You know, even that I didn’t think he’d be able to do.”

She fed Ayaan his strawberry yogurt. “Bismillah,” she said, before putting a spoonful in his mouth; he stood next to me as I packed my things away.

Making my way towards the front door she apologised once again for the aftermath of the celebration in the dining room. But I was happy to see it – happy to know Ayaan was there and for the first time able to fully interact with his family.

Ayaan recently had his first party, she explained, for his second birthday.

Do you have an incredible story you'd like to share with us? Tell us by emailing chatback@parent24.com and we may publish it on the site.

Sign up to our weekly newsletter to receive Parent24 stories directly to your inbox.
We live in a world where facts and fiction get blurred
In times of uncertainty you need journalism you can trust. For only R75 per month, you have access to a world of in-depth analyses, investigative journalism, top opinions and a range of features. Journalism strengthens democracy. Invest in the future today.
Subscribe to News24
Related Links
Meet Aaron, the 3-year-old Cape town boy who can’t eat
A rare disease leaves toddler tumbling to the floor up to 100 times a day
Rare Disease Day: we need more research!
Next on Parent24
Local parents share their thoughts on vaccinating their kids against Covid-19