A study by the Canadian Paediatric Society has found "a significant number of young children" required medical care after ingesting cannabis.

Last year the South African Constitutional Court legalised the private use of cannabis in the home, but parents might have to take extra caution with foods that contain the plant.

This is because according to preliminary research by the Canadian Paediatric Society "a significant number of young children" required medical care after ingesting cannabis in the months following Canada's legalisation of cannabis for recreational use in October last year.

Late last year the plant was legalised for private use in South Africa, and more recently CBD oil (one of the many chemical compounds found in the cannabis plant) was approved for use as a medical treatment.

Since then, CBD oil can be found on everywhere, from coffee to pizza, but that doesn't mean it's necessarily safe for kids to consume cannabis.

Must read: CBD oil is legal, and parents can treat their kids without risk of legal action

The Canadian agency collected 16 serious reported cases involving the ingestion of recreational cannabis by children and in each case, the cannabis belonged to a parent or caregiver.

“The number of cases involving young children is striking,” Christina Grant, a pediatrician in Hamilton and co-principal investigator, said in a release.

According to a study by the University of Washington’s Cannabis Law and Policy Project, the "colour, shape, odor and marketing (including branding, advertising, packaging, and more)" of the foods attracts children to edibles.

Share
Next on Parent24
'No such thing as child-proof': How to avoid accidental poisoning in the home 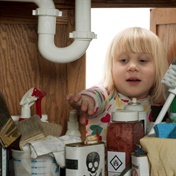