Baby? No thanks! When dad isn't into it 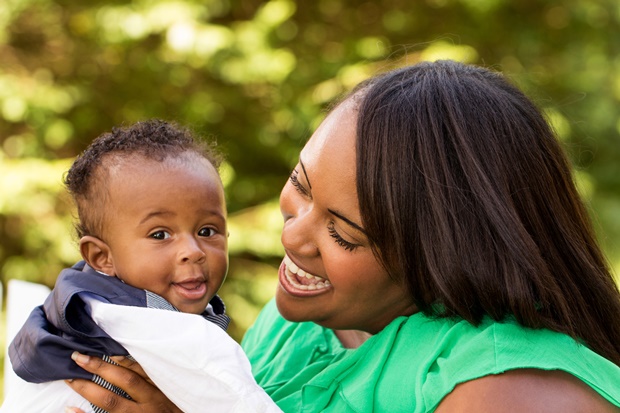 Few of a woman’s life stages are as mythologised as pregnancy. According to the fairy tale, you and he have rampant birth-control-free sex for 3 months, you pee on a stick and – cue the tears of joy – you’re pregnant! Then 9 months of marital harmony and expectant excitement ensue...

Most of us have long since stopped believing in fairy tales. What if, for example, your pregnancy was an accident? You’re not in a stable relationship with the baby’s father? Or even if you are, it turns out baby-daddy is not charmed at the prospect of becoming a parent?

"I regret the absence of a father figure"

Kungeka (35), the mother of 11-year-old twins Bahle and Bathandwa, was living with her long-term boyfriend – and on the pill! – when she discovered she was expecting her boys. She says her boyfriend was “excited at first but became more and more unenthusiastic as the months wore on,” until eventually, sensing a lack of support, Kungeka moved back to her parental home.

After the birth of the children, her ex stopped contacting her, and she was “too immersed in the business of looking after twins to chase after him.” Contact between the children and their father was sporadic until his unfortunate and untimely death in 2005.

Kungeka says she regrets the absence of a father figure for her boys as they now head towards puberty. While she thinks "they feel envy towards other children who have fathers,” she appreciates that family members to some extent fulfill the role of male role model.

She stresses that she spends a lot of effort trying to raise boys who can cook and do housework and take responsibility for themselves, in order to try to break this cycle of male irresponsibility.

Ameera (23), mother of Zaran (14 months), echoes this sentiment. She says she feels keenly the challenge to raise a boy who will become a good man – citing a lamentable absence of good role models for Zaran.

“Much as it would be nice, most kids don’t have fathers in South Africa," she says. "Being a single mother is actually the norm."

Ameera was friends with her son’s father for years before they slept together one alcohol-fuelled night. Ameera took a morning-after pill, but discovered she was pregnant anyway. Her ex-friend’s reaction shocked her. “He was just, like, ‘I never want to see you again.’

He wanted me to have an abortion and now blames me for having had my baby. He doesn’t feel he needs to be involved because he feels it was ‘my choice’ to have my son – even though the choice happened a long time ago when we slept together. He even questioned whether he was the father.”

In a more naive time, says Ameera, she imagined the could raise the baby together as friends. But that wasn’t to be, and she has made peace with the fact (even though she says, “It’s hard when you go to the hospital and everyone else is with a partner”) and relied on her “wonderful and supportive” family as her main source of support.

These days Ameera has almost no contact with the father of her baby. In fact, she says, “Now that I see what he’s really like, I’m glad he’s not in our life. A lot of women whose partners have left should actually be grateful for that.”

Because of Zaran’s age, Ameera has not yet encountered difficult questions yet. “I have no idea what to say if my son asks me about who his dad is,” she confesses. “If he’s not around, I will explain – and he’ll see at school – that not everyone has a mommy and a daddy.”

Ameera doubts if Zaran could suffer from feelings of abandonment because his father has never been a presence in his life, so she reasons there’s nothing for him to miss. However, she acknowledges, “I need to be careful who I bring into his life now.”

"There are no half-measures"

Catherine* (33) mother of three-year-old Faye*, also became pregnant with a man she describes as a “long-term booty call” after practising the withdrawal method of birth control. Like Ameera’s baby’s father, he also suggested she had an abortion, which she rejected outright. “I wanted to have a baby by the time I was 30 and I didn’t want to wait too long.”

Hence, she gave her lover the option to remain anonymous and never become involved in her baby’s life. “I said there were no half measures, if you wanted to be a dad it came with all the responsibilities of sharing child care. The other option was not to be involved at all. He chose that option."

Neither Ameera nor Catherine is concerned that the bonding between them and their unborn babies was affected by the drama playing itself out between during their pregnancies. Catherine feels that the emotional turmoil affected her instead: “What hurt was the slap in the face that someone could just wash his hands of us like that. So I’ve started seeing a psychologist.”

Inevitably, as children become older, they start to ask questions about their history. “When Faye asks if she has a daddy, I answer that we’re still looking for him,” Catherine recounts. “By this I mean that the person who is meant to be her daddy is out there somewhere. I have told her that there is also a (biological) father who helped me make her, and I stress that he left me, not her. I don’t try to put unnecessary information into her head, but she knows she is allowed to ask anything and I will answer.”

Additionally, Catherine has started putting "more effort into trying to find somebody new”.

"He made a big sacrifice for me"

As these brave women demonstrate, it is possible to throw an absent baby-daddy out with the scummy bathwater of a failed relationship. But even a planned pregnancy can make the father-to-be jittery. Mariaan* (35) recounts how she and her partner of 3 years had not been using contraception for years. Because they were struggling to fall pregnant, it was a shock to them both when she did.

But for Andrew*, who has grown-up children from a previous marriage, it was more “bad” shock than “good” shock. “He didn’t speak about the pregnancy for a whole month. It was horrible.”

But, says Mariaan, Andrew always knew that having a baby was non-negotiable for her, just as she always knew he was less keen. “It was a huge issue in our relationship – one we even broke up about once – but he never said no outright.” Mariaan admits, “I know he made a big sacrifice for me – I pushed him all the time. So I can’t be too upset with him for not being as excited as I am.”

Before she fell pregnant, there were times that she did feel resentful towards Andrew: “I thought, it’s so normal to want a child, so why should I feel guilty about wanting that? But now I try to be calm and rational.”

Mariaan feels Andrew is slowly coming around to the idea of being a father again. “You don’t want somebody to stay around just because you are pregnant but I know we have a strong relationship. I also know he’s a good dad because of what he’s like with his other kids.”

So, that guy you share your life with? Remember that he can’t even speak while there’s soccer on TV, and now you want him to imagine what life will be like when baby makes three? Add a hormonal pregnant woman into the mix and it’s a flop-proof recipe for conflict.

If he’s battling demons of his own, try to love him, forgive him and accept his inner turmoil as much as you can – and then have the video ready to capture the evidence of his crocodile tears the day your baby is born.

Do you have a complicated relationship with the father of your children? Email chatback@parent24.com and let us know your story.

We live in a world where facts and fiction get blurred
In times of uncertainty you need journalism you can trust. For only R75 per month, you have access to a world of in-depth analyses, investigative journalism, top opinions and a range of features. Journalism strengthens democracy. Invest in the future today.
Subscribe to News24
Related Links
Where have our fathers gone?
3 things I've learnt as a single parent
Single parents and when to introduce your child to a new partner
Next on Parent24
WATCH | Mom confesses to celebrating her son's birthday on the wrong day