We've rounded up a list of new children's and parenting books that will be gaining popularity this year. Some are old classics that will be revived on the silver screen and some are new and exciting stories, ready to thrill you and your little bibliophile! This is an introduction to Beatrix Potter's classic tale of this mischievous Peter Rabbit. The colourful book is perfect for young ones. It combines learning with playtime. Peek through the holes of this interactive board book to find out who is splashing in the bath, who's curling up to sleep and where the sleepy moon is. An introduction to the world of Dr Seuss. In rhyming verse, the Dr Seuss tells tales of what is waiting for little ones when they meet the Cat in the Hat, Horton the Elephant, Yertle the Turtle, the Great Birthday Bird, The Grinch and other favourite Dr Seuss characters.

Join Christopher Robin on his adventures with Winnie the Pooh and their friends. Explore the Hundred Acre Woods through stories and poems from AA Milne's popular books Winnie-the-Pooh, The House of Pooh Corner, When We Were Young and No We are Six.

I See an Elephant – Elaine Macdonald 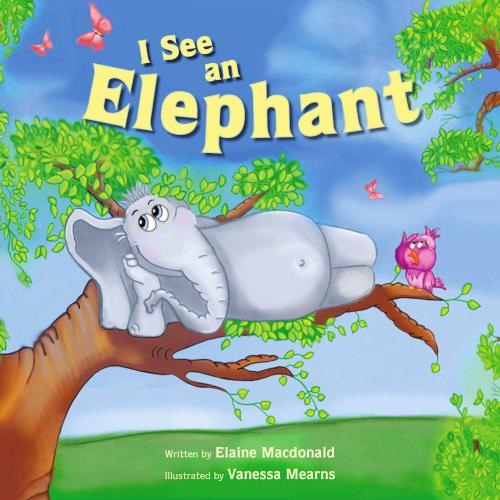 A gentle elephant wishes he was a bird. He begins building a nest, but the birds laugh at him. On the verge of feeling discouraged, Elephant decides to take a stand. He will live his truth! The birds realise he is right and help him build his nest so he can live his life as an ele-bird. Winnie-the-Pooh, Tigger, Eeyore, Piglet and their friends have compiled a list of 50 outdoor activities they think everyone should enjoy before their 6th birthday. Ricky is woken up by the animals because they need help rescuing a lion cub that fell into the river. Can he overcome his fear and jump into the river to save the cub? Discover the world of minibeasts that James encounters on his magical adventure away from Aunt Sponge and Spiker.

Darcy Dolphin and the Best Birthday Ever! – Sam Watkins Darcy Dolphin is back! This time, Darcy joins the sea trouts to lend a helping fin, but things don't go according to the plan. Soon, there's chaos in the sea! Can Darcy sort everything out and throw Ozzie Octopus the best birthday ever?

Meg's father mysteriously disappears after experimenting with the fifth dimension of time travel. Meg and her friends will journey through space and time in an attempt to save her father from evil forces. We loved the book - now the movie is out just in time for the April holidays! Violet, Klaus and Sunny Baudelaire are left orphaned and will have to live with their relative Count Olaf, who tries to steal their inheritance. The children will come together to protect their estate and to uncover the secrets behind their parents' mysterious death. Kay's father is working, as always. But it's Christmas Eve and her mother is fed up! She drives her and her sister, Eloise to Cambridge College where her father works, however, the staff have no recollection of anyone with his name ever working at the college... 16-year-old Simon Spier is gay. No one has any clue except for his pen pal, Blue, who he expresses his concerns to. One day, his emails land in the wrong hands and his secret is threatened. Blackmailed, Simon has to be the class clown's wingman or risk his and his pen pal's sexuality being exposed.

The Truth and Lies of Ella Black – Emily Barr Ella Black lives a seemingly perfect life. Until one day when her parents whisk her off to Brazil, without an explanation. Seeking an answer, she goes through their stuff and discovers her parents aren't who they say they are – and her life is about to be turned upside down. Jasper has synaesthesia – he can see sounds in colour. He’s sure something has happened to his neighbour, Bee Larkham, but no-one else seems to be taking it as seriously as they should be. The knife and the screams are all mixed up in his head and he’s scared that he can’t quite remember anything clearly. Helgesen and Goldsmith have trained thousands of people to reach and achieve their goals. They identify 12 habits that hold women back in the workplace. An essential for any woman who is ready to advance to the next level in their professional lives, or who's scared to return to the workplace after years of raising children. Coming this April. The book tells the story of Ada, a girl born in the South of Nigeria. As an infant, she is the source of her family's concerns. Struggling to conceive, her parents prayed for her existence but something must have gone wrong during their prayers. Ada is prone to fits of anger and grief. She is what they call "born with one foot on the other sides". Abortion is once again illegal in America, IVF has been banned and a new law stating no single parent can adopt is about to be enforced. In a small town in Oregon live four women – a single high-school teacher who is desperate to have a baby; a frustrated mother of two trapped in a crumbling marriage; her adopted daughter who finds herself pregnant with nowhere to turn; and a homeopathic recluse. This novel brings all their fates together when one is arrested and put on trial. If you're a fan of The Handmaiden's Tale by Marget Atwood and Power by Naomi Alderman, this book will surely make it on your list of favourites.

The Tattooist of Auschwitz – Heather Morris Based on a true story, in 1942, Lale Sokolov was given the job of tattooing his prisoners that were marked for survival. A prisoner himself, he tattooed many survivors. He sees a young girl standing in line to get tattooed. Lale says he may have tattooed her left arm but she tattooed his heart. A gripping story about the power of love. As a working mom, Lisa Clark is constantly on the clock and trying to find ways to cheat time. When her days get busier, the last decision she wants to make is what to cook her family for dinner. Lisa Clark Everyday shares some insights into how to provide healthy, balanced and quick recipes for the parent on the move! Whole: Bowl Food for Balance is all about healing your relationship with food. Taking the time to get to know your body, treating it with respect and nourishing it with real fresh food. Eating mindfully, cutting out processed foods and embracing the foods that fuel you and leave you feeling energised is all part of the journey to finding happiness with food. This book has over 90 recipes that are easily adaptable for meat eaters since most of them are vegan and vegetarian-friendly.

What are your family's favourite books at the moment? Email us at chatback@parent24.com and we may publish your comments.

We live in a world where facts and fiction get blurred
In times of uncertainty you need journalism you can trust. For only R75 per month, you have access to a world of in-depth analyses, investigative journalism, top opinions and a range of features. Journalism strengthens democracy. Invest in the future today.
Subscribe to News24
Next on Parent24
Family left divided after sister-in-law is caught on camera stealing gifts during baby shower

Read more on:
children's bookscookbooks
Events
WATCH | 'He died at the school': Local experts unpack the issue of school bullying