From KFC in Japan to scaring kids in Austria, these are the most bizarre Christmas traditions from around the world 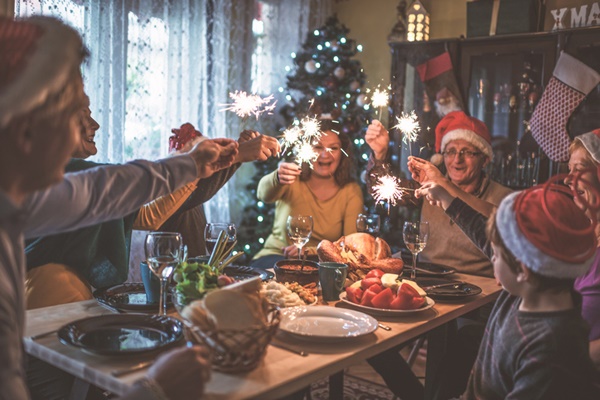 Christmas is an exciting time! We get to spend hours with family and friends, the kids play outside until the sun sets and the adults can finally enjoy their time off from work. While we’re often exposed to images of a white Christmas, we South Africans know there's no snow, warm scarves or eggnog for us in the southern hemisphere.

Christmas has also sort of become more of a consumer’s holiday in the West as large corporations take advantage of the holiday to cash in and, people become rather obsessed with buying perfect gifts. In most countries, however, it’s still viewed as a religious holiday for family, friends and communities to commemorate the birth of Jesus Christ. Others just indulge in a big, fat bucket of Kentucky Fried Chicken.

Here’s how Christmas is celebrated in different parts of the world:

Christmas is not a national holiday in Japan since Christianity isn't a major religion there, but many Japanese people see it as a time to spread happiness. For many couples, Christmas Eve is similar to Valentine’s Day. They go on dates and exchange gifts.

The biggest Christmas tradition in Japan is for families to enjoy a bucket of fried chicken. An advertising campaign in the 70s popularised this tradition with the slogan “Kentucky for Christmas!” It is so popular that most families will order their bucket in advance. A Christmas sponge cake with strawberries and whipped cream is eaten for dessert.

New Year’s Day is a public holiday and the celebrations can last for up to 5 days.

9. Beware the Krampus in Austria

Never mind Santa checking if you’ve been naughty or nice, in Austria, Krampus will find you and punish you. The horned anti-Santa arrives during the Christmas season to beat children who’ve been bad.

In Catalonia, a red-capped ornamental man appears in nativity scenes… with his pants down. But it’s cool because he’s thought to be fertilising the earth.

7. Sitting down with Donald Duck in Sweden

In Sweden most families sit down in front of their TVs around 3pm on Christmas Eve for a screening of Donald Duck.

6. Playing Hide the Pickle in Germany

In Germany, of course families decorate the Christmas tree with tinsel and ornaments, but there’s also one very specific ornament you’d be lucky to find: the pickle. Families hide a pickle ornament on the Christmas tree and whoever finds it wins a reward or, even better, a year of good fortune.

Here in South Africa, we have the privilege of enjoying our Christmas in the summertime. Families will put on their best clothes for Christmas service and then gather at home for a large feast. A typical Christmas spread will consist of warm or cold roasted meat like turkey, gammon, chicken or cornish, yellow rice with raisins, potato salad and an assortment of vegetables and other salads. For dessert, many families will have malva pudding, trifle, ice-cream or custard and jelly with canned fruit.

In some households, the coveted box of Bakers All Choice Assorted biscuits or packet of Quality Streets sweets are unwrapped and the kids have fun picking out their favourites. And If Christmas falls on a super-hot day, most families will opt to have a braai.

Far less pleasant is the story told in some households of the legend of Danny. We’ve never heard this story, but apparently Danny was killed for eating the cookie left for Santa.

4. The hiding of the brooms in Norway

Christmas Eve in Norway is thought to correspond with the arrival of evil spirits and witches. So on Christmas Eve, before they go to sleep, families hide their brooms, but with good reason: to keep joy-riding witches at bay.

Kiviak is a winter food in Greenland made from little auks (sea birds) fermented in a seal skin. About 500 birds are stuffed in the skin and left for up to 18 months to make a delicious treat around Christmastime.

2. Noshing on caterpillars in South Africa

Another South African tradition, slightly higher up there, is eating deep-fried caterpillars of the Emperor Moth on Christmas Day. Another delicious treat many of us are yet to discover.

1. The Tale of the Yule Cat in Iceland

And finally, the most interesting, even bizarre, of all: In Iceland beware the vicious Yule cat that will eat you... if you haven’t bought new clothes to wear before Christmas Eve.

There are many interesting traditions around the world, besides our usual trifle and braai. Some are interesting, some are rather out there (to us at least), but they're all about bringing the family together at Christmas.

Here are a few other traditions we felt were worth mentioning: Argentina also celebrates Christmas in summer. They take the holiday very seriously, as preparations start as early as November! Christmas trees are decorated on 8 December to coincide with the Feast of the Immaculate Conception. Unlike the normal preference for firs, spruces or pines, Argentines use any tree for Christmas decorations.

The main celebration takes place on 24 December. Families will attend a late Christmas Mass. Christmas dinner normally begins at 10pm when roasted turkey or pork is eaten with stuffed tomatoes and salads. In the northern part of the country, goat is preferred to turkey or pork. For dessert, the popular options are pan dulce (sweet pastries) or panettone (a type of sweet bread with candied citrus and raisins).

Gifts are only exchanged among close family members, as gift giving isn’t very common in Argentina. They will then enjoy a display of fireworks at midnight. The next day, 25th, is normally spent napping. A majority of Italians are Catholic and therefore Christmas is a very big deal in the country. Italian families take pride in their nativity cribs and most families will have their cribs displayed, rather than a Christmas tree. The cribs are arranged and displayed from 8 December; however, the figure of the baby Jesus will only be put in the scene on 24 December.

For many Italians, Christmas Eve is when the main celebrations take place. Children will go out to sing carols. They will have a light meal consisting of seafood and then attend Midnight Mass. Upon returning from mass, families will enjoy a slice of panettone and a cup of hot chocolate.

Twelve days after Christmas Eve, Italians celebrate the Epiphany. This day is to remember the Three Wise Kings that were present after the birth of Jesus Christ. Italian children leave out stockings by the fireplace, which they believe will be filled with presents by an old lady they call Befana. In some parts of the country, they believe it is the Three Wise Kings that leave the presents for the children. There was a time under communism when the Christian holiday was banned and many families would celebrate in secret. Since the fall of the Soviet Union, Russians are free to celebrate the holiday again. As in Japan, New Year's Day is the more flashy affair while Christmas is a smaller religious celebration for Orthodox families.

Christmas is celebrated on 7 January as Russian Orthodox uses the Julian calendar. Their advent takes place from 28 November until 6 January, that’s 40 days! Some families fast on the Christmas Eve until they see the first star in the sky. They break their fast with a bowl of porridge with berries, which is normally shared to symbolise unity. They also eat vegan meals of beetroot soup, vegan potluck and vegetable pies on the day. Following this meal will be prayer and a midnight church service.

On Christmas Day, families will have 12 dishes to symbolise the 12 disciples. The main meals on the day are roasted pork or goose, and traditional Russian meat dumplings. Dessert is often fruit pies, dried fruit and nuts. Russians also have popular cookies served during Christmastime which are shaped in the form of sheep, goats or deer. The Ethiopian Orthodox Church still uses the Julian calendar and therefore Christmas here also falls on 7 January. Their advent lasts 43 days, beginning on 25 November. During advent, most families will have one vegan meal. This is because advent is normally a time to fast.

The celebration of Christmas is referred to as "Ganna" where most people will go to church to celebrate. Christmas services can take as long as 9 hours! People dress in white for mass and carry candles and walk around the church three times saying prayers. The priest will serve Holy Communion in the centre of the circle.

At home, the men and boys will play the traditional "ganna" game, which is very similar to hockey. For food, they will eat traditional spicy stew and flat bread.

Twelve days after Ganna, Ethiopians celebrate Timkat with celebrations lasting for three days. This day commemorates the baptism of Jesus.

Also read: Printable: Do you know your Christmas songs? Christmas is celebrated from 12 December until 6 January in Mexico. Children perform processions from 16 December to celebrate the Christmas story by depicting the part in which Mary and Joseph are looking for a place to stay on their way to Bethlehem.

Every night, for 9 nights, the children knock on houses of family and friends carrying candles and asking for a room to stay. They will either be told that there is no room and will have to proceed to other houses, or they will be taken in. If they do go inside, they will say a prayer and will be awarded with a party that includes food, fireworks and games. The most popular game is piñata, which is often decorated as a ball with seven peaks, each representing the seven deadly sins.

The final procession that occurs on Christmas Eve will also be the night a figurine of baby Jesus is put in the nativity crib. In some houses, the nativity scene takes up the whole room. The families will then go to Midnight Mass and come back home to enjoy a firework show.

On 6 January, Mexican people also celebrate Epiphany. They eat a special cake that has a figure of the baby Jesus hiding inside. Whoever gets the figure is appointed Jesus’ Godparent for the rest of the year.

For some Mexicans, the end of their Christmas celebrations is on 2 February. The day is called The Candles, popularly known as Candlemas. Unlike all the other countries mentioned, Christmas is pretty much a non-factor in China with only 1% of the population being Christian. Christmas is only celebrated in the big cities where there will be a few decorations of lights and Christmas trees. Very few people will put up Christmas trees in their houses.

A popular tradition that has sprung up is people gifting each other with apples on Christmas Eve. This is because the Mandarin words for apple and Christmas Eve sound very similar. For Chinese Christians, Christmas is a small affair that is spent going to Christmas service and with family.

We live in a world where facts and fiction get blurred
In times of uncertainty you need journalism you can trust. For 14 free days, you can have access to a world of in-depth analyses, investigative journalism, top opinions and a range of features. Journalism strengthens democracy. Invest in the future today. Thereafter you will be billed R75 per month. You can cancel anytime and if you cancel within 14 days you won't be billed.
Subscribe to News24
Next on Parent24
WATCH | 'I was so sad': Chrissy Teigen drops her daughter's first tooth down the sink