From Tales for Adventurous Girls to The Prison Letters of Nelson Mandela: 12 new books for you and the kids We've rounded up a list of books that will be hitting shelves from July to December 2018.

The school holidays are soon coming to an end. But that doesn’t mean they, and you too, can’t take some time out, sit back, and curl about under the blanket with a good book. And we’ve just put together a round-up of new and exciting releases hitting the shelves from now and up until December. Check out the list below.

Once Upon a Rhinoceros by Avril van der Merwe Rhinoceros has a magnificent horn, which all the animals admire. All, that is, except Hippo. Hippo is jealous of Rhino’s horn, and desperately wants one of her own. So while Rhino is asleep, Hippo steals Rhino's horn only to discover that wearing a large and heavy horn comes with its own challenges. This tale teaches kids that there is no room in the world for jealousy, only compassion and kindness. When rule-breaking Rafe has to train his new dog in obedience school, you know things are about to get really ruff!

“Oh boy, oh boy, oh boy! I've been waiting for ages to tell my story, and now it's finally happening! Being Rafe's dog isn't always easy, but it is always EXCITING! I've got so much to tell you about: The amazing Catch-A-Doggy-Bone kennel (the silly humans keep mispronouncing it Khatachdorian), the first time I was ever called a GOOD BOY - And my nemesis: the vacuum cleaner!

“These were all the most paw-some parts of my doggie life - until the evil Mrs. Stricker threatened to send me back to the pound if I didn't learn to behave. Now Rafe and I have to go to obedience school and win the trophy for Best Trained Dog... or else!”

Ladybird Tales of Adventurous Girls: With an Introduction From Jacqueline Wilson 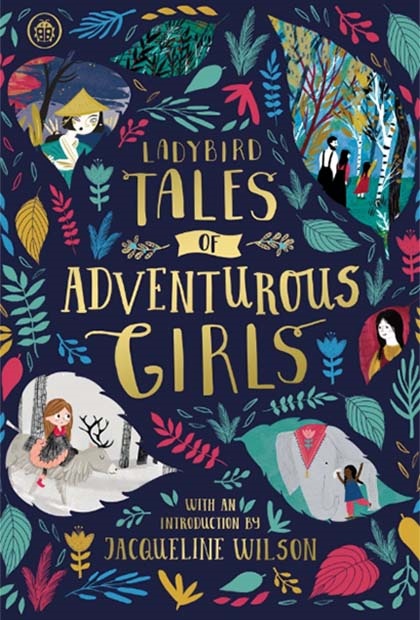 Girls can save the day too, and they always have.

Join six adventurous girls from around the world as they use their wits, courage and strength to overcome the odds in this colourful, illustrated collection of Ladybird Tales.

Diary of a Wimpy Kid: The Meltdown by Jeff Kinney When snow shuts down Greg Heffley's middle school, his neighborhood transforms into a wintry battlefield. Rival groups fight over territory, build massive snow forts, and stage epic snowball fights. And in the crosshairs are Greg and his trusty best friend, Rowley Jefferson.

It's a fight for survival as Greg and Rowley navigate alliances, betrayals, and warring gangs in a neighborhood meltdown. When the snow clears, will Greg and Rowley emerge as heroes? Or will they even survive to see another day?

Every Day by David Levithan Each morning, A wakes up in a different body. There's never any warning about who it will be, but A is used to that. Never get too attached. Avoid being noticed. Do not interfere. And that's fine – until A wakes up in the body of Justin and meets Justin's girlfriend, Rhiannon.

From that moment, the rules by which A has been living no longer apply. Because finally A has found someone he wants to be with, every day.

The book has recently been adapted into a film.

Are We All Lemmings and Snowflakes? by Holly Bourne Welcome to Camp Reset, a summer camp with a difference. A place offering a shot at “normality” for Olive, a girl on the edge, and for the new friends she never expected to make – who each have their own reasons for being there. Luckily Olive has a plan to solve all their problems.

But how do you fix the world when you can’t fix yourself?

A Map of Days by Ransom Riggs Having defeated the monstrous threat that nearly destroyed the peculiar world, Jacob Portman is back where his story began, in Florida. Except now Miss Peregrine, Emma, and their peculiar friends are with him, and doing their best to blend in. But carefree days of beach visits and normalling lessons are soon interrupted by a discovery: a subterranean bunker that belonged to Jacob’s grandfather, Abe.

Clues to Abe’s double-life as a peculiar operative start to emerge, secrets long hidden in plain sight. And Jacob begins to learn about the dangerous legacy he has inherited – truths that were part of him long before he walked into Miss Peregrine’s time loop.

New wonders, and dangers, await in this brilliant next chapter for Miss Peregrine’s Peculiar Children. Their story is again illustrated throughout by haunting vintage photographs, but with a striking addition for this all-new, multi-era American adventure—full color. Inspired by the Broadway smash hit, Dear Evan Hansen, comes the big-hearted, coming-of-age story of grief, authenticity and the struggle to belong in an age of instant connectivity and profound isolation, in this novel of the same name.

When a letter that was never meant to be seen by anyone draws high school senior Evan Hansen into a family's grief over the loss of their son, he is given the chance of a lifetime: to belong.

He just has to stick to a lie he never meant to tell, that the notoriously troubled Connor Murphy was his secret best friend.

Memo From Turner by Tim Willocks During a weekend spree in Cape Town, a young, rich Afrikaner fatally injures a teenage street girl with his Range Rover but is too drunk to know that he has hit her. His companions – who do know – leave the girl to die.

The driver’s mother, a self-made mining magnate called Margot Le Roux, intends to keep her son in ignorance of his crime. Why should his life be ruined for a nameless girl who was already terminally ill? No-one will care and the law is cheap. But by chance the case falls to the relentless Warrant Officer Turner of Cape Town homicide.

The Prison Letters of Nelson Mandela To be published upon the centenary of his birth, The Prison Letters of Nelson Mandela is a landmark work: the first, and only, authorised and authenticated collection of correspondence spanning the 27 years Mandela was held as prisoner. The eagerly-anticipated new novel from the worldwide bestselling author behind the Emmy- and Golden Globe-winning HBO series Big Little Lies is back with her new novel, Nine Perfect Strangers.

Could 10 days at a health resort really change you forever? Nine perfect strangers are about to find out... In her memoir, a work of deep reflection and mesmerising storytelling, Michelle Obama invites readers into her world, chronicling the experiences that have shaped her – from her childhood on the South Side of Chicago to her years as an executive balancing the demands of motherhood and work, to her time spent at the world’s most famous address.

With unerring honesty and lively wit, she describes her triumphs and her disappointments, both public and private, telling her full story as she has lived it – in her own words and on her own terms. Warm, wise, and revelatory, Becoming is the deeply personal reckoning of a woman of soul and substance who has steadily defied expectations – and whose story inspires us to do the same.

What were your favourite books when you were growing up and what lessons did you learn from reading? Tell us by emailing chatback@parent24.com and we may publish your comments.

We live in a world where facts and fiction get blurred
In times of uncertainty you need journalism you can trust. For only R75 per month, you have access to a world of in-depth analyses, investigative journalism, top opinions and a range of features. Journalism strengthens democracy. Invest in the future today.
Subscribe to News24
Related Links
New books for your toddler
Books to help teens feel understood when they're feeling misunderstood
From classics to new stories: new books for your 3- to 6-year-old to discover
Next on Parent24
WATCH | 'Mummy, please stop': Duchess Kate jokes about the hobby her royal children can't stand

Read more on:
books
Events
WATCH | 'He died at the school': Local experts unpack the issue of school bullying