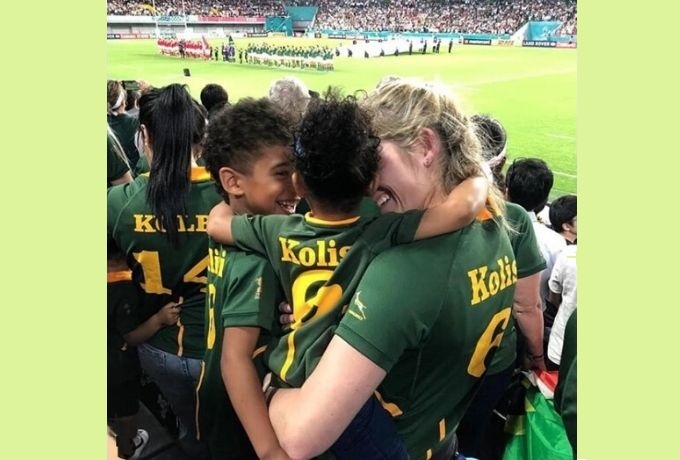 Behind every great man... (via @siya_kolisi_the_bear)

History was made in 2018 when Siya Kolisi was named the player who would be leading the Springboks.

A truly inspiring moment for South Africans, as it was the first time in the team's (then) 127-year history that a black player was chosen as captain.

One year on, and the Boks captain has added yet another page to the history books, leading the Bokke to World Cup victory.

So, what is it like to be partners in the parenting game with such a central sporting figure? We caught up with rugby's first lady, Rachel Kolisi, who spoke to Parent24 about her life as a mom and wife.

The mom of four says she wasn’t all that impressed with the star athlete when they first met, but somewhere along the line she knew he would be special to her.

“Siya and I meet at a dinner with mutual friends in Stellenbosch. I didn’t think he was anything special that night, actually thought he was quite rude because he didn’t greet us when we arrived. We became very good friends a few months later, and during that time I realised I needed him in my life, somewhere – as a friend, partner, whatever – just somewhere he needed to be there,” she shared.

Also see: Guide to being a happy blended family

And that he is. The two wed in 2016 but even before then, their family was already formed.

The couple opened their home to Siya’s siblings, Liyema and Liphelo in 2014, and in 2015 they welcomed a baby boy, Nicholas Siyamthanda, instantly becoming a blended family.

Liyema and Liphelo were living in foster care after Siya’s mother passed away, and in 2014, Siya and Rachel officially adopted them.

Rachel says her relationship with the two kids came very naturally and their bond is clearly evident.

In November 2017, the family went from five to six when Rachel and Siya welcomed their baby girl, Keziah.

South Africans can’t get enough of the Kolisis

Rachel is massively popular on social media, racking up more than 70 000 followers on Instagram, where she regularly shares the family’s experiences, and they keep giving us Aww moments to remember.

The video below featuring Nicholas belting out the national anthem like a pro went viral in 2018.

If you had a bad day today. Turn the volume right up ?? June tests - we’re ready

But life as a wife to a sports star is not as glamorous as it may seem.

“It’s very tough raising a family with an athlete, Rachel admits. “They travel so much, they are hardly around. So sometimes having to be mom and dad is hard. He’s also tired when he’s home because he spends most of his day training and his body gets sore.”

The two always prioritise couple time though and Rachel says Siya is particularly good at keeping the romance alive in their relationship.

“He’s very good at organising time away when it’s just him and me. We also try to have a date night once a week or every two weeks,” she told us and added that since they started their family really young, the two plan on travelling the world once the kids are all grown up.

And how does mom take care of her own needs?

“I nurture myself by exercising daily, that’s usually what I enjoy as ‘me time’.”

This girl I am meeting in the first picture lives in a drug house. She is one of many I met yesterday and let me tell you, these kids are living in a home environment you and I could not possibly imagine. I spent the morning yesterday at Zeekoevlei Primary School in Lotus River. One of their teachers @cemoneswartz contacted me on social media saying she was really wanting to take her grade 1’s on a outing, some of these kids haven’t experienced anything else besides their school and home environment. And being a “fee free” school funds are not available to them. They ask parents for a monthly donation of R20 a month roughly 60 of 832 pupils bring in a donation. I went out there to see if there was anything else I could try help out with and raise some awareness about the school. Here’s a few things I learnt: 1. The principal is passionate about getting this school to the highest standard 2. The teachers working there are angels, and are often the only source of stability some of these kids have The school is in great condition they’ve just moved to a new school but the principal has a “to do list” on his white board with over 60 points on it. I can’t do much but I’d really like to do something. What they’re really in need of is a storage space a shipping container is ideal. And they have a library full of donated books but unfortunately very old books that kids won’t relate to at all. What I’d like to help with • a shipping container for storage • some volunteers to help sort the library • donation of books (something age 6-13 could read and relate to) • coveting/repairs of library books Please let me know if anyone can help with any of the above. Otherwise the school says their doors are open to anyone at anytime. The list is long but it’s doable. If we could all just play a small part. Thank you so much @kaylinpetersenphotography For joining me and capturing this experience ????

Looking through Rachel’s Instagram account, it’s clear that the couple share a passion for philanthropy, and the mom told Parent24 that they are planning on giving back in a special way.

"I’m not involved in any specific charities. If there’s a need somewhere and I can do something about it, I will. We are both very passionate about it and hope to start a foundation in the near future."

The future is definitely bright for the Kolisis and we can’t wait to see how life unfolds for the loving family!

When asked if Rachel had any advice to share with other blended families in South Africa, Rachel had some pretty solid words: "It’s important to remember that our time on this earth is limited, and we don’t know when it ends for us. So keep forgiving and loving."

Words to live by for sure.

Do you have a blended family like Siya and Rachel? Was it hard getting along or was the bond there from the beginning? Share your story with us and we could publish your letter. Do let us know if you'd like to stay anonymous.

We live in a world where facts and fiction get blurred
In times of uncertainty you need journalism you can trust. For 14 free days, you can have access to a world of in-depth analyses, investigative journalism, top opinions and a range of features. Journalism strengthens democracy. Invest in the future today. Thereafter you will be billed R75 per month. You can cancel anytime and if you cancel within 14 days you won't be billed.
Subscribe to News24
Related Links
"My step daughters will always have a place to call home"
Confessions of a soon-to-be step-mom
Blended parenting, anyone?
Next on Parent24
Got an excitable kid like Prince Louis? Here's how to keep a child calm at family celebrations