IN PICS: These images of a young Harry prove that he's always been a rebel It's official, Harry and Meghan have permanently hung up their royal titles bidding farewell to the world in their last engagement this past Monday, 9 March at Westminster Abbey for Commonwealth Day.

It's safe to say we're all waiting with bated breath to catch the couple's next moves.

And while their departure has saddened many a royal watcher, it isn't all that surprising.

Harry has been known as the party prince, and in his 2018 biography Harry: Conversations with the Prince, author Angela Levin shared that his mom, the late Princess Diana noticed that even as a child Harry possessed a "general gusto."

And we have the photos to prove it!

Here's a look at a young Harry with gumption on full display. 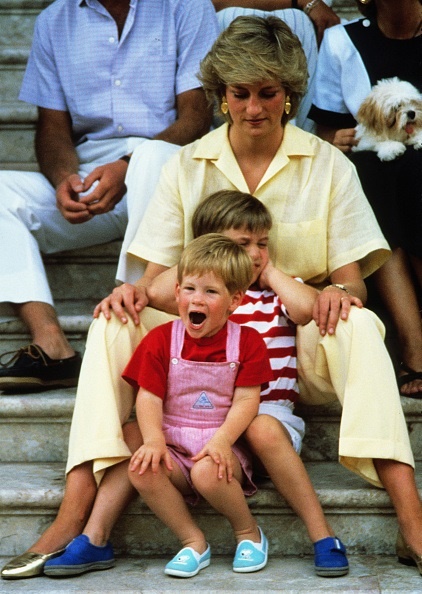 Princess Diana, with sons Prince William and Prince Harry on holiday in Majorca, Spain on 10 August 1987. Prince Harry plays with a dog watched by Prince William, Prince Charles, Prince of Wales and Princess Diana, Princess of Wales and the Spanish Royal Family during a holiday on 10 August 1987 in Palma, Majorca.

Prince Harry sticking his tongue out much to the suprise of his mother, Princess Diana Trooping the Colour with Prince William, Lady Gabriella Windsor and Lady Rose Windsor watching from the balcony of Buckingham palace on 11 June 1988. Princes William and Harry leaving hospital after visiting the Duchess of York and her daughter Princess Beatrice at Portland Hospital on 8 October 1988. Prince Harry enjoys the company of Spice Girls (l/r) Mel B, Emma and Victoria, when the young prince met the female entertainers while attending their concert in Johannesburg, South Africa on 1 November 1997.

And if the pictures aren't convincing enough, you have to watch this throwback video featuring a preschool aged looking Prince Harry and his toddler cousin, Princess Beatrice engaging in a friendly fight.