To-you-for-me gifts and 4 other bad presents Ever wondered why your mom bought you that inexplicable thing? You’re not alone.

I have spent years doing consumer research related to gift giving. In my field, conventional wisdom surmises that when gifts fail to please recipients, it’s accidental.

But I’ve determined that sometimes people give bad gifts on purpose.

My personal interest in this dynamic stems from a gag present my dad gave me when I was a kid. As I unwrapped his box in a box in a box, the anticipation grew bigger as the boxes got smaller.

When I found that the last box was empty, it crushed me. He thought it was funny. (In my dad’s defense, this happened on April Fool’s Day, an occasion on which we had no gift-giving traditions.)

But I never could shake my urge to learn why someone would give such a rotten gift. It can be hard to recover from a disappointing gift, even when it’s supposed to be a gag. iStock

The total cost of unwanted gifts is high, both in terms of dollars and in damaged relationships, I’ve found in my research.

This sum of course leaves out the many unwanted gifts that are regifted, ignored, sold, donated or thrown away.

No data exist about how many presents are cruel, but this problem has implications for brands, retailers, marketers and consumers at a time when the National Retail Federation predicts that Americans are spending an estimated $678.75 billion a year on presents.

Depending on whether you’ve got similar tales of woe, you may (or may not) be surprised to learn that many people intentionally give gifts with no concerns for the recipient’s feelings.

Although it seems nonsensical to give someone a gift that will damage a relationship rather than strengthen it, some people deliberately do just that.

Not only are these returns a drag for businesses, they harm friendships and fray family bonds.

To undertake a study of mean presents, the first of its kind, I did in-depth interviews individually with the people in 15 relationships.

Each interview with one member of these couples began with the question, “Can you tell me about gift giving between you and your partner over the course of time?”

In these interviews, couples often spoke about gifts exchanged within their families, too.

To broaden the study, I searched family-focused message boards at the Babycenter.com website using the keyword “gifts” and analyzed the more than 400,000 relevant results.

People, it turns out, really like to talk about gifts.

They talk online about great gifts and horrible gifts. They seek help from others to figure out what went wrong. They like to complain when they suspect that someone has intentionally given them an awful present. 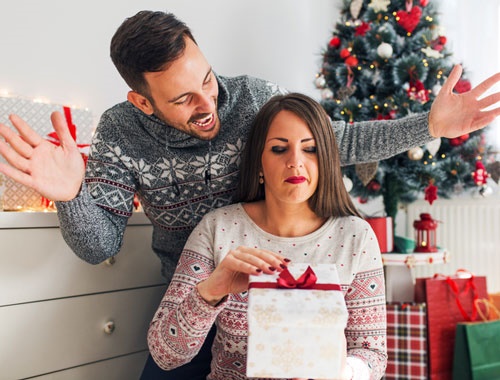 When your loved ones give presents that don’t suit you, it can get awkward. iStock

After reviewing the data, I identified five categories of inconsiderate gifts.

The first are gifts that are essentially personal affronts. One of my personal favorites is the pregnancy test a woman actually gave her childless daughter-in-law for Christmas.

I was also shocked by this other example that is purely aggressive rather than passive aggressive: A woman bought her grown son a book about Christianity knowing that he had given up the faith and didn’t appreciate being reminded of his mother’s disapproval.

One sports-loving man in my study epitomized this category by giving his wife a big-screen television for her birthday, just in time for the Super Bowl that she didn’t plan to watch.

For example, after a man in my study gave his wife lawn furniture for Mother’s Day, she told him she hated the pattern and asked him to return it. Instead, he bought her more of that furniture for her birthday a few weeks later.

This category of crummy gifts signals a deteriorating relationship. Indeed, this couple got divorced not long after these incidents.

It’s always hard to select gifts when the giver doesn’t know or especially care what the recipient would want.

These obligatory presents, often exchanged and opened in front of groups, are not malicious gifts. They are simply meant to check a box. If everyone gathering round a Christmas tree is going to be giving each other something, you may feel safer giving your Aunt Sally a completely random thing even if you have no clue about what she’d like.

One woman bought her husband clothes for his birthday even though she knew he would end up returning most of them. When asked, “If you knew he wouldn’t like it, why did you buy it?,” she replied, “Probably just so he would have something on his birthday.” She felt the need to give a gift, but no need to please her husband.

Gifts given for bragging rights are intended to “out-gift” someone else. A common example of this is what happens when someone gives their grandchild a present the kid’s parents specifically said not to buy.

One woman in my study reported that her parents were competing with her in-laws to give her kids increasingly large and extravagant gifts over her objections – then posting about it on Facebook.

To be sure, these categories may overlap. Ill-conceived gifts can be be both aggressive and competitive, and “to-you—for-me” presents can also be confrontational.

Typical Americans are buying 15 gifts this holiday season. If any of yours sound like they fit the mold of these crummy presents, there’s still time to alleviate the suffering by not going through with your plan to give someone a cruel gift – or at least to apologize if it’s too late.

What's the worst gift you've received or given? Tell us by emailing to chatback@parent.com and we could publish your story. You might want to anonymous for this one. If so, let us know in your email.

Sign up to our weekly newsletter to receive Parent24 stories directly to your inbox.
We live in a world where facts and fiction get blurred
In times of uncertainty you need journalism you can trust. For only R75 per month, you have access to a world of in-depth analyses, investigative journalism, top opinions and a range of features. Journalism strengthens democracy. Invest in the future today.
Subscribe to News24
Next on Parent24
WATCH | Matthew McConaughey shares his adorable childhood thoughts about being a father

Read more on:
gift ideaschristmas
Events
WATCH | 'He died at the school': Local experts unpack the issue of school bullying